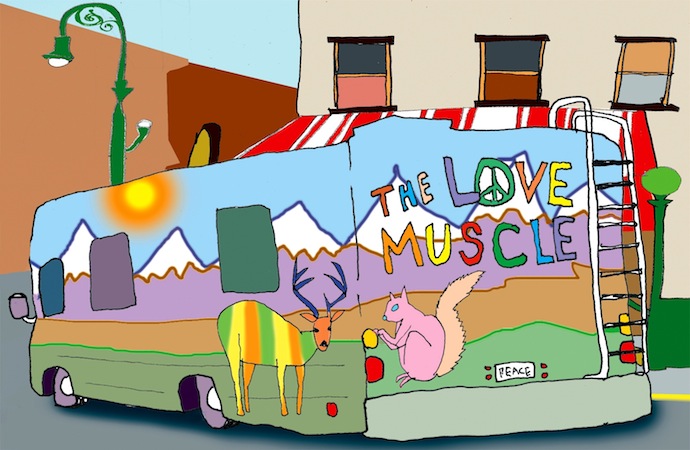 Melt Down Low Down

I knew it was going to get weird when I saw my ride. My buddy Julia had a friend of a friend with a RV she’d rented for a weekend’s journey to the Catskills Mountains. When I saw it pull up in the middle of a busy Brooklyn street, my jaw dropped and I immediately started laughing that uncontrollable kind of laughter that comes out of you because you can only say holy shit so many times before people start looking at you funny. It was a magic bus straight out of the world of Ken Kesey’s Merry Pranksters. Covered completely in colorful murals of mountains and wildlife, it even had a name hand-painted on the back like a ship: The Love Muscle. The interior was as ~groovy~ as the exterior, fully equipped with all the amenities of home plus disco lights. Not without some anxiety did I stow my tent in the baggage compartment. Was I ready for this? Could I flex my love muscle? I remembered an old issue of Burn Collector I’d read a decade ago whose author outlined his own philosophy for dealing with the anxiety of the unknown: “Just say yes to everything.” When you do, you simply let events happen to you agreeably, slouch forward with an idiot’s grin on your face, and end the hell of second guessing. Nine times out of ten you’ll incorrectly come off as charismatic, people will think you have a great attitude, and even as you knock their things over they’ll be asking if you want to hang out again next weekend. Thus are memories worth recalling made. He called this zen-like approach, “The Non-Stop Party Wagon.” He’d meant it metaphorically, but there I was, literally hopping on board. Say what you will, but it’s got a much better ring to it than “The Anxiety Shuttle.”

The Love Muscle pulled into Uncle Pete’s Campground in Phoenicia, NY (pop. 309) early Friday evening. Traffic was bad and being a passenger in the Harvey-RV ended up being a lot of work. With a designated driver you’re inclined to get down to the serious business of saying YES! immediately. Luckily, my buddies Jason and Orin were there already and offered to help put my tent up. Elsewhere, faces old and new, similarly engaged in the rituals of personal wilderness maintenance, all looked excited and happily lost in anticipation of whatever it was that was going to happen. Not a bad vibe in the crisp mountain air, and whether they knew it or not, they too had hopped on the wagon.

The fixed point around which this strange universe revolves is Andy Animal. He’s a bear of a guy that’s been a well-loved fixture of New York’s punk scene for the last decade or so, notably fronting the late and great punk band, The Stalkers. He’s the kind of person everyone has a (good) story about or did something crazy with, the guy who’ll be remembered late in one’s life long after others’ names and faces fade into oblivion. That’s to say, a natural host for a wild party.

A large open field dominates the center of the campsite, in the middle of which the most hardcore of the melters—a sort of honor guard identifiable by Park Ranger hats and led by Andy himself—had erected a gigantic party tent complete with a fully serviceable wooden stage the previous evening. I honestly don’t remember everyone who played the first night, but sometimes not getting to keep all your memories is the price one must pay for living in the moment. Besides, you can be sure other people will make it a point to remember for you. There are flashes of smiling people dancing, the sweet sounds of distorted guitars reverberating through the woods, and me saying YES! to jugs of spiked lemonade offered by friends and strangers alike. We’ve all been there (right?). I do distinctly remember the spectacle of a band whose bassist had taken one mushroom too many. He didn’t miss a beat (that I noticed) but he was hiding behind his drummer while playing live with a look of sheer terror on his face. It was impressive; though I was thankful our roles weren’t reversed, thinking, “man, that’s some tough shit.” At some point I just sat down on the stage obliviously, dropping out of life Coors light in hand, all Dionysus and no Apollo. The last thing I remember was hearing “Dirty Hands” by The Black Lips blaring pleasantly, thinking, “you know, their 3rd album was honestly pretty underrated,” and then turning my head in disbelief to see that they were in fact playing right beside me.

I woke up in my tent fully clothed and not a small bit ashamed, but my spirits quickly lifted when I remembered that is just the way you do it in the woods. Opening my tent to take in the mountain air, I was immediately reminded I was still on the wagon. A girl was walking around in a red union suit—the old timey full body long underwear with the helpful escape hatch in back—only, this being the melt down, there was no back. Lovely!

Chris was trying to get his motorcycle out of a ditch. “Whoa what happened, man?” “I… I dunno, will you just help me get it out?” It seemed like a lot of Saturday involved figuring out what had happened Friday. I was covered in scratches and cuts. If anybody asked me if I was having fun, I could just brazenly stick out my arm and brandish the party-stigmata for inspection. Easy. Age makes its presence felt in the distance between actually doing something stupid and recalling it later with your friends. Unfortunately, declining returns are the rule. By that standard, at least, the fountain of youth was within grasp of everyone who couldn’t remember Friday night.

After eating I walked with Jason to the Esopus Creek where we saw friends relaxing on rocks in its center. The current was surprisingly strong but we waded out and took in the sights, one of which was Andy floating down stream on a raft flanked by two giggling women. “He really knows how to have a birthday party,” we all agreed. Some people were already going for it by late afternoon. One group had taken LSD and was now walking around in circles carrying piles of rocks. Not my style, but they seemed to be having a good time and I reckoned they were being more true to the YES! than I was. I heard my friend Mikey’s band, Pop Zeus, playing through the woods and though I didn’t see him, it was almost better to hear him while sitting around a campfire. As darkness fell, we went back to the main field. Some bikers had arrived and were good naturedly flashing their headlights at confused revelers trying to give them a makeshift light show. A naked girl with flowers in her hair scooted by me on a bike and it seemed unremarkable. My buddy Jesse had cooked a community batch of Jambalaya and everyone happily ate their fill waiting for the main event.

Mungo Jerry was the party’s headliner. Remembered for the hits “In the Summertime,” “Lady Rose,” and perhaps the greatest pair of mutton chops this side of the 19th century, he belted out an hour’s worth of great blues-infused hippy jams, backed by Jay Rattlesnake and Daddy Longlegs, to the delight of all those gathered. You wouldn’t have known he wrote the songs 40 years ago because his energy was infectious and the crowd responded in kind. His manager, a tough and grizzled British rock veteran who seemed pulled straight-out of a 1960’s Michael Caine mob film, looked menacingly at all of us. I like to think that was just his way of saying “you kids are all right.” Finally, Andy surprised those assembled with an ad hoc Stalkers reunion set so powerful that it blew out the power. And then there was darkness.

This night I had not been as true to the wagon and allowed myself a few “no’s” so I could have a better look at those who’d said YES! The sky’s canopy in the Catskills is unbelievable and the stars sparkle so brightly you’d swear you were on drugs. It’s hard to convey how dark it gets and getting a little lost is par for course. Finding your next destination becomes an epic task with a built in sense of accomplishment that in retrospect maybe a bit much, but while you’re there its feels pretty great. Everything is like trying to tie your shoes wearing oven mitts; doable, but challenging. I found myself doing the rustic party-flaneur thing for hours, zig-zag wandering from fire to fire, saying my hey’s, wow’s, and whoa’s. Every now and again someone more melted than myself would run screaming out of the woods, clearly having a wonderful time.

The river looked lovely in the starlight. “This kind of thing is why every single country rock band in the 70’s, like, literally ALL of them, had to have a song whose title was some variation on Down by the River, or no one would take them seriously” I thought. Not a bad racket at all.

Meanwhile, The Love Muscle had interior dance lights blazing and shone like a party beacon in the darkness for those who’d lost their way. I was going to go inside but it seemed, well, occupied. A guy I knew was sitting on a picnic table in front of the bus watching the action. “I really need to get my whiskey out of there, but it seems like it would be in poor taste to interrupt,” I said. I can’t forget the way his eyes flickered with eagerness when he replied, “I’ll go in if you do.” NOPE. Even then I had a feeling I was abandoning the greater purpose of the Meltdown. I was not ready for that kind of nirvana. I had failed.

After one final romp down at Andy’s cabin, I peaced out back to my tent and tried to get some sleep. This plan was spoiled when I awoke to a slobbery, wet breathing noise. At first I thought someone was getting frisky in my personal woods space, but it turned out a black bear was raiding our hot dogs. I was terrified at the time, but eventually I figured they were just a more deadly variety of raccoon and grudgingly accepted the inevitable, and anyway, if a bear wants your food, the only thing left to say to it is yes.