To the Bone Is Nothing New: Depicting Eating Disorders Has Always Meant Glamorizing 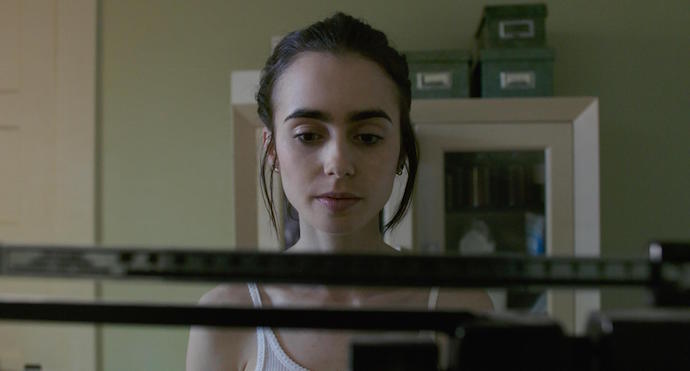 There’s a footnote in Marya Hornbacher’s Wasted: A Memoir of Anorexia and Bulimia that I remember reading twenty years ago. It mentions Steve Levenkron’s novel The Best Little Girl in the World. I remember Hornbacher’s vinegary assessment (“a rather romanticized account, written by a doctor intent upon demonstrating not the experience of having an eating disorder but rather his own genius in curing them”), but more clearly I remember another detail, how the television-movie adaptation of the book was popular in the kind of eating disorder treatment centers where I would one day check in. Bad idea, showing the movie, Hornbacher thought. Patients were abuzz with gossip: pssst—the star, Jennifer Jason Leigh, dieted down to 86 pounds.

The 1981 movie was hard to find when I was a twelve-year-old in a house without cable in 1997, but a few years later everything changed. The A/V desk in the basement of my high school copied VHS tapes for students who filled out a slip of paper and explained their academic needs. I invented project after project to round out my video library, one comprising “Saturday Night Live” episodes taped off TV—and eating disorder movies. When I finally got my copy of Best Little Girl, it felt like I had scored drugs.

I saw the tape last month, sitting in the closet organizer of my childhood bedroom with the typewritten label facing inside the box so my mother wouldn’t see, part of a tiny ED ward on my shelf: For the Love of Nancy, A Secret Between Friends, Kate’s Secret, Little Girls In Pretty Boxes, Perfect Body. I had those twenty-eight-minute info videos shown in Health class, the ones with factoids and synth music, along with a second tier of features depicting eating-disordered characters in minor roles: Girl, Interrupted; a circus of stereotypes called Drop Dead Gorgeous; even Zoolander, for Matilda’s bulimia admission (pre-orgy with Derek and Hansel’s gang, on that spinny bed). I was always searching for An Anorexic’s Tale: The Brief Life of Catherine, but by the time I was old enough to order the documentary online I’d stopped collecting.

I craved these movies when I was younger, newly anorexic, newly purging anorexic, newly bulimic. These days, I’m a decade into being ED-NOS (eating disorder not otherwise specified), which doesn’t even have its own adjective. Still, I’m sure if ED-NOS felt new to me today, I would have To the Bone queued up, stat. The new Netflix dramedy about anorexic, prickly Ellen (Lily Collins), and the un-conventional doctor (Keanu Reeves) who helps her change/recover, is currently garnering considerable buzz: when it was only five days old, the trailer had more than a million views on YouTube.

But views are not equally motivated, especially with a subject as polarizing as eating disorders. To the Bone, which premiered on July 14, is causing potential viewers to do everything from demand trigger warnings to wave their eating-disorder-awareness flags. In pro-anorexia communities, Lily Collins stands poised to become this decade’s Mary-Kate Olsen or Calista Flockheart: perfect “thinspiration.” Others fear the depiction of tropes of anorexia (late-night exercising, stabbing food, measuring, fainting, to name a few) and a familiar catalogue of ED signifiers (plate, scale, hospital gown, wrist) will set-off people predisposed to this illness or send others who have already suffered from it into relapse. As Harriet Brown, author of Body of Truth and Brave Girl Eating, says, to susceptible viewers any film that depicts eating disorders “winds up being a kind of how-to.”

To the Bone’s star, Lily Collins, writes about her own anorexia in her memoir Unfiltered; like Jennifer Jason Leigh, she lost weight for her role, though I’m not sure Leigh worked with a nutritionist as Collins did. The film’s writer/director, Marti Noxon, is an eating disorder survivor, too. In a diary she kept while attending the Sundance Film Festival, where To the Bone screened, she shared pictures of her eggs and confronted the stress that can still invade her meals; when she ordered ice cream served in a cookie bowl, she joked it was a cause to consider relocating to Utah. With director and star brandishing badges of survival and recovery-in-progress, it’s hard to argue an intentionally misguided, deleterious moral design undergirds the film, but no one is making that argument.

What people are arguing is that To the Bone, like its VHS forebears in my closet, romanticizes, glamorizes, prettifies and glorifies and fetishizes eating disorders. Yes, I say, and I blame the bodies on-screen—those you’ll see in To the Bone and those you’ll see when you scroll through your Instagram feed or even watch Wonder Woman. There’s not much to argue, but people keep arguing—what, thinness, glamorous?!—and this maddening effort keeps keeping us from a nuanced dialogue that might actually begin to decrease the prevalence of eating disorders.

How much black eyeliner will she be wearing? I joked before I’d seen a single image from To the Bone. The answer is plenty. The film romanticizes a Byronic wafer of womanhood, the Gothic consumptive Susan Sontag imagines in Illness as Metaphor meets the manic pixie dream girl meets Daria. Lily Collins is a human Coraline in the tradition of Natalie Portman in Black Swan. But if the conversation about glamorizing eating disorders were merely cosmetic, it wouldn’t be so problematic.

The truth is eating disorders and film and television are tightly braided. “It’s not possible, in this culture, to depict anorexia in way that’s not quote-glamorous,” says Harriet Brown, “because our whole culture worships thinness so much. That’s the foundation that we are all steeped in: we all have incredibly strong implicit biases around thinness as well as overt ones.”

Despite the residue of The Crucible or Reviving Ophelia that’s seeped into the commotion surrounding this film, I don’t think the cultural hullabaloo is rooted in fear for Lily Collin’s wellbeing or the even lives vulnerable to the eating disorder she depicts. Frankly, I think our reaction reveals we are neck-deep in shame. Though we live in an age of body positivity and sensitivity, when christening a fashion trend “heroin chic” would be met by public backlash and a social media bonanza, that doesn’t mean our culture’s long-standing ideals have been erased. To the Bone glamorizes the slim body, the ballerina body, the ethereal body—so, yes, the anorexic body. In the trailer, playing with her food, wrapping her fingers around her upper arm to measure its circumference, spine stegosaurus-prominent, with text that flashes “I am healthy” “I am strong” “I am in control” in a menacing way, Collins presents as sick, but let’s mince no words: in a bikini, holding a slice of avocado toast, her body on Instagram or Snapchat would be enviable to some. Sexy to some. Healthy to others. Too thin to a few.

By getting stalled on the question of whether or not eating disorders are glamorized in their depiction (they are, case closed), we are culturally yet again distracted by skinniness. The thin body, sick only in the half-light of diagnosis, becomes the most interesting angle in the room and the knotty, maddening causes and effects of eating disorders—let alone the saga that is recovering from them—goes unaddressed.

Like Collins’ depicts in To the Bone, I spent my adolescence in treatment. I started the diet that became anorexia in anticipation of my thirteenth birthday, when I hoped to “look right” in a jean dress from Limited Too. My birthday came; I tried on the dress, had my mother return it, and proceeded to lose thirty pounds in just over two months until I was, coincidentally, Jennifer Jason Leigh’s Best Little Girl weight. When summer creeped up and I got too small for all my shorts and the new pair my mother bought me (khakis, Target) fell around my ankles, I was caught.

From that day until I graduated from college, I had a diagnosis and a team and—all the puns intended—a bone to pick with the world. It was the same bone to pick that I’d had when I wanted to look right in that Limited Too dress, and though that bone has been recast and reset, it’s probably still the same bone that, say, made me write I Must Have You, a novel about eating disorders, and women trying to live bodied lives with them, in the wake of the heroin-chic 90s.

The controversy generated by To the Bone has me wrestling with a question that was central to my thinking while writing my novel: Why are we so hesitant to let our discussion of eating disorders in art go beyond the superficial? If we know that eating disorders, at root, are not about food or vanity, when do we get to stop asking the glamour question? And if we want to reshape the culture that breeds eating disorders, we need to do just that. We need to seek greater insights from the discourse To the Bone invites. When you consider 20 million women and 10 million men will have an eating disorder during their lives; when eating disorders have the highest mortality rate among all mental illness; when there is egregious funding disparity—according to the National Institutes of Health, “Research dollars spent on Alzheimer’s Disease averaged $88 per affected individual in 2011. For Schizophrenia … $81. For Autism $44. For eating disorders … $0.93”—this film is a somber reminder that, like depicting suicide, depicting an eating disorder probably will be inherently helpful and harmful. Both. And that’s okay. It’s necessary.

The discussion surrounding To the Bone reminds me of anthropologist Dr. Anne E. Becker’s powerful work in Fiji. Becker’s study famously looked at what happened to the body image of the island’s inhabitants during a time of rapid social change. In interviews conducted in 1998, three years after US television began its broadcast on the island, Becker found “study respondents indicated their explicit modeling of the perceived positive attributes of characters presented in television dramas, but also the beginnings of weight and body shape preoccupation, purging behavior to control weight, and body disparagement.”

Lily Collins crunching in the trailer is Rocky Balboa running the steps, moved by a compulsion that many of us long to experience or reclaim, a singular drive we have been taught to respect. We call it perseverance. Discipline. We see it depicted and we want to skip a meal or don a sweat suit, to get in the ring.

The last time I watched The Best Little Girl in the World, I was nineteen. I lived in a narrow dorm room, a single that I’d been granted mid-semester because my bulimia was too much for my roommate. It was good to be alone. I could stay up for hours, eyeballs tight as grapes from purging. One weekend I went home and brought back all my eating disorder movies. I didn’t watch them to get triggered; I wanted to feel comforted, to see familiar faces, but mostly they were awful. They were Lifetime movies or their kinfolk, and they were syrupy, reductive, boring. If To the Bone is funny and humane like Vanity Fair says it is, then kudos. It’ll be ahead of the pack.

Still, a weird thing about Best Little Girl is just how unglamorous Jennifer Jason Leigh looks. One minute, she’s all apple-pie-cheeks and sturdiness; the next, her skin is gray; even her hair is frail. The space between her thighs isn’t a gap; it’s a chasm. Charms, some viewers might have thought; thinspo. But none of that did it for me. The only triggering part in that movie, the glamour, was the scene when Leigh’s character rips a feeding tube out of her arm. I liked that. It showed how ugly my life could be.

JoAnna Novak’s I Must Have You is available now from Skyhorse Publishing.

Tags: Marya Hornbacher, The Best Little Girl in the World, To the Bone