THE STRANGE POSITION OF DYING: A REVIEW OF MARY RUEFLE’S MY PRIVATE PROPERTY 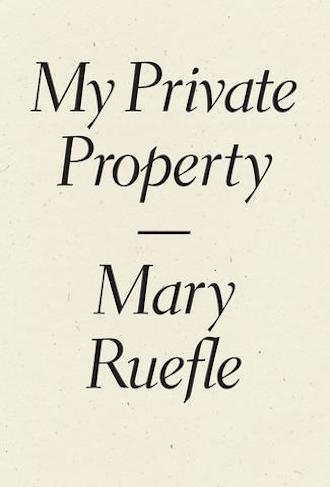 The epigraph to Mary Ruefle’s My Private Property comes from Walter de la Mare’s Memoirs of a Midget: “The cumbersome bones, the curious distance from foot and fingertip to brain, too; and those quarts and quarts of blood. I shuddered. It was little short of a miracle that they escaped continual injury; and what an extended body in which to die.”

The body, simultaneously most private of properties and most contested of spaces. The news of the miracle so close to the news of death. These aren’t complete sentences because sometimes a verb can deceive. An is or an are can reduce a constellation of meanings to a dry and misleading singularity.

The antidote is metaphor, itself an incomplete and dangerous structure which carries, along with its capacity for expanding and attaching images, meanings, and ideas, a simultaneous machine that can be exploited, intentionally or not, toward ends the author might not endorse, or which the sentence itself was not made to bear.

The history of the reading of poetry is full of problems of these sorts. No matter what is said, in a place such a poem read at the president’s inauguration, the context will douse the figurative and create new resonances, some the poet might have imagined, some no one might have imagined. Still, we who love poetry soldier on alongside those who make poetry.

Mary Ruefle’s new book, a collection of prose poems, mostly, follows her two best books – the poetry collection Trances of the Blast (“The world was designed / to overwhelm and astonish. / Which makes it hard to like”) and the essay collection Madness, Rack, and Honey (“The words secret and sacred are siblings.”).

It is always unfair to compare what precedes to what follows rather than examining what follows on its own terms. The terms offered by My Private Property are rather more challenging. The title suggests as much. The first sentences of the first passage (“Little Golf Pencil”) suggest as much:

“At headquarters they asked me for something dry and understated. Mary, they said, it’s called a statement. They took me out back to a courtyard where they always ate lunch and showed me a little tree that was, sadly, dying. Something with four legs had eaten it rather badly. Don’t over-emote, they said. I promised I wouldn’t but I was thinking to myself that the something-with-four-legs had certainly over-emoted and that the tree, in response, was over-emoting now, being in the strange position of dying.”

How does a reviewer begin to try to summarize a book that begins in this mode and never lets up?

And how does a reviewer begin to try to describe the experience of first reading a book like this in a moment in which it seemed like the world was beginning to stabilize, and then reading the book a second time, for ostensibly professional purposes, in a political moment in which a great sadness looms upon the land, one that aims its threat first at a multitude of legally vulnerable targets?

One begins (probably wrongly) to believe that Mary Ruefle had anticipated this moment, and hid her propensity for prophecy behind a scrim of metaphor. In this book, passive resistance has become the “creed of keys,” taking the “form of what their tormentors call obstinacy.” In this book, “Blue sadness is sweetness cut into strips with scissors and then into little pieces by a knife, it is the sadness of reverie and nostalgia.” In this book, April, which has 58 days, after which it can’t go on, is represented by a photocopy of a “Cryalog” on lined composition book paper.

The title piece itself begins in a lament that “no one today displays any interest in the art of shrunken heads” and ends first in implication (“How can I call myself benevolent? I want, as my personal private property, twelve human heads”) and second in terrible reflection (“It occurs to me I wanted to die that day. Why else would I have skipped school and wandered off alone and found a friend among the dead? One who thrilled me to life?”).

Sadness and reckoning both demand the rejection of orthodoxy.

Here is a paragraph titled “Personalia” that you should read if you want to know something about this book:

“When I was young, a fortune-teller told me that an old woman who wanted to die had accidentally become lodged in my body. Slowly, over time, and taking great care in following esoteric instructions, including lavender baths and the ritual burial of keys in the backyard, I rid myself of her presence. Now I am an old woman who wants to die and lodged inside me is a young woman dying to live; I work on her.”

I hope I have in some small way described what it feels like to read this book, which ends a discussion of an encounter of “The Sublime” with this news: “Could see from the corner of my eye that there was an incredible view, but couldn’t look.”

I feel that I have inadequately described this book, which I did not like, but which, like so few books by other writers and so many books by Mary Ruefle, clings to me as I try to abandon it, which might be one measure of what we’re trying to mean when we say “art.”