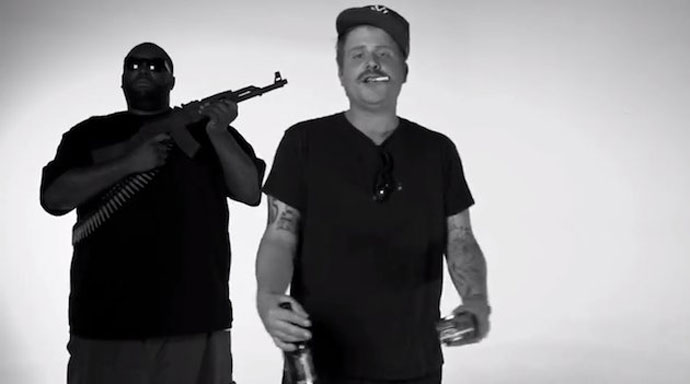 Killer Mike has felt like a man out of his time––alone in calling out, well, anybody: Bill O’Reilly, sure, but also Oprah Winfrey and Bill Cosby, essentially anyone dodging the socioeconomic wreckage that blacks trek through on a daily basis. He’s taken cues from his favorite rappers to date, who have called themselves public enemies, cursed at the police and dared to spell America with three K’s, as in Ice Cube’s debut AmeriKKKa’s Most Wanted. In response, Killer Mike is often told that he should become a politician, a pastor, or a priest.

Sure, he has spoken to cheering crowds on behalf of Troy Davis and Occupy Atlanta. He has teared up when he speaks of his family––his father, a former cop; his mother, a former drug dealer; and his grandmother, a civil rights activist––and sputtered out a list of their grievances, bellowed of how they have become our grievances. But Killer Mike has never sounded as entrenched in our unrest as he does in his fifth album. Solely produced by El-P, R.A.P. Music is Killer Mike becoming the authority figure that he’s long wanted to become––not a politician or a priest, but the South’s own Ice Cube, sneering fearlessly at everyone daring to inflict the pain and strife that, in his eyes, has made his music all the more necessary.

El-P is credited for revamping New York underground hip-hop in the ’90s; Killer Mike bred off the same decade’s Stankonia standards, though still equipped with battling quips like, “Give you men a pause just like a comma, bitch.” So like friends diving into each other’s record collections, they leap into a few good-natured homages to highly revered rap standards. Breaks resembling the introductory beats of Apache’s “Tonto” ignite “Jojo’s Chillin’,” the album’s tribute to Slick Rick’s storytelling. And in “Southern Fried,” Killer Mike seems to revisit OutKast’s dirt-floor basement studio the Dungeon––where, apparently, the humidity would randomly trigger its drum machine––as he revs up his Georgian gait to a flow that could match Big Boi’s spit for spit.

But being the hip-hop pyromaniacs they are, Killer Mike and El-P rekindle far more than their love for old-school music. In “Untitled,” helium-fueled infrequencies cue Killer Mike’s pacing through his greatest fear––dying before his wife. (“Will my woman be Coretta, take my name and cherish it?” he says. “Or will she Jackie O, drop the Kennedy, remarry it?”) In “Don’t Die,” even the smallest worms of synths inspire Killer Mike to blast a generation-old story of police abusing their badge-bestowed power. And before that, El-P sends out snippets of addresses regarding the Iran-Contra affair into a sick, unsettling fog––all Killer Mike needs to recall the presidency that loomed over his childhood: “They declared a war on drugs, like a war on terror / but what they really did was let the police terrorize whoever / but mostly black boys…”

Some of R.A.P.‘s stories are endearingly familiar, others disturbingly so. Many of them break down why he turned to Public Enemy and N.W.A.’s unflinching reporting-to-tape of the West Coast crack epidemic. Few remind us of whom Killer Mike trusts with his future. (The answer, right now––the people creating R.A.P., which stands for Rebellious African People’s music and ranges from Ray Charles to Sade.) On paper, R.A.P. Music is Killer Mike absolutely certain of how his past has played out––knowing fully well why he needed rap as an ’80s child and precisely how it inspired him to speak louder, be heard. And when set to El-P’s retro-futuristic flourishes, R.A.P. Music reiterates that yes, Killer Mike can scorn like his childhood idols while also necessarily––at times disconcertingly––sounding very much in the present.