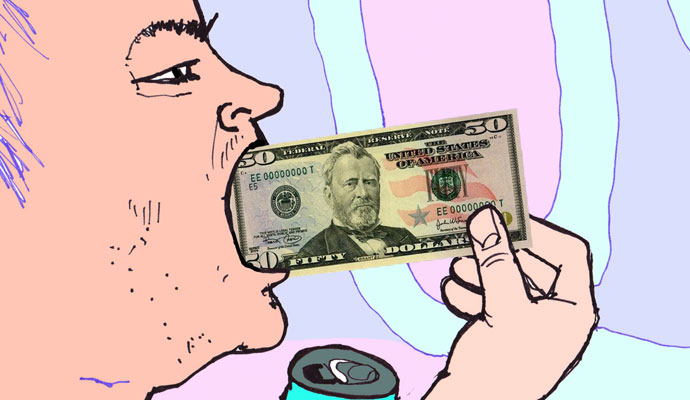 The summer before I left for college I spent a lot of time fucking off and drinking at Rebecca’s father’s house. His physical presence gave enough of an illusion of parental supervision to comfort my mother’s misgivings, but his lack of moral presence made the home a juvenile delinquent free-for-all.

It was there, in the smoke-filled living room, I met Josh. He was lying lengthwise on the couch when he called me over to him. Using a massive block of beer at his feet as a prop, he dove into a one-man show outlining what a balla he was, how he had provided beer for the party, and what all of this money could do for me.

“Girl, I could spoil the fuck out of you. I got so much funds.” I wondered what kind of girl his game worked on, but knew it wasn’t me. This sophisticated 19-year-old drunk on Natty Lite was looking for something more substantial in her life.

I promptly rejected him by scrunching my nose, rolling my eyes and starkly replying, “I don’t care about money.” Then flicked my hair and lit a cigarette––a cheap one.

Josh would not be swayed by my eye rolling and hair gymnastics. He pulled me close to him and said, “Girl, money don’t mean shit to me; you think I give a fuck about money? I’ll eat this money.” What could have been a figurative statement emphasizing his ability to spend money quickly was not. He pulled out a 50 dollar bill from his wallet to prove that his proposition was quite literal; he intended to eat his money.  I called his bluff.

A circle of people surrounded us and began egging him on. Then he did it. He ate the 50 dollars. He ripped it up into little pieces, chewed it up, and washed it down with the cheap beer that he provided for the party. He consumed the entire bill except for one tiny corner, which he pushed into the palm of my hand and said, “There you go, now you can tell everyone about the crazy guy that ate 50 dollars for you, and you have proof.”

This moment, when a suburban gang member ate 50 dollars to prove he wasn’t shallow and thus a worthy mate for me, was one of the most romantic things that anyone had done for me. It was met with blunt rejection, but it was still a high water mark in my romantic life.

My life is romantically deficient. I don’t date men that do things for me; I prefer the ones that ignore me and toy with my emotions. The only time anyone threw anything at my bedroom window to get my attention was an attempt to bribe me into having sex with him with stolen merchandise, and the only time I have ever received flowers from a guy he was living with another woman.

The lack of romance in my life is no one’s fault but my own. I’m incredibly loving and nurturing. I’m not ugly, stupid, or boring. I graduated from college with honors, work out, and can carry on an interesting conversation with just about anyone. There is no obvious reason that I should be single. Among a list of excuses to why I am so painfully alone: (I am picky, my emotional wall is bigger and greater than the one in China, I keep odd work hours) is the honest one: I love assholes, but sadly assholes make great lovers and horrible boyfriends.

The thought of dating a really square, nice guy is something that I put off in my teens and early twenties for one of the more boring tasks I would tackle in my thirties. It’s something I thought I could get around to after I was done having fun. Some wonderful guy with a great sense of humor, a job, and obvious lack of baggage would ask me out and I would think, “How sweet, how normal, how safe he is. This is the kind of guy who would never hurt me. This is the kind of guy I should really be with.” Before the images of picket fences and a lifetime of security has solidified in my imagination an overwhelming fear washes over me, and the next thing I know I am getting felt up in the DJ booth by an unemployed pot dealer with a stomach I could wash towels on or magically back together with my emotionally unavailable ex-boyfriend and sitting at home while he’s motorboating strippers at Flashers.

These things never end well; they usually end with me crying and clutching a martini while I blast Fiona Apple and pledge “never again” on my Facebook wall. And after a decade of dating bad boys and assholes (usually the same ones repeatedly) I have no idea how to function in a stable relationship.

For a few months I saw a counselor about my problems with men. I imagined seeing a therapist about relationship problems would be like paying someone to be your best friend for an hour. I would tell her the stories that were too embarrassing or too graphic to recount over drinks with my girlfriends and she would give me the advice and blunt honesty that my friends are too much of a friend to give. It would be like a wonderful cocktail hour with Oprah, only sober but just as expensive.

I was wrong. Therapy was like having an awkward lunch with a relative you never see who wants to recount all of the most mortifying events in your life in grave detail and define you by them. Furthermore, my therapist asked me repeatedly at every session if anyone has ever touched or molested me. It was as if she wanted me to be a deranged and dark Sybil instead of the confused and angst-filled Angela Chase that I was to get her money’s worth out of school.  I spent my hour telling her stories about men playing grabass with me at a bar to satisfy her need for sexual trauma stories and then switched therapists.

My new doctor agreed that my problem didn’t lie in some phantom abuse but simply a lack of sensibility when it came to dating. We made Venn diagrams about what I need, want, and can’t have when it came to men, and she told me that I should look at dating as a screening process instead of an intramural activity. Eventually my insurance ran out and I was thrown out to the wolves alone and returned to my bad habits.

After my last dating adventure ended with a number change and a purchase of mace, my best friend Joey intervened. “I won’t stand for this anymore,” she said. “For your 30th birthday your present is going to be a Match.com profile you don’t have the password to. I’m taking over your love life.” Losing control over any part of my life, especially my love life, sounds like Dante’s 10th and most terrifying circle of hell. I protested but we eventually compromised. I admit that I know absolutely nothing about dating, but I can retain some say in my love life. I will solicit and follow the advice of my friends, loved ones, and the occasional stranger. I pledge to enter the world of internet dating, single mixers, and speed dating and to quit dating the same dicks, assholes, and players and picking up the same unavailable men in dingy bars; to get out of my comfort zone and open myself up to dating a completely different type of guy: a decent one.