The Loving Heart of Captain Fantastic 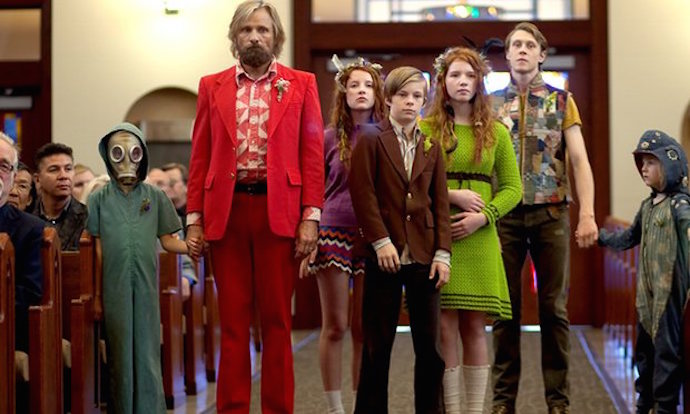 It’s been said that good stories “defamiliarize” the familiar, making the familiar “strange” to reveal the underlying complications of realities we often take for granted. Captain Fantastic, with its outsider’s perspective, invites us to reconsider the implications of strange realities too familiar for us to warrant regular reflection. Among the realities Captain Fantastic brings to mind are iPhones, shopping malls, grocery store food, and the extent to which we censor ourselves for the sake of our accepted notion of “protection”. This is a film that can alter the way you see the world outside the theater.

Above all, Captain Fantastic is a beautiful film that loves its characters, its strange situations, and the many complexities of humanity’s attempts to love. It’s a film that, through the event of a tragic death, celebrates the intricacies of life. It respects its viewers’ intelligence enough to refrain from positing an infallible method of navigating this strange universe. Rather, by playing extremes against each other, it invites us to consider existential possibilities our mainstream culture does not readily present.

Viggo Mortensen is spellbindingly magnificent (and, in one scene, full-frontally naked) as Ben Cash, an intelligent and idealistic father who has removed his six children from what he sees as a society of aimlessness and greed. For months, Ben’s wife Leslie (Trin Miller) has been absent from the wilderness utopia they’ve wrought, recovering from an illness in a hospital near her wealthy, disapproving parents. At the news of her passing, the film’s events are set in motion. All hop aboard the family’s big school bus to travel to the Southwest for the funeral being held against Leslie’s wishes, and we viewers follow a brilliantly atypical Hero’s Journey where the “special world of adventure” is actually the world with which we are most familiar. Thus, the defamiliarization begins.

Before this film, I knew writer/director Matt Ross exclusively as the actor who plays good ole Gavin Belson from HBO’s Silicon Valley, my vote for contemporary television’s best comedy. Belson is a flat character (intentionally so, undoubtedly), a sadistic CEO prone to violent outbursts who stands for greed, selfishness, and corruption. After seeing Captain Fantastic, which critiques the selfish lives of billionaires like Belson, I perceive new layers to Ross’ performance. Ross is anything but a flat, one-dimensional person. Clearly, he thinks complexly about the contradictions of the human soul, about how the desire for love may not manifest in the actualization of love, about the lies we tell ourselves over and over again to maintain the perspective that we know more than the next person, that we alone have found the way, that we we we exist at the center of this vast universe. In different ways, Silicon Valley and Captain Fantastic showcase the negative consequences of such close-minded mentalities.

Captain Fantastic is being called Little Miss Sunshine meets Into the Wild. At a certain point, this connection falls flat. Unlike Little Miss Sunshine, its quirkiness comes from the characters’ backgrounds, from the conflicting impulses their antisocial situation creates, rather than for the sake of quirkiness itself. Unlike Into the Wild, it refrains from overly romanticizing the desire to live in the wild, thus allowing questions regarding the desire’s validity to rise. As the movie progresses, Ross reveals that as flawed as unquestioning obedience to society’s values can be, even more detrimental is the perspective that unquestioningly abhors all one believes society represents.

A more accurate comparison I’ve yet to see mention would be with William Faulkner’s As I Lay Dying. Like Addie Bundren, Leslie death sets the wild and unpredictable journey in motion. In spite of her lack of physical presence, she becomes the most influential character. It’s her complications of character that animate all conflicts depicted, that yield so many conflicting perspectives on how to proceed in the wake of her death. Along the journey her death yields, the Cashes, like the Bundrens, gradually reveal the neurotic discord that’s been lurking in the shadows. Beneath their utopian vision, the Cashes are flawed as any family who lives in the society Ben detests.

But Ross refrains from judging these people, even Leslie’s strictly Catholic father, Jack (Frank Langella at his best). Jack could so easily have become a villain, standing as he does for all Ben despises—excessive wealth, excessive influence, and religious indoctrination. Yet Ross reveals Jack to be a caring man who, like Ben (and the rest of the characters), wants what he believes is best for his Leslie and her six children. The problem is, none of these loving people agrees what form that optimal reality should take.

For Ben, it’s total honesty. It’s answering his kids’ questions, regardless of whether PC-culture deems these conversations “appropriate.” But Ben’s solution also involves situations that are extremely dangerous, such as having his children scale a vertical rock face that yields a fractured hand for his disgruntled and critical son, Rellian (Nicholas Hamilton). It involves stealing from a grocery store, because, well, it’s Noam Chomsky Day! Surely they must celebrate that great thinker’s existence! Like Jack’s vision from the opposite end, Ben’s vision comes from an intention of love in a human heart inevitably flawed.

Even those afflicted with the greatest flaws deserve love. There’s a reason two minutes of screen time are devoted to Ben and his daughter’s discussion of Vladimir Nabokov’s Lolita. His daughter concludes that as much as she despises Humbert Humbert for his deplorable pedophilia, so she sympathizes with his struggle and the visceral depth of his love. She feels these contradictions within her, and she knows not how to respond. In response to his daughter’s intelligent reflections, Ben simply nods. As filled as we are with contradicting emotions, always we owe each other our deepest love and understanding.

Ross appreciates the necessity of balance. These characters, regardless of intelligence and open-mindedness, argue their positions with a solidity that is simultaneously respectable and deplorable: they live with conviction, yet they negate important perspectives. Above all, Ben’s journey is to discover the Middle Path, the path that Leslie represents, to open his mind enough to help his children live as healthy and balanced lives as possible in an overwhelming reality. While we may wish to recreate the Garden of Eden, life after the Fall is the world in which we live. Still, the impulse to love remains, and in a society run by greed and corruption, it is more important than ever before to spread that love into the fallen world rather than locking it away in the distant woods. It’s the corrupted who need our love the most. When we glimpse outside our familiar perspectives, we will recognize that they deserve it, too.