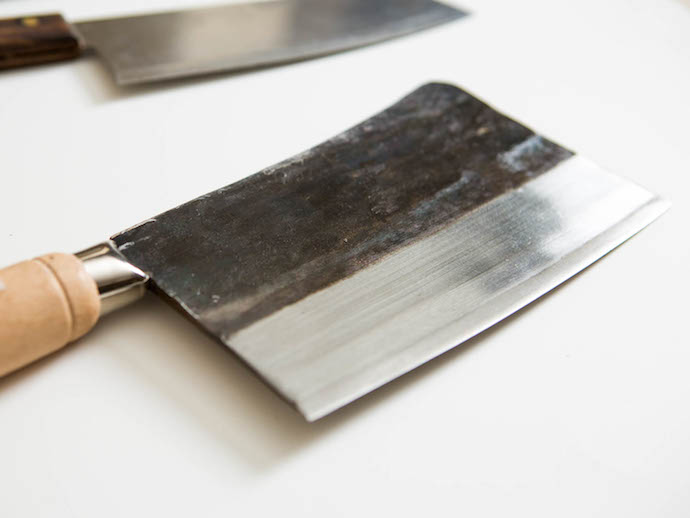 The knife caught some light from the dying sun and fired a warning shot of white heat at my eyes. It said keep running. So I turned my head and did just that. I ran across the high school field and towards the pale, infield dirt of the baseball diamond. The same one I used to stand four foot something in, leather glove in hand, knees bent and waiting for the next ball to be slapped in my direction across the yellowing grass from my Dad standing at home plate with a congregation of baseballs at his feet. I ran across that field and towards that same diamond because I had slammed the freezer door into Dad’s nose.

There was lots of blood. It was on the door, on his face, and across my arm. Dad had cornered me in the back of our apartment kitchen and the only way out meant getting past him standing shirtless with a knife in hand and spit accumulating at the crevices of his mouth from the yelling. The yelling that ensued after he had said my Mother was fat and I said speak for yourself asshole. The same yelling that had once called me a faggot after finding me in my twin size bed one afternoon with an arm over Ed. The yelling that once called me a son of Satan after finding an empty bottle of Boone’s Farm in my backpack. The same yelling that called me a momma’s boy when I started yelling myself because of all the yelling he was doing.

So I slammed the freezer door in his face.

The knife wasn’t intended for me. Not at first. It was for a stack of salami he was slicing up on the counter under a paper plate. He didn’t drop the knife, though when he started yelling or when his hands came to his newly broken nose. Dad was even still holding the knife as he gave chase in pursuit of me, slicing air through the cloudless afternoon sun, running barefoot out the door and down the flight of stairs, past Ed’s apartment with his father’s POW-MIA flag in the window to block out light. Ed, who was my first kiss, and who would sometimes stand on second-base so we could practice double plays, the same second-base I was running toward and away from my own widowed and divorced Dad.

Hard to say which came first to be honest—the widowed or the divorced. Mom was out the door for good and died fifteen minutes later. Her white two-door overturned and crushed into a freeway sidewall. “Failure to merge properly” was something written in the police report I had found underneath the TV remote control on the side table next to the sofa a few weeks after.

Dad didn’t cry about it. She had the monopoly on the crying in that apartment. She’s the one who went through the boxes of lavender-scented tissue atop of the toilet, on the plastic table where we ate dinner and on the ground, just below her side of the bed where a bedside stand once stood but was removed and put next to the couch.

“We spend more time on the sofa than in bed,” Dad had explained as my mother protested with a nervous cough and loud sips of Diet Rite soda until finding her voice again and asking, “Where we gonna put the honeymoon photo, hun?”

That photo was still by the tissue box on the dark brown carpet by her side of the bed propped up in its oval frame when the police knocked on the door the afternoon she died.

“I knew she’d be back,” Dad said as he muted the TV to answer.

I left the tissues but swiped the photo that night, putting it safely on my window sill underneath the plastic blinds I always had down and twisted shut. I put it there because Dad wouldn’t find that framed photo of them on some beach in Hawaii, flower leis over Dad’s floral Hawaiian shirt and Mom’s silky white dress, their sun tans glistening from the bright flash of the camera, muting the colors of the sun melting into a dark Pacific Ocean behind them twenty six years and some change ago. Dad looks drunk. Mom looks like something else. Brown-haired Farah Fawcett, white teeth catching the flash, one hand with ambulance red nails placed lightly across Dad’s stomach.  If I stare at it long enough, I have to say they look happy. Then again, you can’t tell shit from photos. It’s amazing how well people can hide all the hate, hurt, anxiety, fear, and sorrow of their lives when some chump with a camera yells cheese. Just find a picture of a president or dictator with a pretty woman or their favorite dog and it’s hard to believe that’s the same guy who gave the OK to drop bombs on a desert town or starve half a nation. Just saying.

There are wedding bands on the fingers of Mom and Dad in that honeymoon photo for a reason, though. It’s two people in love. Or at least, that’s what I like to think. They don’t know yet about the overdue credit card debt and the unpaid mortgage on the house they’d lose or the financial crisis that would come. They don’t know how Dad will lose all his accounts when the small guys get bought out and consolidated into some multinational corporation. That honeymoon photo is taken before Dad lost his job and gained weight and Mom had to go to work at a box store during the holiday months to fund dad’s newfound love of beer and before she slept with what’s-his-name who worked in appliances because he was 25 and she was over 40 and so who can blame her. Judge not says the Bible. I don’t believe in that stuff but I like that quote.

Instead it’s just a photo of two people in Hawaii between all the drinking and screwing they were probably doing there. That’s why I like it, I guess. After mom died, that photo was the only thing that made any sense. It was the only thing that could explain the mess their lives had become over the next two and a half decades. In its own little way it explained why I existed, and why it took so long for Mom to walk out that door.

I suppose that photo might also explain why I was running towards that baseball field barefoot through the park across from our apartment complex with Dad in pursuit and knife in hand, and why I slammed the freezer door in his face and why he called me names after catching me in bed with Ed.

It’s also why he kept pursuing me even after I had doubled the distance between us and stopped around first base of the baseball diamond to catch my breath. Dad had slowed to a jog and then a walk. I waited until right before he hit the fence of the baseball field and then took off again, sprinting toward second and sliding into the imaginary bag like I was stealing a base, like I had done twenty-two times my sophomore year on that very field before dropping out to get a job because Mom’s hourly wage at the box store wasn’t really cutting it. Not when you added up all the gas and food and rent and credit card bills to pay off and the daily six-pack Dad was putting away even if it was the cheap Rocky Mountain piss water stuff. Mom never was able to get time off to make it to any of those games. She never got to see me sprint toward second as soon as the pitcher made his move towards home. She never saw me slide into the base in a cloud of dried dirt.

Dad just stood behind the foul line near first, arms on his waist, knife jetting out at an awkward angle from the back of his hand. He said come here and I said put down the knife. He shook his head took a few running steps and so I sprinted to third just like I had against West Valley on the last day of the season. Dad had seen that one. He’d wandered out from our darkened apartment building with a tallboy in a paper bag and his Los Angeles baseball hat pulled low. He’d walked across the field and took up a spot not in the stands with the rest of the cheering parents and teachers and friends but at the fence behind home plate where everyone could see him pulling sips from that paper bag. But no one was looking at him. They were looking at me running towards third. When the umpire had signaled safe that same crowd started hollering and cheering. Even Dad had yelled “that’s my son” in a kind of way that sounded both in disbelief and excitement. Then the crowd quieted to a hush, the pitcher tossed the ball and the batter struck out. The game was over. I never made it home.

This time was different. I was headed for home plate and right at Dad, knife still in hand, knees bent and crouching. A few feet away I lunged towards his legs and sent Dad tumbling over the top of me. Then I slapped the base and yelled safe but then Dad was scrambling for the knife, glistening in the afternoon sun on the edge of the infield grass. I dove for it but Dad got to the knife first and swung it in my direction, catching my forehead and slicing a three-inch line across it. When he saw what he’d done, Dad dropped the knife and we just stood there while I wiped the blood running down my forehead and into my eyes and across the dirt on my nose. Dad smiled. Then he turned and walked out of the baseball diamond and across the field towards the direction of our apartment. I waited until I could have reached out and squeezed Dad between my two fingers before I tossed the knife into centerfield.

Yeah I went back. There wasn’t anywhere else to be. Love is such a stupid thing.

Saxon Baird has written for Guernica, Slate, Vice Sports, Gothamist, Blunderbuss, Large Up and other places. He also works as a bartender.