The Dissonance in Terence Malick’s Knight of Cups 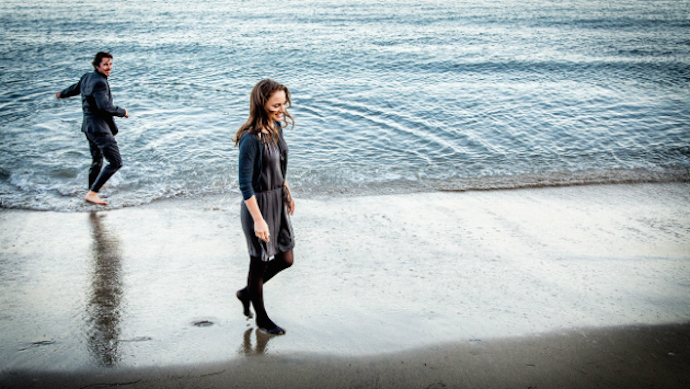 Knight of Cups, the seventh feature film from Terence Malick, opens with a quote from The Pilgrim’s Progress, the 17th century religious poem written by John Bunyan. The subsequent film is divided into chapters corresponding to different cards in the tarot deck: intertitles announce sections like “Judgement,” “The Tower,” and “The Hanged Man.” The underlying dissonance between these two framing devices—the Christian allegory and the occultist card deck—foregrounds something of the confusion of Knight of Cups: a gorgeous, intermittently moving sequence of images grasping for higher structure.

Knight of Cups is, indelibly, a Malick film: the film eschews an ordered plot, and characters don’t talk to one another so much as they speak in cryptic, overlapping voiceovers. The plot, such as it is, centers on Rick (Christian Bale), a Los Angeles screenwriter who wanders through life in a quest for some sort of inner peace. The tarot cards that mark off the film’s chapters each correspond to major figures in Rick’s life: his brother (Wes Bentley), his father (Brian Dennehy), and various lovers, most prominently Cate Blanchett and Natalie Portman. However, much like Malick films like The Tree of Life or The Thin Red Line, these characters are subsumed or integrated within a larger, visual and metaphoric structure, a dominant that dictates their roles and actions. In The Thin Red Line, this dominant was the circumstance of war; in The Tree of Life it was probably childhood, or maybe just the Universe itself, understood through a spiritual lens.

If there is a dominant in Knight of Cups, it is the city of Los Angeles. Knight of Cups stands as one of the most indelible cinematic renderings of my hometown I’ve ever seen: aided by three time Academy Award-winning cinematographer Emmanuel Lubezki (The Revenant, Gravity), Malick depicts Los Angeles as a landscape of well-kept swimming pools and monolithically blue afternoon skies, where blocks of light burn onto asphalt and impossibly beautiful people attend mansion parties and discuss significant drug experiences while overlooking the Pacific Ocean. Things operate in an oneiric register: Rick’s father washes his hands in a sink filled with blood, a woman dressed as Marie Antoinette wanders through a vacant, 1920s-style movie set. At every point, the line between what could be (weird) reality and what could be fantasy is obscured. As a film about Hollywood—purportedly based in part on Malick’s own experiences as a young screenwriter in the late 1970s—Knight of Cups follows films like Mulholland Drive in extending the fictive and illusionist aspects of Los Angeles’ most famous industry out into the city itself. One woman (Imogen Poots) tells Rick: “You don’t want love. You want a love experience,” but the film generally attempts to collapse this distinction between the authentic and the merely experiential. While not exactly path-breaking, this depiction of L.A. is never less than competently done, and oftentimes beautiful.

Unfortunately, the visual elements of the film aren’t enough to compensate for its weaknesses. The reduction of characters to archetypes isn’t necessarily a bad thing in a Malick film: in The Tree of Life, the Brad Pitt and Jessica Chastain characters were the personifications of paternal and maternal life forces, but this was effective because their place relative to the larger structure and themes of the film was very clearly telegraphed. Those characters had a place in Malick’s Cosmos, such that the juxtaposition of the creation of the Universe with a midcentury Texas family didn’t feel like a reach. Somehow, Malick’s (admittedly less ambitious) goal of tying his characters into his depiction of Los Angeles becomes muddled, and oftentimes the integration of different parts into the whole feels tenuous and incomplete. This can be blamed, in part, on the confusion of the different metaphoric structures Malick gives in the film: The Pilgrim’s Progress, the tarot, and the apocryphal Hymn of the Pearl are all invoked, albeit in fragments and without much in the way of clarification. This separates the basic, liminal elements of the plot—things like actors and scenes—from whatever larger themes Malick was hoping to convey.

The film, deprived of real metaphoric weight, comes off as a series of well shot romantic encounters between Bale and various, beautiful actresses. The basic chauvinism of this setup is amplified by how thinly many of these characters are written, how vaguely their relationship to Rick is defined, and their vocations as they are presented in the film: Freida Pinto plays a model, Teresa Palmer a stripper given to cheery musings on reality (i.e. “no one cares about reality anymore”). The male characters either abet this dynamic—Antonio Banderas cameos as a playboy, urging Rick to licentiousness—or stand exigent to it, like Bentley and Dennehy. The one exception is Blanchett: as Rick’s ex-wife, their relationship is clear, its parameters and failings are given more directly, and the whole is augmented by the intensity of Blanchett’s performance. She is the one female character who seems as if she could fully exist outside her relationship to the film’s protagonist.

It would a mistake to label Knight of Cups as simple auteurist indulgence: Malick’s recent films have all dealt in certain ways with elements of the director’s past. Certainly it would be out of order to criticize Malick for using his film to fictionalize his experience of losing a brother to suicide. These portions of Knight of Cups actually rank as some of the most effective and moving in the entire film, as Bale, Bentley, and Dennehy all ignite, mostly leaving behind the platitudes and existential koans of other parts of the film to reveal anger, regret and loss. It’s a shame this emotional directness doesn’t suffuse the whole film: while Knight of Cups is never egregiously bad, overall it represents a less satisfying cohesion of elements than in some of Malick’s other, better films.