“The Handgun’s In The Mail”: An Interview With Daniel Nester 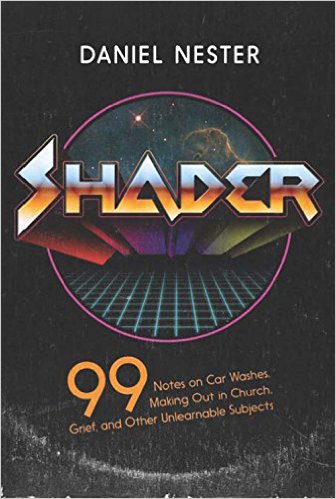 It’s not that New Jersey native Daniel Nester has never delved into his own past before.

He’s devoted two genre-defying books to his lifelong obsession with the band Queen, analyzed the Philadelphia dialect in The New York Times, and written about his life as a husband and professor in How to Be Inappropriate with equal parts poignancy and Nester-ian humor. (He describes his own brand of humor during high school as, “doing stupid shit, pulling hyperactive pranks,” but luckily for us all, his brand of humor has evolved while retaining that irreverent core.)

In his new memoir, Shader: 99 Notes on Car Washes, Grief, Making Out in Church, and Other Unlearnable Subjects, Nester takes that archeology to another level, conducting a decade’s worth of interviews with his mom and other family members. His need to understand his personal history, particularly his relationship with the enigmatic, erratic father who ultimately abandoned the family, takes him back through the record shops and Catholic schools of his childhood in Maple Shade, NJ.

Here, Nester weighs in on his drive to understand the past and his eternal identity as a Shader.

FANZINE: This book clearly had a long gestation period. At what point did you know that these various “notes” were becoming a single book as opposed to separate stand-alone essays, for instance, about your childhood and coming of age?

DANIEL NESTER: When my wife was pregnant with our first daughter, there was a sense of urgency to talk to my parents and ask them about my childhood, before I became a parent myself. Our oldest daughter was conceived through IVF, which was a long and strenuous process, especially for my wife. It worked, and there was this crazy nine-month period that I kept myself busy interviewing my mom, since I was anxious I might, you know, turn into my father. It makes no sense as I type this out to you, but I thought some genetic imprint would kick in once I got to be a dad, and I’d suddenly desert my kids like my dad eventually did with my sister and me. I compiled hours of recordings of my mom and me talking about growing up in Maple Shade, Catholic school, and whatever was going on with my dad. I regarded it as research, but I didn’t know why I was doing it for a very long time.

FZ: Some elements of your personal history that you share here are less than flattering. Is there any sense of catharsis in putting past misdeeds in writing and sending them out into the world? And how does it feel knowing that, as opposed to a confession booth where your indiscretions remain between you and your priest, these anecdotes are out there for friends, students, and your own kids to potentially read?

DN: More often than not, as I think about this book going out into the world, I think I come off easy. I did leave some things out of this coming of age story, and a lot of it would make me look like a total idiot. I didn’t so much intentionally leave these stories out as skipped over them to stay true to what I think is the story, which is how I figured out who I was.

When it comes to what is in the book, all of the less-than-flattering stuff you allude to had to be there: the drugs, bad sex, teenage longing, the clueless religious reverie, the trombone playing. They all play a role in the story.

A memoir-writing friend once said that the test of a memoir is writing it in the third person, and then going in with find-and-replace function and change it to the first person. I didn’t go that far, but pretty early on it felt like I was telling the story of another person, someone very close to me and someone I cared about, but who was nonetheless different, outside of myself.

I used to feel, more so than I do now, there’s a power to confession, the way cringe comedies nowadays revel over making people squirm. I don’t think that’s the real power of confession anymore. The real power is in the empathy between the story, the teller, and the audience. This is a relatively new realization for me, so I don’t have more to add. But I think it might be called wisdom.

FZ: Your father was, clearly, a compelling figure: he horrified you by taking you to see 2001: A Space Odyssey as a young child, suggested that you read weighty tomes like The History of Western Civilization and Pilgrim’s Progress before you entered 7th grade, and mailed you a handgun as a birthday present when you were in college. What sort of world do you think he was trying to prepare you for?

DN: The short answer: him leaving.

The long answer: I think he was trying to prepare me for the world he encountered, which was a world of joy and humor, sure, but also one that wears you down, uses you up, cheats you out of what is, a white Northern Eastern European male, rightfully yours. By the time he mailed me a gun, I had figured out this was mostly crazy talk, and I had to find another way to live my life. He was also my father. He loved me. I loved him. In a way, I had to get the love out of these gestures, such as they were, and let that stuff in. God I sound like I am in therapy. It’s a lot easier to tell the stories and let them do the work.

FZ: You pinpoint various identities that you took on throughout the years, and Shader ends with you immersing yourself in the marathon reading that takes place at St. Marks Poetry Project each New Year’s Day. However, your triumphant joining of this writerly tribe is undercut somewhat by another scene earlier in the book but later in your life when you’re filled with drunken rage at not having achieved more success as an author. How has your personal conception of what it means to be a writer morphed, if at all, throughout your adulthood thus far? 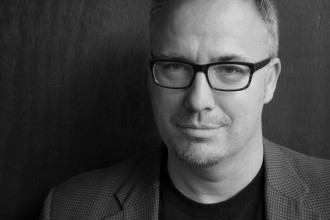 DN: How many hours do you have? Writerly pride is a fucked-up thing. I used to think I was only as good as my last review, my last book, last poem, last sentence. That still happens once in awhile, enough to creep in and mess up how I see myself and how I present myself to others. Alcohol, to be honest, plays a role, as well as a feeling of not fitting in with the way the literary world world. There’s also class: for example, there was a story on NPR that talked about how people who grow up to be writers and artists have had richer parents than people who work as nurses and doctors. I have found that largely to be true. So, yes, in my book, I find my tribe. But me and my tribe are still working things out.

Another reason I sequenced things I did is something I realized over the years. I don’t believe in memoir narrators vouchsafed wisdom from on high, triumphing over past ignorances. Life is messy. Memoirs should be much messier, and my sequencing the chapters that way, undercutting one supposed epiphany after the other, is my way of being honest about my story.

FZ: Are there any bits of Shader lore that you regret not being able to include in the book?

DN: There are stories that come back to me whenever I talk with someone else from Maple Shade. The guy who came to school and sang religious rock songs to us, and we giggled the whole time. A guy named Dwayne who rode his bicycle backwards, sitting on the handlebars. How we used to walk through the woods to heckle golfers at the Iron Rock Country Club. The fact that Underdog, a recurring character on Howard Stern, lives in Maple Shade. These are all what William Carlos Williams calls the “human particulars,” items that make us who we are.

FZ: The anecdote about Martin Luther King Jr.’s early encounter with discrimination in Maple Shade is woven throughout the book. At one point, you mention that your identification with his struggle was “the height of adolescent vaingloriousness,” yet it has clearly stuck with you. What essential truth about Maple Shade do you think is revealed in this tale?

DN: That we still haven’t dealt with the things that are original sins in this country, things like slavery, white supremacy, discrimination. When King was thrown out of that bar in Maple Shade, much of the town was still orchards. Apple trees. Peach trees. We basically threw a young King and his friends out of Eden. I wouldn’t say it’s been a curse on the town, but the fact that it’s never really dealt with it says something, if not about Maple Shade, then the country we live in.