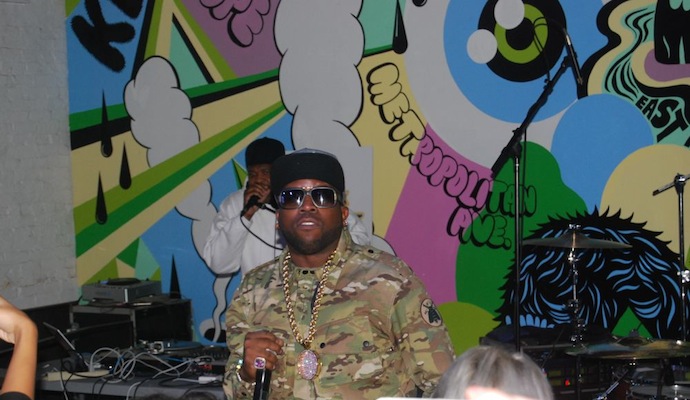 As his new album comes to a close, Big Boi’s words become indecipherable. His breathing is strained, as if he’s struggling to wake up, and then his crooning dissipates to a finger-picked guitar melody.  Compared to his 2010 solo debut, the Atlanta rap veteran is barely recognizable. Perhaps the biggest success of Sir Lucious Left Foot: The Son of Chico Dusty was that Big Boi created a pleasure cruise of everything within his already-large reach: Dungeon Family affiliates, rising Southern rappers and bizarrely joyous hooks (“Put Your Back Into It,” as in, “like your grandma do it”).

Near the start of his follow-up, Vicious Lies and Dangerous Rumors, Big Boi suggests to “Google Dungeon Family.” A honking, heavy-artillery banger, “In the A” brings out the best in hometown heroes T.I. and Ludacris. In “Thom Pettie,” cavernous belches cower to a thunderous Killer Mike as he rhymes “One time for my wife and mistress” with “SpottieOttieDopalicious.” Most of Big Boi’s new album, however, is influenced by collaborators based outside of Atlanta, if not rap entirely. In Vicious Lies, Big Boi acts as a transplant trying to find his footing within new territory––that is, becoming the George Clinton to his own Parliament-Funkadelic.

Vicious Lies‘ notes of Big Boi’s rap stature meet offhanded mentions of his family––once a source for self-referential comedic effect, now serving as motivation. Big Boi is not one to ramble even in raps, and so mentions of his grandparents and sons, Bamboo and Cross, feel most like checkpoints that he’s dashing through. As plainspoken as his best advice off Aquemini (“Let your paper stack, instead of going into overkill / Pay ya fuckin’ beeper bill, bitch”), Big Boi spells out how the absence of his father-turned-Vietnam War-casualty affected him: “I suffered tremendous damage, and it got me tougher than a mo-ther-fuc-ker.”

What could feel more jarring than his bloodline factoid is its surroundings. Unexpectedly, “Tremendous Damage” is reminiscent of B.o.B.’s smash, crossover hit “Airplanes.” Big Boi’s version of “Pumped Up Kicks”: the also catchy “Shoes for Running.” Vicious Lies also operates within what sounds like “Carribean Queen,” reimagined within the recycled air of a space craft. In songs like the glinting “CPU,” Phantogram’s Sarah Barthel sounds like Big Boi’s own Hal 9000. The Prince-inspired Little Dragon sounds equally comfortable in the dank “Tom Pettie” as they do in the album’s ambient conclusion “Descending.” It’s as if Big Boi’s entered the Hood Internet state of mind, in which mainstream Southern rap and web-savvy pop can peacefully coexist.

A few weeks ago, when Big Boi hosted a Vicious Lies listening party in Atlanta, one of his resident producers compared the album to OutKast’s Stankonia. Unlike such a rap classics, though, Big Boi sounds freer somehow to shift into different moods, if not deeper into his own consciousness. More than anything though, Vicious Lies is a start. As “Descending” drifts along, Big Boi’s voice creaks again, as if in pain, until eventually he lands on an explanation: “From the bottom of my chest to my stomach / goddammit, my daddy is gone.” For now, those words will do.

Vicious Lies and Dangerous Rumors is out today on Purple Ribbon Records and Def Jam Recordings. It is available for purchase from Apple iTunes.