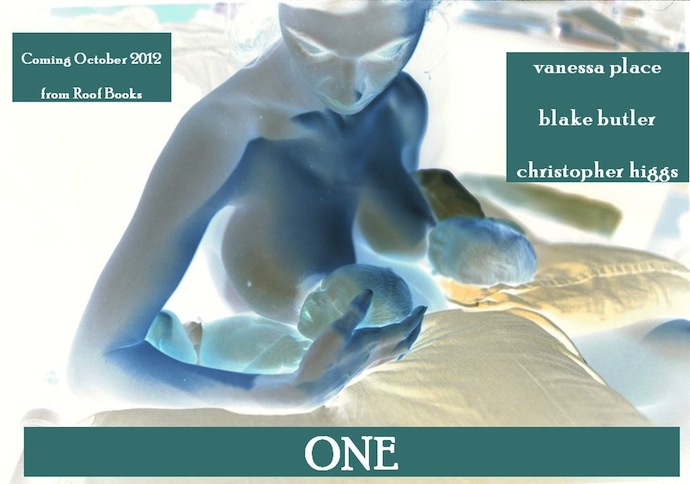 Interrogating the Real: A Review of One

A confession: I love books based around a concept or theme that can be read as indicators of process and exegesis. This is one such book. The telling epigraph, from none other than Gilles Deleuze, speaks of One’s “theme,” if you will, in a few brief sentences, including this one: “Meat is not dead flesh; it retains all the sufferings and assumes all the colors of living flesh.” One does, indeed, expound what it would be like to live as “meat,” as one who has been hooked in a particular manner into a way of speaking outside law, with a sense of pure jouissance that is not regulated. And yet there is so much more to it than simply that. First, a few words on the book’s programme.

The book began as a collaboration between two writers: Blake Butler, who wrote “a narrative composed entirely from the exterior landscape of a character,” and Vanessa Place, who wrote “a narrative composed entirely from the interior landscape of a character.” Christopher Higgs, who initiated the project, then assembled the narratives into a cohesive text, using montage to get the accurate angle on the character (or is there an angle?). Butler and Place were instructed to write in first person, present tense, 40-60 pages, and loosely based around the theme of Discovery – Secrecy – Escape. As Higgs writes in his foreword, the actual assembly was more difficult than he had thought, and the theme resembles that of “secrecy bleeding into escape and discovery bleeding into secrecy.” And as Higgs continues, this book takes place, for the most part, in “the house within the dream house, the helmet shackling us to memories of our father, we remember the evolution of law in order to help create stability as we continually struggle with our doppelgänger who too must necessarily be some embodiment or figment of multiplicity trapped between the material and the immaterial.”

This is as accurate a description as I can think of for this slippery slope of the law that this character (let’s call her “One,” shall we?) lives just beyond, or is it ahead of? The book is brilliantly laid out and organized in sections called “Utterances,” aptly named: “Utterance One: A dream house in a dream city, dreaming of the future and reversible destiny OR: Trial by Ordeal; Trial by Battle”; “Utterance Two: We are two of us, both one; bigger than a Screaming Machine, smaller than a hole. OR: Exit strategy.”; and “Utterance Three: The other body’s spine, a cage inside a cage OR: Ununderstanding.” As the text progresses, these three sections (as sections in a text this chimerical are wont to do) bleed into each other, blur boundaries, and yet still come to a resolution at the book’s end that leaves us readers wondering where we’ve been, and that bears careful re-reading.

The text itself is a mélange of sentences that I admit I tried to “place”—is this Butler or Place? I would ask, being familiar with both writers as single-text authors. Much of the interior discourse—Place’s writing here—is legal discourse, or rumination on the legal system that make the outward—sometimes violent, sometimes gruelingly sexual—language of the character One appear in relief, sort of: there is an uncanny juxtaposition (Higgs’s genius) of this sort:

Soon I am bleeding down both arms. Of greater significance to English law was the fact that clergy were banned from blessing trial by ordeal in the civil and common law courts. This had the effect of bringing the practice of trial by ordeal to an abrupt halt in England. Never again. Again. Mustn’t again, no more. Trial by battle, which later evolved into a method of settling scores by dueling, was less affected. Can conflict with virtues of privacy and confidentiality spread to soak? The blood pours on the carpet, spreads to soak it. Through the helmet I watch it make a map—a little trail leading from me to the front door to whatever shit aligns the lane. My front stoop made of blue bones. My grassyard high as me. Good, the blood a little conduit etching a way out of my house. (from “Utterance One”)

We have this blood-tinged language—the exterior, I assume, which is Butler’s writing—complemented by thoughts of law, what the character might be mentally thinking of, or at least escaping, as she is always on the exterior, the meat-type portion that can’t be made a subject of the law, at least not entirely. Despite the fact, too, that the narration seems to be oblique, occluded even, there is a sense in which the story takes shape, in the way that only something grotesquely fitting “the hole of the other” can. There is even, though, a sense in which the narrative’s own non-committal to traditional narrative provides a frame for an exit strategy, as found here:

Uncommit. What one would like to do mostly is spend a night in a museum. It’s been a dream since childhood, to spend a night in that house of dreams, that wishing-well that comes complete with café and gift shop. The gift shop being like those nuggets of dream-truths within dreams, letting one know what are those things within the dream-house worth attending to, that gilded spectre of one’s mother and not one’s mother that is one’s truest mother, being that ruby-red wish for alterity, as if. (from “Utterance Two”)

We hear about the mother’s body, where the story largely takes place, and we hear about the contingent nature of law—the slippery slope—that keeps the character, One, riveted to this emptiness. And yet, at the book’s end, we have a beautiful neologism: “Ununderstanding,” which unmakes any thought of placing One in a category, as Kant would have it. There is beautiful language here, as the character addresses her doppelgänger:

[I try to respond here but the seal is so much where my skin is making me boxed in and the slip of walls in room around us growing there where again I can see into the State-wide light, its color crushing up along the stemcage of our fortress at first in tendrils of the veins along a leaf, and gathering in fat around each, milk riding the line there spreading slick into long holes through which I can see the infestation my whole home has become, a pillar of fly salt rising up in column to support some lidless edgeless lordless ceiling underneath the x’d-out sky.] (from “Utterance Three”)

The plot, having been aptly thickened and also largely annulled by the projective nature of the book, ends with a twist, a searing image: “The screen behind me already darking nowhere underneath the mollusk sun.” We have, in the end, a sense that the narrative/montage is complete, that the sun itself—mother’s mollusk—has become shadow, has descended to drive, or at least to the ordinary world where neither Apollo nor Dionysius is ever entirely in control…. This text, and its assemblage, show the talents of Butler, Place, and Higgs not only as craftsmen but also as thinkers of landscapes, and the filmic quality of the book is one of its highlights.

If you find yourself drawn to purchase a copy, you will inhabit, at least for its 150 pages, the “slay of praise” that is both unique and expertly constructed.

One is available from Small Press Distribution and Amazon.