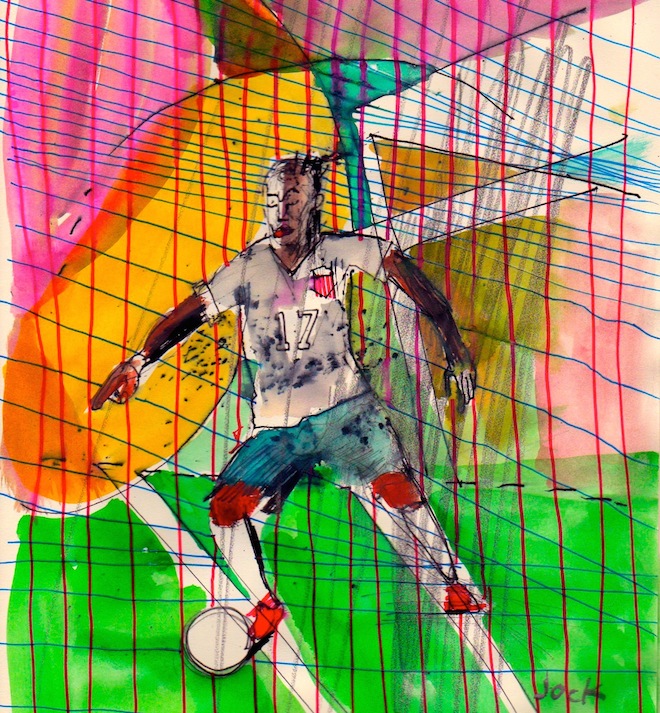 The 2014 World Cup kicks off Thursday in Brazil, and the question soccer-savvy Americans are asking is: how far can the U.S. men’s national team (USMNT) realistically go in the quadrennial tournament? Ominously, the U.S. team has an ‘every-other-cup’ performance pattern. That is, since 1990, the first of our current seven-straight appearances, the U.S. team has alternated a good showing with a bad one. (1990 marked the first time the USMNT had qualified for the World Cup since 1950).

In 1990, 1998 and 2006, the U.S. team bowed out after the group stage, sometimes embarrassingly so (in France 1998, the team lost all three games, even to soccer minnows Iran, while scoring just a single goal).  Conversely, in 1994, 2002, and 2010, the U.S. advanced to the knockout rounds, with the high-water mark coming in 2002, where they put in their best showing in this modern era with a shock win in the group stage over Portugal, a defeat of regional arch-rivals Mexico in the round of 16, and finally exiting the quarter finals after losing to Germany 1-0. The point being, that if this every-other pattern holds, the U.S. are due for a group-stage exit in Brazil.

Raising the degree of difficulty is the fact that the U.S. team drew into their toughest-ever group. It was inevitable, really, that the year when the U.S. have their strongest team ever, the soccer gods would conspire to put them in Group G, this year’s proverbial Group of Death, with perennial European powerhouses Germany and Portugal, and a strong Ghana team. Germany’s still-young team is four years wiser than 2010, when they rampaged through the group stage and early knockout rounds (including methodical demolitions of England 4-1, and Argentina 4-0), and settled for a third place finish. They will be hungry to improve on that showing and are currently ranked #2 in the world, according to FIFAs bizarre ratings system; generous, but even so, they are a legit top-5 side. Portugal is ranked 4th, and have the current best player on the planet in Cristiano Ronaldo, who not only can hold his own in a steamy Vogue cover shoot, but had a scorching season at La Liga’s Real Madrid, who won the Champions League. And finally, Ghana are far better than their #37 FIFA ranking, and hold a psychological edge against the U.S. in that they are the team that knocked the U.S. out of the last two cups. As for the U.S. team, they are no slouches either, weighing in at 13th in the world rankings.

So logically (Group of Death) and superstitiously (the alternating Cup-form pattern), the U.S. has a lot to overcome. My brain tells me the U.S. will bow out in the group stage, but my gut tells me something else. What that is, I’m still trying to sort out. Team coach Jurgen Klinsmann, the German legend, has shaken things up since taking over in 2011. His most controversial move came recently, when he named the final 23-man roster of players who will travel to Brazil, and he left off the team’s most identifiable player, Landon Donovan.

It seemed a sure bet that Donovan, despite his rocky relationship with coach Klinsmann, would make the team; on FIFAs website he is still listed, and featured in a video, as the U.S. team’s ‘player to watch.’ I doubt anyone who has followed the USMNT’s qualification path expected that Donovan would be a key component in Klinsmann’s starting XI, but it certainly was a shock to learn that he wouldn’t be on that plane to Brazil.

After all, Donovan is universally recognized as the greatest player in USMNT history, tallying 57 goals in 156 appearances. He was a driving force in the team’s surprise run through the 2002 tournament, and was named “Best Young Player.” He scored one of the most scintillating goals in U.S. World Cup history, against Algeria in 2010, when his 92nd minute tap-in secured advancement to the knock-out round. (ESPN commentator Ian Darke’s effusive call on that goal was, to my mind, one of the broadcasting highlights of the last World Cup). Donovan’s veteran’s savvy and big-moment mojo would surely be useful in Brazil.

From a P.R. standpoint ESPN—who will be spearheading the t.v. coverage here in the U.S.—must consider Donovan’s exclusion a disaster. A familiar face, and likable presence, Donovan has been the team’s talisman for the past three World Cups and simply, its most recognizable player. Surely, most, if not all, of the station’s World Cup spots must now be re-edited to erase Donovan’s undoubtedly ubiquitous presence.

Enough about who is not going: what about the team that is going? I mean, to paraphrase that wise warrior-poet, Donald Rumsfeld, you go to the World Cup with the team you have, not the team you wish to have, right? There is a decidedly northern-European identity to the team we have, and not only coach Klinsmann. There is one player each born in Iceland and Norway, and five, count ‘em, five German Americans. Icelandic-born forward Aron Johannsson (who will likely come off the bench late in games to add pace and give a tiring Jozy Altidore a rest) and Norweigan-born midfielder Mix Diskerud (surely one of the coolest names in the World Cup) each add an international flare to the team.

As for the German-Americans, there are five players who have one German and one American parent, and therefore had the possibility of playing for Germany. This contingent includes starters Fabian Johnson, a midfielder,  and defender Jermaine Jones; two others who might log some minutes are defenders Timmy Chandler and John Brooks.

The German-American getting the most ink, however, is 19-year-old forward Julian Green. His is the classic story of an American-serviceman father and a German mother. Conspiracy theories abound as to why Klinsmann would include such a ‘green’ player; he had only played with the U.S. team twice before Klinsmann included him in the 23-man roster. Some think Klinsmann had to promise Green a place on the Brazil-bound roster (thus knocking out Donovan) so that he wouldn’t play for Germany, who were definitely interested, and for whom he had played on some of the youth national teams. Regardless, Green might not even see any game minutes, let alone start, and some feel that Klinsmann is thinking ahead to 2018, in exposing Green to the 2014 World Cup experience.

The biggest worry is starting striker Jozy Altidore. Big and strong and difficult to knock of the ball, Altidore was coming off an impressive two seasons in the Dutch league, where he scored 39 goals in 67 appearances for his team AZ Alkmaar. Last fall, he was looking forward to a season with Sunderland, in England’s Premier League. He was similarly cutting a torrid path through U.S. qualifying matches, seemingly scoring every game. His Sunderland campaign was shambolic; he scored only twice, and later in the year was dropped from the first team. Altidore’s two goals in the U.S.’s final tune-up match against Nigeria might boost his, and U.S. fans’, confidence a bit, but ESPN made much of the fact that the Nigeria tallies were his first for country OR club since December. Not the sort of inspiring form you want in your #1 striker on the cusp of the U.S.’s most competitive group games ever.

The U.S. team’s three most important players are veteran goalkeeper Tim Howard, tireless midfielder Michael Bradley, and team captain Clint Dempsey. Howard had a phenomenal season in goal for his English club Everton and, in Donovan’s absence, seems to have become the de facto face of the team. Michael Bradley was an integral part of the team’s run through South Africa 2010, and until recently, played for Italy’s Roma. He has since returned to MLS and plays for Toronto FC. Flinty veteran forward Dempsey is the U.S. team’s most accomplished club-player. For five seasons, Dempsey plied his trade—timely goals mostly from within the six-yard box—for England’s Fulham. After a disappointing stint at Tottenham, where he struggled for playing time, he returned to the MLS, where he now plays for the Seattle Sounders.

We don’t have the space here to talk in depth about the U.S.’s competition, but I feel I should at least include a few paragraphs about some of the 31 other teams, especially about who has a chance to win. Brazil are the betting favorites, in equal measure for their quality and for their home field advantage, something that should never be dismissed lightly. (France and England’s lone World Cup triumphs occurred on home soil). Brazil, here, are blessed with a relatively easy Group A (Croatia, Mexico,  Cameroon); but assuming they win their group, they face a potential tough round of 16 opponent in Group B’s second place team, who will be one of either Spain, Chile, Netherlands, or Australia. Spain should win that group, so second place will most likely fall to either Chile or 2010 runners-up Netherlands.

A European team has never won a South American-hosted World Cup; so, then where does that leave Spain, the current #1 ranked team in the world and the defending champions? Their tough group might take something out of them, so I’m not liking then to reach even the semi-finals. I have them losing in the quarterfinals to Colombia. And what of Germany, the #2 team in the world, and prohibitive favorites to win the U.S.’s Group G? If they can manage to win Group G as expected, then they appear to have an easy path to the semi-finals, where I have them facing Brazil. Brazil advances.

My other pick to make the final is Argentina, who are blessed with possibly the weakest group in Bosnia-Herzegovina, Iran, and Nigeria. Argentina has a lethal attack, possibly the best strike force in this World Cup, in Lionel Messi, Sergio Aguero, Gonzalo Higuain, and Angel di Maria. Plus, they would love nothing more than to win their first World Cup since the Maradona glory years of the 1980s, and on arch-rival Brazilian soil to boot. I have them in the finals against Brazil, because I really want to see that matchup. Sorry, Brazil, I have Argentina winning it all. Brazilian heartbreak ensues.

And, finally, to answer the question asked in the first paragraph: what about the U.S.? Their first match is against Ghana, a game they must win. If they lose against Ghana, they have virtually no chance to advance, because they would have to then come up with at least a win and a draw against Portugal and Germany. So if U.S. beats Ghana, and then somehow can draw with Germany and/or Portugal, they will likely advance. It’s a long shot for sure, but the U.S. is still under-respected around the world, so maybe they can use that dissed-underdog mentality to motivate them. They have no chance to win it all, of course, but it’s always more fun when the U.S. advances. Regardless of the U.S. team’s progress, I can’t wait for Thursday.