My Own Saint: A Review of Letters of James Agee to Father Flye 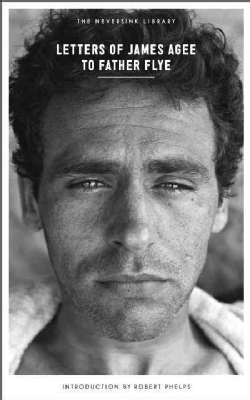 “The world (and myself) seem to me this morning, in light of recent context, evil, exhausting and hopeless, not to mention nauseating and infuriating and incurable, yet I am thoroughly glad I am in it and alive.” This—written by James Agee in a letter to his longtime friend and confidant the Episcopal Father James Harold Flye on November 26, 1937—is one of two prayers I recite every morning before starting to work. (The other is from Italo Calvino: “Seek and learn to recognize who and what, in the midst of the inferno, are not inferno, then make them endure, give them space.”)

Once, long ago, Agee emerged in my imagination as a literary saint of rather catholic imperfection, who could render into words the impossibility of life, who himself embodied in his own raw childlike tenderness a daring to the world: take me, I don’t care, eat me alive, but listen first, listen long enough to hear. He is 28 when he writes that letter to Father Flye, originally his history teacher at St. Andrew’s boarding school in the Tennessee Appalachians, as he is trying to emotionally and intellectually digest the eight weeks he’d spent in 1936, along with the photographer Walker Evans, observing the lives of three Alabama sharecropper families. His editors at Fortune have rejected the 30,000-word essay he delivered. Could it make instead a book? He dreams it, yet he can’t trust the dream. He’d have to quit Fortune, otherwise would he ever have time to write? He’d have to get out of New York.

A marriage is dissolving as another ill fated one is beginning. Agee goes to live on a farm in Frenchtown, New Jersey, on the Delaware River. There, he conjures Let Us Now Praise Famous Men, narrative non-fiction as science and song, a breakthrough in form, in the ecstatic voice. Consider his panorama of one of the families, the Ricketts, asleep:

“The bare dirt is more damp in the tempering shade; and damp, tender with rottenness, the ragged wood of the porch, that is so heavily littered with lard buckets, scraps of iron, bent wire, torn rope, old odors, those no longer useful things which on a farm are never thrown away. The trees: draft on their stalks their clouds of heavy season; the barn: shines on the perfect air; in the bare yard a twelve-foot flowering bush: in a shroud of blown bloom slumbers, and within: naked, naked side by side those brothers and sisters, those most beautiful children; and the crazy, clownish, foxy father, and the mother; and the two old daughters; crammed on their stinking beds, are resting the night…”

As he’s writing this, in 1938, Agee composes another letter to Father Flye from Frenchtown, “I feel more shaken, confused, and ignorant, through my own actions, than I can remember having felt before…I cannot know for sure what I am doing, or why, or at all surely the difference between right and wrong…” Agee’s confusion is mine; it’s yours too, I think. Or rather, I think it ought to be. The most searching writing, even as it demands of us precision and particularity, derives its power from confusion, the willingness to be confused. This is Agee’s medium in the letters to Father Flye, which were collected and published originally in 1962, seven years after the author’s death. Now Melville House is reissuing the book, Letters of James Agee to Father Flye, complete with the original, moving biographical sketch by Robert Phelps, a cofounder of Grove Press.

Here in these letters Agee is skinned, here he is bruised, here he is fresh, romantic, frustrated, idealistic, thoughtful, perceptive, fatalistic, honest, loyal, shameful, rational, destructive, skeptical, and honest. He’s wanting, grasping, rationalizing, grieving, pitying, singing, in love with the nature of things, and always, it seems, spent for time and focus and money. The letters begin in 1925, when Agee is 16, rejecting insincerity, and attending Exeter and continue rather steadily as he moves on to Harvard and then to New York to become a writer. Of this possibility, he writes to Father Flye from Cambridge in 1930, “I’d do anything on earth to become a really great writer…devise a poetic diction that will cover the whole range of events as perfectly and evenly as skin covers every organ…”

Despair comes naturally next, as night follows day, and just as relentlessly, to every writer of such erupting ambition. In Agee’s first letter from New York he mentions suicide; his own mortality patters the pages of the next 23 years’ of letters, stippling ink that grows, by the mid-1940s into a puddle: Agee is killing himself with alcohol and cigarettes.

After quitting Fortune, he moves on to write movie and book reviews at Time and then The Nation. Houghton Mifflin publishes Let Us Now Praise Famous Men, including Evans’ photographs, in 1941. Only 600 copies sell. He begins work on a novel—The Morning Watch, published in 1951—about St. Andrew’s, but finds himself “half-drowned in inertia.” He wants to write films, have a newspaper column, and post-War, resolve for himself, and in literature, what it means to live in the atomic age. In the letters, he argues for civil rights and socialism, both in apparent disagreement with Flye (the collection only gives a taste of Flye’s side of the correspondence). But Agee is sensitive to complexity (more so as he gets older) and though sometimes angry or frustrated, is never strident. Agee breathes in compromise. “My conception of socialism,” he writes, “is of something in which absolute victory is unthinkable; what one works for is the least disastrous and most honorable defeat available against all odds.”

This becomes his working ideology, a mantra for life. In 1951, while in Los Angeles to write the script for John Huston’s film “The African Queen,” Agee has a heart attack; from his hospital room, he writes, “Just the things you say of it—the possible difference between 40 more years to live, and 5, and that this in every visible controllable way, anyhow, is up to me. I wish I could take it a good deal more seriously, though.” Here, the letters evoke for us a tragedy in motion, for we know he is only imagining an “honorable defeat”—in which he doesn’t have to sacrifice the dignity of life for asceticism. Against all odds, he won’t give up living in order merely to live. Phelps, in the book’s forward, says that Agee had “the gift of being able to give oneself freely…He was interested, always, and unlike most gifted men, not prudent, nor selective, nor limited.”

Agee doesn’t make it five years; when he dies, in 1955, at 45, in a taxi on the way to see his doctor, it has come too soon, and God knows it was preventable. Always stressed for time and money, he never gave his own work enough attention. He spent too long writing unsigned reports for Fortune and Time when he might have been pushing out more fiction (A Death in the Family, for which he posthumously won the Pulitzer Prize for fiction, was published in 1957). The conventional take on this is that it is a tragedy. But it isn’t truly so; this book of letters—for all it gives us of Agee, the man—is one reason why. The honesty is worth double the output. The letters themselves also remind us of his extraordinary range, tenacity, and prodigiousness.

In Huston, Charlie Chaplin, and Walker Evans, he worked with and came to admire some of the 20th century’s most extraordinary figures. Far from slender, Agee’s two plus decades of serious work rendered us two volumes of film writing, scripts for Hollywood classics, the two novels, and in Let Us Now Praise Famous Men (and the originally non-published Fortune essay, Cotton Tenants: Three Families, which Melville House put out last year), a delicate, sensitive prose—doused in sun and permeated with night—that assuredly fills out his youthful vision for “a poetic diction that will cover the whole range of events as perfectly and evenly as skin covers every organ.”