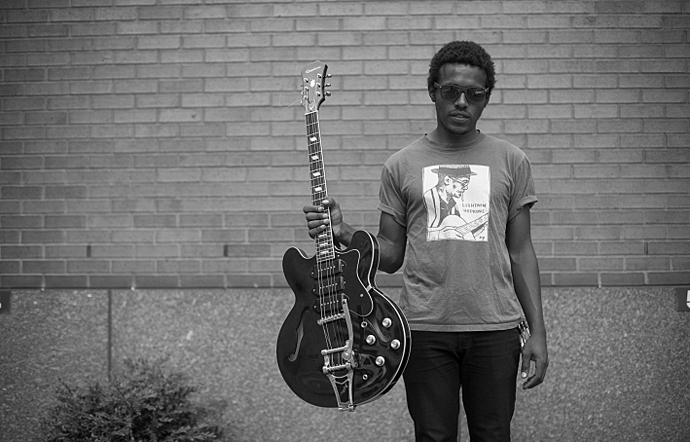 I get sick of my music collection sometimes. It exhausts me. Everything I own feels boring, laughable, heartless. I throw away entire records when I’m surly. I type ridiculous, desperate words into the internet–things like “50 best records of 2014,” and I listen to everything on the lists, I say I’m stumbling around for fresh air. A lot of records in 2014 were sleek, button-pushing, genius; a few were horrible, a few ghosts came back. But nothing cleared the room like Benjamin Booker‘s self-titled debut, the only record I heard that convinced me a complete original had arrived.

Booker plays the opening riff to “Violent Shiver” with a sloppy assuredness that’s the perfect blend of fuck-all punk and fuck-life blues. Throughout the record this fever pitch doesn’t drop, not in the fast ones, not in the slow ones, not in the delivery, lyrics, instrumentation, not in the recording. When I hear a record like this, I do what I always do, I put on a clean shirt and I track down the artist, I ask if I can ask him six questions. —Danniel Schoonebeek

Danniel Schoonebeek: When I started listening to your record a few months ago, I was surprised at how immediately I could hear the influence of punk and hardcore in your songs. Double-time beats, lo-fi breakdowns, your vocal attack, even the fact that you’re a three-piece. Can you talk a bit about punk and hardcore and how you came to play the music you’re playing now?

Benjamin Booker: When I was a kid I used to go to the Skatepark of Tampa with friends to skate occasionally. I was never really good. Another kid who I went to high school with played in a d-beat band and invited me to his show at the venue connected to the skatepark called Transitions Art Gallery at the time (now it’s Epic Problem). I saw them and another hardcore band with kids I grew up with called badeatinghabits play (some of the members are now in a Boston band called Ukiah Drag). I was blown away. At the time I had never seen kids my age writing their own music and playing. I kept going back as often as I could and got turned on to a bunch of bands, mostly stuff from the south like This Bike Is A Pipe Bomb, Torche, Municipal Waste. It’s also how I got connected to 80s hardcore. The first vinyl I bought was Germicide, a live record from the Germs. When I started writing I guess it just made sense those years at the skatepark would come through.

BB: I’m a massive, almost obsessive, fan of James Baldwin. I’ve never connected with a writer more and I think reading books like Go Tell it on the Mountain, Giovanni’s Room, Another Country, or The Fire Next Time helped me to be a more honest writer and showed me how to begin to discuss some areas of my life I didn’t know how to talk about.

I’m also really into comedy and listen to a bunch of comedy podcasts. I like the comedian’s approach to writing and building new material. Failure is something you have to learn to accept as a comedian. When you’re working on new material you just have to get up and try things out and not be afraid of a bad response. I guess comedians give me courage to take more risks on stage.

DS: I’ve noticed this emotion in music that’s hard to pin down, and I’ve been searching for a term for it for a long time. You see it in songs like “I Don’t Know What You Got” by Little Richard, or “Rudie Can’t Fail” by The Clash. The band’s performing this raucous song, but the song is about real misery. The band almost parties through its misery. You see this in some of your songs too, like “Violent Shiver,” “Always Waiting,” “Old Hearts.” What would you call that emotion? And why is it so hard to pin down?

BB: I remember hearing some old bluesman talk about how the blues isn’t about wallowing in misery. It’s about taking something negative and turning it into something positive. They’re sweating out the evil on stage. I liked that idea and even though the subject matter of some of my songs comes from a bad place I wanted to make something positive of that—imagine what it’s like to see people dancing to you singing about some of the worst moments of your life? It weirdly makes me feel better.

DS: There’s a fascinating interplay between the lyrics you write, the music you play, and your age. They feel incongruous in a good way. Your lyrics address police violence, parenting at a young age, civil rights, the over-saturation of our gadgets. One of your most poignant lyric for me is from “Violent Shiver”: “If I go down with a gun to my head / just remember what I said.” What’s your sense of the political climate in this country right now, and how do you attack that as a writer?

BB: I try not to write about politics. There are people who are far more informed than me who can do that. I do write about the people around me and how certain things affect me and make me feel. “Kids” is about growing up in post-9/11 America and the fear that’s been looming over me for years. There was such a quick shift in my life from that point on, but I wasn’t looking to be preachy, I just wanted to capture the anger and disappointment I felt and how it still affects me.

DS: I played drums in a hardcore band when I was 18 or so, and when we found out we were playing CBGB’s, there was this feeling like we’d made it, but then the show ended up being one of the most dispiriting experiences of our lives. The whole sheen wore off. You just played New York in April, is it a city you like visiting? What are some of the towns you’ve loved and ones that still freak you out a little?

BB: I love New York but it is really the only city that makes me anxious. I think it’s because there are so many people I know in one place and it’s always a little stressful trying to see everyone. It also usually means a ton of press and a bunch of industry folks at shows which is always a bummer, but necessary.

Birmingham in England is really one of the only cities that freaks me out a bit. It’s a pretty grim place, but the fans were nice.

DS: It’s been said that some bands, and some writers, just write the same song over and over again their whole careers, and that totally works for them. And then some bands and writers innovate every time they release. I’m sure people are already badgering you about the next record. Do you feel any pressure to innovate? Or do you think it’s inevitable you’ll just make the music you write?

BB: I don’t feel any outside pressure to be innovative. I do hope to always make music that represents me and if that’s my goal it’s always going to sound like something different because I’m the only me—unless I have a twin my parents didn’t tell me about.