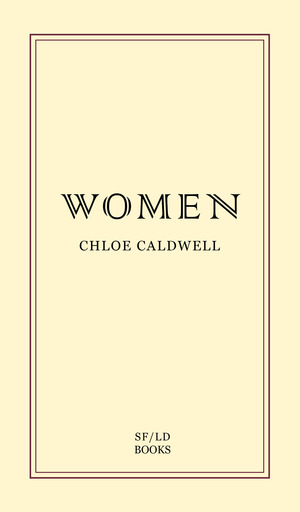 Do you remember those heady teenage nights when there was a total lack of interest in your own mortality? When there was only malt liquor and music on the radio and the smell of clove cigarettes and the feel of other bodies and the musty smell of a back seat?

In her intimate new novella, Women, Chloe Caldwell explores the grown-up version of this carpe diem mindset with an unnamed female protagonist whose need for emotional and physical connection eclipses her sobriety, personal safety, and mental stability.

Women, like Caldwell’s first book, Legs Get Led Astray, is positively feral and coyly voyeuristic, inviting questions as to whether the memoir is autobiographical or not. Midway through it, Caldwell interrupts the narrative to share her editor’s writing advice to the former memoirist: “He tells me that to write fiction, I should just make the situation go the way I want it to go….But it didn’t make sense this way.” Along with unpretentious prose that’s stripped of adverbs and metaphors but jacked up with dark humor, it’s the “is this or isn’t this” question that makes Caldwell’s work so readable.

At its core, Women is a break-up story for the over twenty-five set. A listless, self-destructive young woman moves across the country to put distance between a growing reliance on opiates that she nurtured back home along with a chemistry-free romance with a man who should have stayed a friend. But shortly after her arrival in a new city, our New York transplant replaces pain pills with a human drug in the form of a much older lesbian named Finn. Proud of her adherence to the “sweet-spot” (“Butch, but soft. Right in between a male and a female.”), Finn is a technical service librarian to the protagonist’s library page, an erudite, imposing force who begins her illicit seduction of the narrator by sharing her desire to see the struggling writer “read on a barstool under dim lights for her while she sipped on a beer.”

The fact that the relationship is doomed is clear to everyone in the novella, including the narrator, even before she realizes that she could be sexually attracted to a woman for the age-old reason that Finn is in a long-term relationship with someone else. This doesn’t stop the two from carrying on a platonic relationship in bars and pizza shops that turns sexual as soon as the two are underground in the protagonist’s basement apartment that they call “The Aquarium.”

Women contains enough hydro-saturated, of-the-moment fodder to turn the old guard away sneering: text message transcripts, AcroYoga, literary tattoos—an opening paragraph that contains language such as “hooking me up with” and “stoked.” But what radiates from Caldwell’s prose is her absolute lack of apology for who she is, the world in which she lives, and the fact that Chloe Caldwell very well might be Chloe Caldwell’s favorite subject.

Anyone who has suffered through apologetic fictionalized memoirs where the narrator spends every other page reminding you that she is 1) ashamed 2) confused 3) conflicted about the things that she is sharing with the reader will race through this nimble novella like a child gunning for the stairs.

As a woman in her mid-thirties who spends a significant amount of mental energy paying attention to what she’s eating, how she’s sleeping, and to the politics of her wallet, without meaning any disrespect to the travails that push people into emotional whirlpools, it can be deliciously decadent to read about someone who eschews any self control. Take, for example, a mere eight-hour period of our narrator’s life recounted near the end of the book when she is still dating Finn but developing a sexualized friendship with a nomad webcam girl named Sabine who flies in once a season to clean the protagonist’s bathroom and make her hard boiled eggs. After a night out spent rolling on MDMA at a literary reading (that’s right, at a reading), in a text message exchange with the hyper-sensual Sabine, the narrator admits that she’s still feeling social and Sabine invites her over to do some morning AcroYoga. You know, as one does.

Although she’s hovering somewhere near her thirties, Caldwell’s narrator perpetuates a certain Peter Panhood of existence with her desire to feel everything to its fullest, while staunchly initiating, then sabotaging, her own attempts at self betterment. She dines on 99 cent chicken strips and pizza, she qualifies for food stamps—she needs food stamps—but she’s too lazy to re-apply when she’s notified that she missed one of the questions. She takes home with her one night, in the guise of “dinner,” a single Hershey’s Bar and a box of red wine. She embarks on an online dating spree that sees her sharing pints with one lackluster Finn placebo after the next, with one candidate beginning their date by telling her, “Today my friend told me that she and none of our friends enjoy my company.” She binge eats vitamins and chases them with beer. In pursuit of mental stability, she calls a therapist and hangs up when the woman says her fee is one hundred dollars an hour.

She develops a case of mild agoraphobia. “I attempt to make soup, stir-fry, to use up every single ingredient in the house, so I don’t have to go to the grocery store. This is challenging as I cannot cook, have not cooked anything the entire year. I decline all invitations. I sleep.” In the age of book gurus and conscious uncouplings and luxury mayonnaise, you have to love a sluggish protagonist who self-soothes by eating her weight in mac and cheese while loop watching Mermaids.

Towards the end of the book, the heartsick protagonist admits that one of the things that drew her most to Finn was that “she mirrored me. She listened.” And of course, by reading Women, we’re listening, also, becoming the fleet of women and non-women whose attention our narrator craves as her affair unravels.

Regardless of the fact that the book centers on a same-sex love affair, the inevitable heartbreak that the narrator experiences is universal, and the way in which she comes to these experiences is relatively mundane. But it is in fact in normalcy that Caldwell’s writing thrives. Instead of deriding it, escaping it, or trying to make it more beautiful through literary tropes, Caldwell beautifies her narrator’s life by showing it exactly as it is, with our heroine gamely clocking in to her temporary library job in her temporary city, living paycheck to paycheck in order to touch and be touched by her temporary lover, all the while knowing that this person is ultimately going to fulfill the narrator’s perverse wish to be rudderless, heartsick, and perpetually disappointed.

Women can’t be considered a coming-of-age tale because no new age is reached. In the middle of the book, while the narrator reflects on the fact that she allowed herself to be pursued by an unavailable woman who could never freely love her, she says, “I don’t, of course. Of course I don’t change my life.” The doomed lovers continue to share a late-night bed, Facebook posts are blocked, text messages turn jealous. While each person waits for the other to make the next I-miss-you move, the silence lengthens, and the affair comes to an end.

The women in Caldwell’s novella might be a little too self-absorbed and destructive for some reader’s tastes, but this reader isn’t one of them. Joyful, honest, and perfectly unkempt, Women is a taut yet expansive story about falling in—and then trying to crawl back out of—the damp cavern that is love.