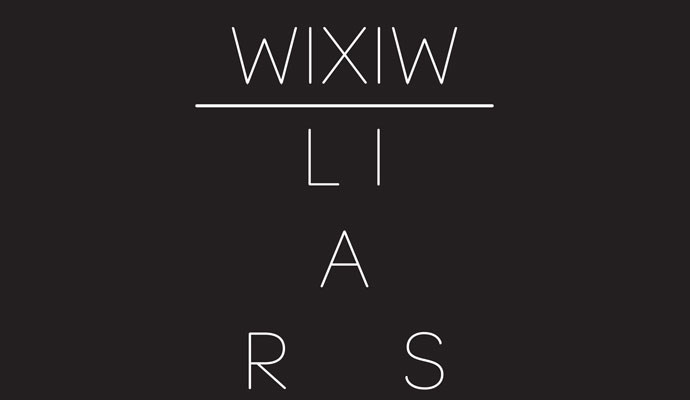 I don’t think I understand music anymore. Maybe I am older now. I like the feeling of moving across an enormous field of ice the synth sits into. Earlier today I thought, “If you can press buttons and sing now, you can be a musician,” and this seems true of these sounds, though maybe this was always true. How many ways are there to press a button and what all else has buttons in it. My coffee table is black and supports my feet as I sit on the black sofa with the machine and the black headphones plugged into the machine so I can hear the sound. I don’t know how many albums have passed between the album Drums Not Dead by Liars, which holds hard a particular frame of hours passed against my skin in a way I can still stand to touch with my head now. So much music I have passed against for how it turns on things I do not want. Feeling of blue cake icing being spread over the ice fields now as the song fades and in the room as I can hear the room again around me a machine with motors roaring passes overhead.

Liars are good at creating trouble holes in sound while maintaining the glass around the air forming a bulb that spreads like a bubble being pulled through air, I think. I remember doing that with my sister and my dad in the hard plugged up beat underneath the beginning of this thing they’ve named “Octagon.” I don’t have a memory of my mother during those moments standing on the grass there that my father kept so healthy and now in his aging is a wholly other color. My first dog is still buried underneath there somewhere in a ceramic container that was shaped like a human organ though probably has been broken apart under the soil pressure. Some of the noises sound like falling through pyramids and I like that. I like that there are different kinds of men’s voices in the music allowing the bodies to pass around you and redirect your vocal passage. I am thinking more of triangles here than the namesake, which is nice to think about how a triangle may fit into the octagon in so many different ways. I have always wished so badly I could play the drums and have hardly even tried because I can’t hear them in my blood.

Each of the snare hits guiding through here, sound like little bursting packets of glass that then recombine themselves and burst again in the time specified by the men in the room that recorded all the rest. Had a weird vision of the black hair on the arms of the particular lower voice of the multiple-seeming men singing here, and then the way the hair goes down into the skin and how beneath that to us outside it now is unlighted. Liars seem able to manipulate light in their organism. Felt just now that the wall ~4 feet from my left shoulder had begun to lean toward me from the top part where it touches the roof but was afraid to look. The walls in the room where I sleep are a pale powder blue that my sister mostly painted. She has only been to my house once or maybe twice. I can’t imagine her hearing this song anywhere else for some reason. I can’t imagine anybody. I still think about my friend Mark Leidner saying how he can’t imagine anyone but him listening to rap music, and then another time saying that doing anything is automatically embarrassing. I changed those words the way he put them into my own words sort of, though they seem important to what I like about this kind of music.

Image of a dark room full of people dancing without touching in oddly orchestrated ways to barely miss the place where other limbs have just left the air as they move into the space all thinking they are the only ones in the room. Light is a kind of ring, right? I wish video games worked like this music does, constantly flooding past the point of seeing just as you see it, textures deeper than the screen is. Or maybe it’s the other way around: I wish music could be like video games, ones without end and without controllers and without characters and without plot but with color and motion and space and locations no one before the time the game was produced onto our air were ever touched, defined by code and possibly always changing in ways we could not find unless we pressed the nonexistent buttons that would lead us there into it.

One thing I like about playing cards is how the cards at some point assumedly touch all the hands of all the people at the table, snaking between them in the confines of the game. Though conceivably in every game one could be dealt the exact same hand again and again and you would never touch the other cards the way probability says you eventually should. How in probability part of its conception is that the improbable happens. That principle feels at the center of Liars music: something vibrating in how it holds together, crystalline surfaces painted over beyond sun.

I think I read something about how the title of this album was a mysterious construction even to the band, that WIXIW had no particular definition, but many definitions, many possible ideas crammed into the space symbols forced together uniquely contain: layers to an invisible mall of ideas divided interiorly by panes of glass and other walls, and between them the passage of the skin and air and tones and whatever else makes time pass. Just got the sense of the music coming into my body in a way that I am a factory that sucks something from the sound or otherwise also passes something back into the sound and holds it, rubs against it, until perhaps the sound in passage comes back out, through the holes in me or in what I eject as speech or skin flakes or a way of looking at a wall or a person in a room a wall holds, the sound now knitted there into a new location. A function of time but also the specific objects we create to go around with and to spend our time purposefully in pursuit of, mutation of the edge. I like the idea that any record put up to the ear is like opening a hole into the room where the bodies who made the music were and are now waiting with the drums and the machines and their blood and what had made them as people come to where they were. Not all music creates this feeling, so little does really. But Liars does. They bend a kind of time, splinter other instants in between instants that had not been before there were. Or otherwise perhaps distract me easily from dying or whatever else must come.

7. “His And Mine Sensations”

Image of all the waterfalls of earth pouring into the same single mouth of water rushed and wrapped against each other, endlessly. Water from where. The silver strings of guitars that from certain angles under certain light would show the light back at itself, and split it into fifty splaying. A room in a film without doors or windows in which a band plays for themselves alone locked in, held in the background of that film forever copied, repeated through the world. The guys in Liars eating hamburgers in a bar in a club where they will play these songs on any given night a different way than how they sound here with me in my home surrounded and feeling for the first time today so late at night already loose and opened by the sound. On my hand, a word I wrote sometime last night half awake ruptured from sleeping now faded so faintly I can’t make out what word it was or has become. What I would have done if I could read that word, probably nothing, but still.

Stairwells in the same image of the waterfalls, though instead of all beginning extant and coming together in one location neverending, here continuing curled through the focal point and spreading out again underneath that, to finite but countless copies of the world. Dust in all those rooms. Glasses in all those rooms against the lips. The headphones seem somehow sucking down against my head as if becoming affixed. The grass of my childhood home replaced with boiling fat. The sun whiter than the color of this file. I want to go rolling facefirst into it and feel it try to stick.

You don’t have to look at the websites you look at any day. You don’t have to move. You can. I wish I could eat bass with my mouth like I eat candy. The clicking in this song like thousands of little locks being popped open and no one going in or coming out, not right now. All the people with their fingers full of future touch. Some music makes you feel like you won’t ever get any older, even as you move, and every day that way seems rarer, choked to death by what is actually done. Holy rest.

There is an ad on the browser behind the document where I am typing this with an image of a black bear pointing at me directly. He seems to have human eyes, though one of the eyes is covered over by where I’m typing, so the eye could be another ad. Could be a pig or a word or a hole through which someone is looking through the screen, waiting for this album to end and for me to stop typing and close this document so it can see. So if the album could go on forever…

By near the end now of the album I feel like I don’t want to say anything else. I want to lay back and listen to the last, short song and let it come into my head through the wires we require. And yet I keep sitting up on the edge of my sofa, as I realize I have been this whole time, perched, like waiting for someone or thing to come in through the door and pull me up. When the song ends now, I also now remember to recall, the room will be silent and I will hear again what’s beyond the house, even if that’s also silence, or what the silence hides, though as well I can already feel the color of these songs all through my hands and up my arms.