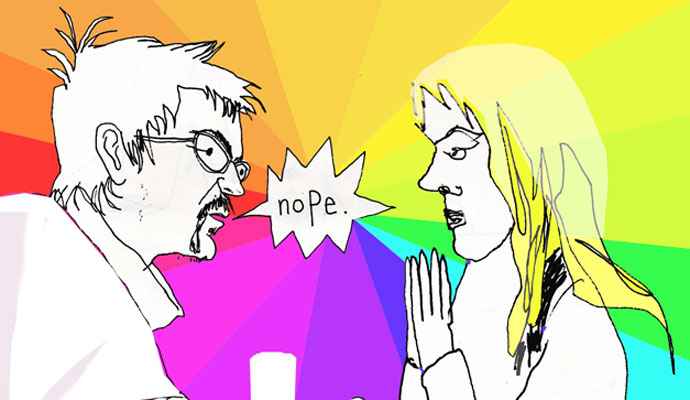 I don’t know how Chris and I went from semisweet, safe sentiments like holding hands at a sports bar to sexting, but if I had to, I would guess that those roads were paved with three Captain-and-diet talls, the two beers, and my declarations that “you can say anything around me,” and “nothing shocks me.” Before I knew it I was staring at a SMS of Chris in nothing but some puke-green, argyle socks.

In reality, things shock me.

I’m not sexually visual person. In my opinion the aesthetics of human genitals aren’t visual at all; they’re tactile. I think humans evolved their respective adult bits because of the remarkable physical stimulation they bestow on us––if we developed them based on visual beauty men would have evolved wieners that looked like pre-raphaelite paintings instead of poorly drawn trees. But most of the time I spent sexting with Chris that weekend I was half-drunk, and if you ask Half-Drunk Jayne (or Mostly Drunk Jayne or Totally Drunk Jayne for that matter) if she would like to see a picture of you in some incredibly tight underwear that barely covers your nether region––she will emphatically say yes. Sober Jayne is indifferent.

That said, even Did I Just Piss Myself Jayne isn’t going to send pictures back to you. I knew Chris could dump me the next day, but any images of my most sacred area would outlive plastic bottles in a landfill. I simply wasn’t ready for that kind of commitment. This doesn’t mean that we didn’t exchange some pretty hot words––talking is fun and practically harmless, and no one has gotten syphilis from sending overly flirtatious text messages.

I wasn’t ready to have sex with him, and I was worried that after all this talk, that was what he expected from me. While we had talked about preferences and mechanics, we hadn’t discussed sex at all. Not the important parts. What if I, high on post coital Oxytocin, became more attached to Chris that he was to me? What if I got pregnant? Had he been tested? Did he want to know if I had been tested? Was he sleeping with anyone else? Did he care if I continued to see other people?

I resolved to talk frankly about sex with Chris. He wanted to come over, but first I was going to avoid the whole situation by going to a pool party at my friend Jack’s house.

Wanting to do anything other than spend time alone at my house with Chris, I asked him to meet me at the pool. To be honest, I asked him to come believing he would pass and I would be free of any awkward interactions.

Instead, he said yes.

I became a ball of anxious little knots coiled into a bigger knot that is my body, so I poured three or four beers on them. By the time Chris showed up all my knots were loose and so was my mouth.

Chris was charming and seemed to get along with my friends. Everything was going smoothly––then She showed up. When I later asked Jack about this woman, whom I assumed wandered into the party off some side street with a few crack rocks in her lungs, he told me that he didn’t know where she came from but she went by the name Ruby T Money. Ruby was an older, weathered-looking woman, with few teeth and even fewer inhibitions.

Chris had been teasing me all night because I lost the top to my bathing suit and had donned a sundress with my bathing suit bottoms. I had gotten in the pool up to my knees but nothing more. “When are you going swimming topless?” He would ask.

The first words out of Chris’s mouth when he saw Ruby were, “I bet I could get her topless.” I was completely turned off by this statement. I felt like he was objectifying her and making judgments about her socioeconomic standing. It was utterly offensive. Ten minutes later, sans request, Ruby T Money was dancing topless next to the pool. Later, she offered to give Chris and I a hands-on demonstration in oral sex.

I declined her generous offer.

At some point after the unsolicited peepshow I found myself in the bathroom talking to my last summer’s fling, Tony. I assumed we were in the bathroom because he didn’t actually want to be seen talking to me. We hadn’t talked or looked at each other in months, including the first half of this party.

A major part of my new take on dating was to solicit advice from people. Should I wear this? When should I call? Is it okay that I catch him sniffing me when he thinks I’m not looking? Earlier I asked Jack how I would know if Chris really liked me or if he was just wanted sex. He shrugged. In a way, his answer surprised me. I guess subconsciously I feel like guys adhere to some code, and if I could only unlock it everything would be so much easier. There had to be some kind of sign. Cher told me it was in his kiss, but I have been screwed over by plenty of amazing kissers (and I’m pretty sure Cher made some kind of deal with the Devil). My best guy friend always told me “don’t believe anything a guy says before he sleeps with you.” This advice has cast a shadow on many a man’s good intentions. From then on, no matter how sweet or gentlemanly someone was I cast a suspicious eye in his direction and wished for some oracle.

In the bathroom, with a dripping toilet as our Pool of Hydromancy[1], Tony seemed like the perfect person to unlock this man/sex code. Tony is one of the few guys that I let my guard down around, who I let treat me well both pre- and post coitally without suspicion, and in the end I still felt deceived and used. With my mouth loose with High Life the words just fell out of it. “How do I know if he really likes me or just wants to have sex with me?”

My words fell to the floor. Tony looked at me sideways and walked out of the room without saying anything.

After Chris and I left, I attacked my fear head on. I told him that I took sex seriously, and because I most often feel closer to my partner afterwards, I don’t have casual sex.

Ok. Given the multiple beers I drank maybe I didn’t come off that eloquently. I might have stumbled, rambled, and said I needed to be with someone that I could “at least be moving toward love with.” Which is also true––but not what I wanted to say at that point in time.

Chris replied, “noPE.” He popped the ‘p’ at the end of ‘nope’ for extra emphasis. It was on that ‘p’ that everything ended.

“Huh?” I replied. Chris went on to explain, quite bluntly, that he was never going to fall in love with me. He had only been in love twice, and I was not going to be his third.

I wanted to tell Chris how insulting that was, how rude it is to say that to a person, (at least a person who isn’t completely evil, like OJ Simpson or anyone else who has been the subject of an Investigation Discovery Channel show). I wanted to tell him that a preppier, more jockish, more stuck-up man, also named Chris, who had underestimated me, had ended up groveling and begging for me. In my head, this monologue would be done in the style of an aging starlet telling off a green producer who wouldn’t cast her in a role. At the end I would throw my martini in his face, take a drag off my cigarette holder, throw my mink stole over my shoulder, and walk away––never looking back.

Instead, I said, “fuck this” with emphasis on the “ck.” I picked up the cigarettes that I loved but I avoided because he hated them, and drank a few more High Lifes. Nothing tastes better than beer fermented in spite.

[1] A method of fortune-telling by water