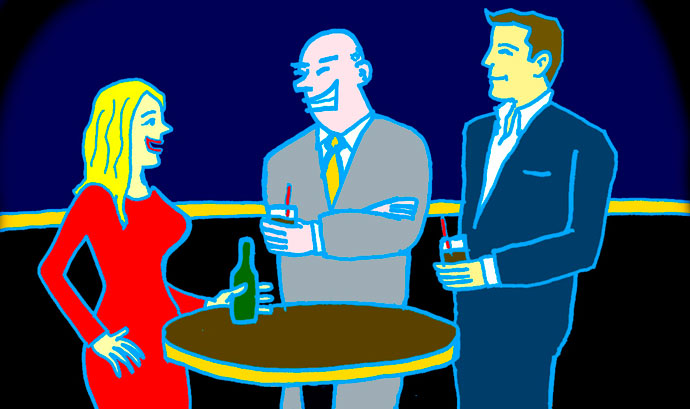 See Jayne Date: One Girl, Two Todds, and A Few Too Many

The night of my first blind date I performed at an open mic and had some celebratory drinks afterwards with my girlfriends. So, through no fault of my own1, I had already had three––maybe more2––drinks before Todd showed up.

I took some creative liberties with the deal I made with my best friends; we had agreed that I would let them set me up with strangers and guide me in my dating endeavors, but in reality they had their own lives to run and couldn’t spend all their time guiding me away from my destructive behavior. So, with only two pieces of advice––“ask him lots of questions” and “don’t make that face”––I entered the savage world of internet dating. I jumped on a dating website and set myself up with the most attractive man I could find.

The dating app for my phone was much better-looking than the website, which smashed the profile pictures instead of using a thumbnail. This effect gave everyone a smooshed Kermit-the-Frog-like face, but even distorted, Todd’s pictures were attractive, so attractive I questioned the legitimacy of his profile, a completely legitimate fear (I had, after all, received a message from Eric from The Grind circa 1994 just before I connected with Todd).

Most internet profiles seemed to follow a certain formula. A proper internet male-seeking-female profile had four or more of these staples: a shirtless picture taken in a mirror, pictures with children (but not their children, the idea is to show they like children but they’re not tied down), a guitar/dog/car picture, a self-description using the words “laid-back” “easy going” “open minded”  and “well-rounded,”  and finally the specification that they are looking for someone to go camping and/or fishing with them.

It struck me as strange that all these laid-back shirtless men were using the internet to find someone to take out into secluded areas. Perhaps I watched too much America’s Most Wanted growing up and my long hours watching true crime shows on television was having an effect on me.

It’s hard to sum yourself up in a profile for complete strangers, and it’s an even harder endeavor to come up with the required “dating headline.”  I toyed with using a completely honest headline, something like, “Girl with fear of intimacy seeks man with commitment phobia so I can continue to play the victim.” Or “Need a second mom? I have nurturing and codependent issues for you to take advantage of!” Or maybe I should express how I feel about internet dating with a straightforward “I am adding ten pounds to your profile picture” or “I think you all are serial rapists.” Instead I leave the simple exaggeration of “Nice girl in the city.” I don’t really know what that means or if it describes me at all (I definitely live in the city so it’s at least half right. And honestly, “nice” is a relative term.)

Todd’s profile was different from all the others: simple, and straightforward; he liked karaoke––and I liked that. I figured it’s a start.

Todd showed up to the dingy bar near my house in a three-piece suit looking even more attractive than his pictures. I have a thing for men in suits, and Todd stood out next to the ripped t-shirts and ragged sneakers. I felt queasy looking at him, and if he’d worn glasses I might have swooned like a bobby socks-wearing teen and fainted at his feet when he walked3 in. He sat next to me at a small four top and his volunteer, who was named Todd also, sat across from us. I had expected Todd #2 to be a young man working off a juvenile mistake, but instead he was a wealthy older man who still carried the characteristics of his blue collar roots. Todd and Todd #2 ordered sodas. I continued to sip my drink.

We sat, making quiet, polite conversation until in an act of naiveté and alcohol-induced honesty, I blurted out that we were on an internet date. Todd #2 erupted when he heard this news, and Todd wilted.

“Todd, you’re lucky. Look at the rack on that young thing!”  Todd #2’s catcalling had a strange upshot, the anxiety I felt sitting next to Todd evaporated.

Attractive men have three major effects on me:

1. I become unbelievably nervous. Symptoms of which may include making weird statements, breaking things, or spilling drinks.

2. I am void of all intellectual and logical thought.

As squeamish as it made me, Todd #2’s sexual harassment seemed to be the antidote to my symptoms. The more he asked me to “twirl in front of the table” or told me he was “going to make sure I had an ass to match my breasts as I walked away to the bathroom”, the less Todd’s presence affected me. Eventually Todd #2 tired of harassing me and went to sit in his car until the station called to pick someone up, and Todd and I moved to the tables outside.

We spoke frankly about what we wanted and covered topics too heavy for a first date.  He asked me how it would work with our busy, conflicting schedules. Zombiefied by his good looks I stupidly believed that we could find time for each other, and in a moment of attraction-induced insanity I told him that I could stay up past his late work hours and wait for him, a feat that would include staying up past 4 am on the weekends4.

I tried to remember the advice my friends had given me earlier. I asked him plenty of questions, and as I learned more about Todd’s solitary long hours driving around, picking up strangers and all their belongings, his deep dark eyes seemed less mysterious and more mysterious.

In hindsight, it’s official. I have mutated my brain with cheesy, exploitive, true-crime television, but then, for a brief moment I had the chilling feeling that I might be staring into the dark eyes of a cold-blooded killer.

My reaction was to be as honest and direct as I possibly could be. I said, “You have the perfect job for a serial killer.”

The goth girls sitting next to me, especially the one in full face paint, perked up and joined our conversation, and as we began discussing different famous murders and my knowledge of true crime stories was exposed, a new look washed over Todd’s face. Not one of mystery and aloof good-looks, no––a look of fear was washing over his face and suddenly I was the one with a dark secret buried in my crawlspace.

This “flip flop” or regression is a habit of mine. As soon as I feel something or start to see myself moving forward (no matter how delusional the progression might be) I pull back, I seize up, I find something wrong and run or act like a jerk. I laughed and joked about how I had portrayed myself and quickly changed the subject.

Not too long after that, Todd received a call from the station releasing them from their duties. As I stood up the drinks that had been accumulating in my stomach rushed to my head and legs. Buzzed, but not buzzed enough to miss the irony of being on a date with someone who takes care of inebriated people, I said goodbye to Todd and I walked the half a block home. Before I fell asleep Todd and I  talked briefly on the phone and we promised to see each other soon.

In the morning, under the grueling scrutiny of an anxiety-ridden hangover a truth was evident to me: this shit would never work. Lobotomized by his good looks and drunk on well liquor I had fallen into one of my old patterns: running after attractive yet emotionally unavailable workaholics to whom I have no connection whatsoever except that I want to lick their face.

I felt helpless, and pledged to actively seek romantic guidance after I had a soda, Alka-Seltzer, and some ramen noodles. In the meantime I quickly scribbled down some rules in my notebook:

1. No more than two drinks on a date.

2. Look closely for signs of unavailability––emotional or otherwise.

3. Don’t talk about your weird obsession with true crime stories.

I crossed out the last line and wrote: 3. Get over weird obsession with true crime stories.