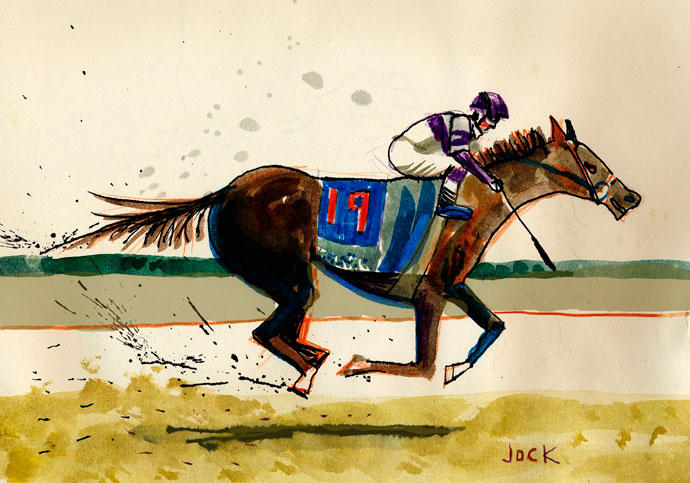 His to Lose: A Belmont Stakes Preview

**For the first time since 2008, when Big Brown entered the Belmont Stakes gate, a 3-year-old thoroughbred will be running with a chance to win the Triple Crown. I’ll Have Another took the first two legs of the Triple Crown, winning the Kentucky Derby in the first week of May as a 15-1 longshot, then taking the Preakness Stakes two weeks later. In those two races, he ran down pacesetting speedster, Bodemeister, near the wire with perfectly-timed rides by his young, unknown jockey Mario Gutierrez.

In Saturday’s 144th running of The Belmont Stakes (post time 6:40 p.m), I’ll Have Another won’t have Bodemeister to kick around anymore. There are those who think––absent his big rival––this will be a cakewalk for him. I’m not one of those people. If there’s one thing I’ve learned in following this game for the last dozen or so years it’s this: bet against the horse going for The Triple Crown.

There have only been 11 Triple Crown winners in history and none since 1978, when Affirmed managed the feat. The 1970s were a fertile time for racing, with three horses managing the feat in that decade. The great Secretariat won in 1973, by taking the Belmont by 31 lengths, in what most people agree is the most dominating horseracing victory ever. Seattle Slew won in 1977.

As I’ve started poring over the racing form for the Belmont Stakes (the statistical breakdown of each horse’s previous races), I’m scratching my head at some of these entries. Is it because no one respects I’ll Have Another’s chances, or because trainers and owners look to the absence of a Triple Crown winner in the last 34 years and figure, we’ve got nothing to lose?

Below, we take a look at the race, and break up the field into five categories. On top, of course, is the much-favored I’ll Have Another, followed by four other groupings, organized by their diminishing chances to win.

Root For, Bet Against: I’ll Have Another

A lot of horse people seem to like I’ll Have Another’s chances to do this thing; most feel it is his race to lose. It would be a nice story for the jockey, until the Kentucky Derby a virtual unknown. Until this past winter, he rode at a small track in western Canada, and by chance caught the eye of Another’s owner, J. Paul Reddam. But still, I have nagging doubts. Don’t get me wrong: I’ll be rooting for history here, wanting Another to win; but cynic that I am, I’ll be betting against him. There is just too much that has to go right for a horse to win this race on the heels of so grueling a springtime schedule.

In the past runnings of this race, many jockeys have made the mistake of underestimating the track itself. Belmont Park is a huge track, the largest in North America. Once around the dirt track, where the Belmont Stakes is run, is 1-1/2 miles (the length of this race). That’s a quarter mile longer than the Kentucky Derby. Most of these horses will never run another dirt race this long in their entire careers. So, not only is there a worry if the horse has the stamina in their genes for such a long race, but will the jockey time his moves correctly.

In 2004, when Smarty Jones was nipped at the wire by Birdstone, Smarty’s rider, Stewart Elliott, was roundly criticized for letting him run too fast too early. In 2009, jockey Calvin Borel (with an unprecedented shot to win a ‘jockey Triple Crown’ by winning all three races on two different horses), moved Mine That Bird too early, and he subsequently tired in the stretch. Both jockeys had little experience at Belmont’s big oval. (It didn’t help that Borel had become a minor celebrity and hit the talk-show circuit hard during Belmont week, instead of riding a few races at Belmont to familiarize himself with the track).

Union Rags was many a turf writer’s favorite going into the Kentucky Derby (he went off as second-betting choice), but ran a dull seventh place, after getting pinched at the stampede out of the gate. I sometimes like this play for the Belmont: a forgotten former darling of the Kentucky Derby trail.

Dullahan ran into traffic troubles in the Derby, but managed to gain ground in the stretch and finish a respectable third. Both of these horses skipped the Preakness, so if you like the fresh horse angle, consider these two.

Paynter is trainer Bob Baffert’s ‘other’ horse, and one he thought would be his 3-year-old with the best shot at winning the Kentucky Derby. He is now something of a forgotten horse. Baffert is very high on Paynter and I am high on his 8-1 odds.

Street Life seems like an improving horse, and might also be one of those 3-year-olds that are just starting to understand the game. He’s a tad green, with only five races under his belt, but his sire, Street Sense won the Kentucky Derby in 2007, plus two other high-profile summer races at Saratoga.

Two Who Intrigue: Unstoppable U, Atigun

Unstoppable U is one of those entries that I keep lingering on when I look at the form. It would be crazy to actually think this horse can win, but that isn’t necessarily a reason to NOT bet a horse. He’s only raced twice, the longest at a mile, but has won both. One of his wins was at Belmont, always nice to see a horse with a win at the track. Would be a HUGE leap for him to actually win this, going a half-mile further than his current longest try, but his 30-1 odds are whispering sweet nothings, and his confident name must be planting subliminal hopes.

Atigun has more seasoning under his belt, having raced nine times, with three wins; his most recent was an off-the-pace win in a lower level race at Churchill Downs. He didn’t fare well in two Kentucky Derby prep stakes races, losing one by nine lengths and the other by eleven. Both of these horses are trained by Ken McPeek, the trainer of Sarava, the longest-odds horse ever to win the Belmont. Sarava was a Triple Crown spoiler in 2002 (sorry, War Emblem) who came in at 70-1. Can lightning strike twice?

Not Horrible: Optimizer, My Adonis

D. Wayne Lukas is a man whose bread and butter is winning big races with unfancied long shots; he trains Optimizer, who finished up the track in both the Derby and Preakness. There was a time when I would bet a “$5 Lukas-saver” on any stakes race where D. Wayne entered a horse (even when I didn’t like the horse). Lukas has won the Belmont Stakes four times, including three times in a row in the mid-1990s. His star has fallen a bit in the last ten years, but you still have to at least look at his horses in big races.

My Adonis has only two wins in 10 races, and three of his four seconds were in maiden races. His jockey, Ramon Dominguez, is one of the best on the New York circuit, so he knows this track. Hard to play a horse on the jockey alone, but Dominguez’s other-worldly 26% winning percentage this year is a baseball equivalent of a team with an .800 win clip.

I’m sure their mamas love these three horses, but I don’t. Between them, they have 4 wins in 28 races (so that’s only one, non-maiden race win), and the highest Beyer speed number is Guyana’s 84. (By way of comparison, Another scored a 109 in the Preakness). Ravelo’s Boy is the only one with any sort of stakes-race experience, and he only came close in one of them, a minor Kentucky Derby prep race in Texas, where he came in fourth.  The other two, are local horses where the connections figured what the hell. All three have odds of 50-1 on the morning line, but those will probably go much higher. Could see Guyana Star Dweej taking some drunken, on-track money for his bizarre name, but don’t ask me to explain what it means, because I have no idea, and not even the faintest curiosity to look it up. If he wins, we’ll all know what it means by Saturday night, and I’ll never bet another race, ever.

Reports came in around noon today that on the eve of running for the Triple Crown, I’ll Have Another was scratched. His trainer Doug O’Neill and owner J. Paul Reddam, explained that a strained tendon in I’ll Have Another’s left front foot would force him out of the race and possibly even end his career. At this point, it seems that the connections had an eye toward the horse’s health. The harsh reality of horseracing is that a thoroughbred like Another, who has won two so-called Classic races, will be worth tens of millions of dollars through a long lifetime of siring. He will command a huge stud fee, and the owners simply couldn’t risk a fatal breakdown. Maybe he will race again, but the mere suggestion today that retirement is on the table indicates that retirement it will be.

How will the defection affect the race itself, though? Strangely enough, because Another wasn’t a speed horse––one who likes to race on the lead––the race won’t unfold much differently. It will affect the odds though, which will be totally wacky now. The horses that were the most serious challengers––Union Rags, Paynter, Dullahan––will take a lot of  the money that would have been put on Another. These three horses’ odds will go way down. Now, too, there is this: Saturday’s winner will always carry a figurative asterisk next to his name, there will always be the unspoken question: would he have beaten I’ll Have Another?

Having no Triple Crown on the line will affect the bottom line at Belmont Park greatly. There would have been 120,000 people in attendance with a chance to witness history––now less than half of those will show up. That’s a lot of money not bet, a lot of beer and food not sold, a lot of admission charge not tallied up. For the sport of horseracing itself, to quote a cynical friend: that you sound you hear is the nation ceasing to care about the race. There’s an old saying, ‘the opposite of love is not hate, but apathy,’ and the industry can’t take too much more of a public apathetic to their sport.