Safe Is Not A Place 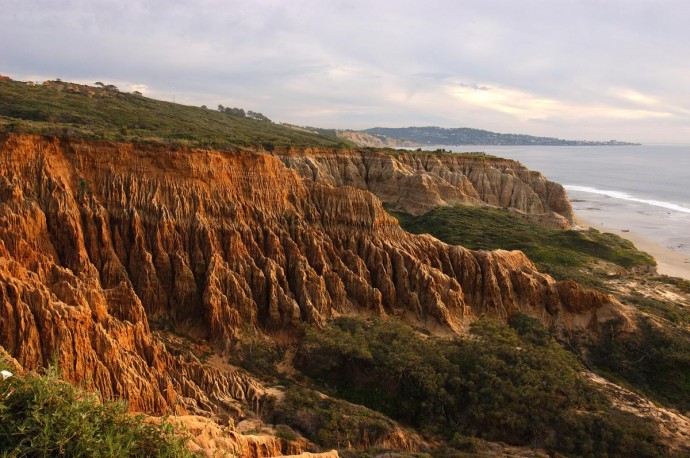 None of it belongs to you. – James Baldwin

I used to be able to see Torrey Pines State Beach from my bed, over the flat rooftop of the pizza-by-the-slice place next door to the apartment complex where I lived. It was a sparkling, raucous mix of estuary waters, sudden egrets, the disjointed flux of blue surf within the intertidal zone, and customers lined up for French-fry stuffed California burritos or fish tacos smeared in white sauce two doors down. Behind it all, the perfect, cosine curve of the Torrey Pines coastal bluff, tufted with groves of the rare pines named for a New York botanist who never actually visited the area, but who clearly had a buddy in high places.

Until two weeks ago, I never knew that a young woman was murdered there. Claire Hough, a 14-year-old Rhode Island kid, was in town visiting her grandparents during the summer of 1984. She went down to the beach late one night and died there. The details are horrible and sad, also very public, and I won’t describe them here.

San Diego police announced this fall that they’re sure the killers were Ronald Clyde Tatro, 67, and Kevin Charles Brown, 62. Tatro, who had a long and disgusting history of sexual assault, drowned three years ago in a Tennessee boating accident.

Brown, a retired SDPD criminologist, recently killed himself. The San Diego U-T reported that his body was found hanging from a tree along Highway 79 at Cuyamaca Rancho State Park on October 21. Brown’s widow, claiming cross-contamination, maintains his innocence.

The man who discovered the body of Claire Hough, and who was not considered a suspect in the case, also killed himself – in the 80s, and by jumping out a window. Before he died, though, he told her parents, Samuel and Penelope, that he had a vision of two men killing an angelic little girl. He considered himself psychic.

For a few different reasons, I am rereading Italo Calvino’s brick-thick anthology, Italian Folktales. In the tales, violence (sexual and otherwise) is both arbitrary and highly creative, directed almost always toward young women.

In one folktale, a beautiful young woman known for her prankster ways plays a number of practical jokes on the prince. Without much ado, they become engaged. Realizing the possibility that he might seek revenge on their wedding night, the girl commissions the creation of a life-sized pastry doll. Its artificial heart – a pig bladder –is filled with whipped cream. She tucks the doll into bed and then hides in a nearby wardrobe.

In comes the prince, who mounts the bed, as princes do, and takes out his trusty dagger. Apparently feeling that it’s finally payback time, he repeatedly stabs his new bride in the heart. Whipped cream squirts everywhere. Licking what he thinks to be her sweet blood from his princely face, he regrets murdering his new wife and despairs having killed her.

Our clever girl leaps from the bureau and reveals to the shocked prince that she is…still alive! All is forgiven in terms of stabs to the heart, also pranks. Although I picture them falling into a heap of girl-shaped pie, exchanging Italian kisses while the burst pig bladder lolled among the royal pillows, I expect the girl kept a sharp eye out. By then she probably knew what we do: that what a man might do to a doll he might also do to a girl.

This summer, The Atlantic ran Julie Beck’s essay, “A (Straight, Male) History of Sex Dolls.” Maybe you read it. Beck traces the history of these dolls back through Ovid, 17th century leather puppets used by Dutch sailors, and a 1950s-era German-manufactured doll series named “Lilli” thought to belong to Barbie’s family tree. Beck describes her conversation with Davecat, a “synthetic love” advocate within the iDollator community who explains that the vast majority of men who own dolls treat them like “goddesses.”

Many iDollators, Beck reports, use the “women are cruel” argument to bolster their stance that relationships with synthetic women, rather than “organic” women, are more desirable. One of her sources cites the Margaret Atwood quote, “Men are afraid that women will laugh at them. Women are afraid that men will kill them.”

That very quote surfaced and resurfaced in my Twitter feed last summer, following the May 23 Isla Vista massacre led by an extremely scary UC Santa Barbara 22-year-old, whom the NYT reported as a self-described “incel,” or “involuntary celibate.”

This man widely and explicitly documented online both his desire for and his fear of “young blondes” before killing six UCSB students and injuring 13 others in a rampage that involved three semi-automatic weapons and his black BMW.

Although the Los Angeles Times published at least part of the IV murderer’s 137-page plan to torture and kill young women, I could not bring myself to read past the first few paragraphs. I have six younger sisters, and my fear for their safety is too big already.

Instead, I watched the #yesallwomen hashtag emerge amid the Atwood retweets over that Memorial Day Weekend. Women I didn’t know shared experiences with which I was extremely familiar: walking down the middle of the street at night to avoid being pulled into cars, carrying keys like knives, guarding cocktails at the bar, being groped, being flashed, being violated, degraded, dismissed, or threatened. Two dear friends were in town visiting for the weekend: my high school buddy and his pregnant wife.

As our conversation wound down, my out-of-town visitors and I went for a hike along the crowded holiday trails at Torrey Pines. The ocean was a brilliant blue that day.

In 2005, a South African woman named Sonette Ehlers invented the Rape-aXe, a female condom lined with interior spikes. The idea, which critics likened to a medieval torture device or modern chastity belt, was to temporarily disable and potentially help physically identify a man raping a woman wearing the Rape-aXe device. This “solution” was problematic for both logistical and philosophical reasons that I won’t enumerate here, but then this past June I read a Slate article by Kristen Hohenadel about “defensive architecture,” designed to discourage homeless people and prostitutes from hanging out in city spaces.

Metal spikes come to us by way of the Ancient Greeks. Called a caltrop, it’s named after the star thistle. Soldiers used caltrops to slow horses, elephants, chariots, and men creeping through the night with weapons. The CIA still publically praises the use of buried or scattered spikes, which punctured the sneaker-clad feet of Chinese soldiers during the Korean War and can topple a plane upon landing. Death by buried spike is slow and demoralizing, often accompanied by infection.

Identifying that perimeter between public space and private property is “neither certain nor predictable,” according to the California State Lands Commission. Rather poetically, locating waterway boundaries is determined to be “a marriage of four factors.” These are, roughly: the title, the law, physical science, and usage, “in the past, the present, or possibly in the future.” In California, residents have the constitutional right to walk the so-called mean high tide line; basically, that damp distance between the ocean and the dry sand. Moreover, as activist Jenny Price writes, many homeowners have (reluctantly) agreed to allow beachgoers access to some of their dry sand in exchange for sweetened building permits from the city.

That doesn’t stop them, unfortunately, from hiring private security guards on ATVs to zip around misinforming beachgoers of their right to be there, Price notes. Persistent tension, defensive architecture.

I was thinking about this as I walked down to Torrey Pines State Beach on a brightly carved November morning last week. As I crossed into the parking lot, someone’s car clanked over the metal spikes of the tire strip marking the exit.

Santa Ana winds had scrubbed the sky clean and Los Peñasquitos lagoon was waxed silk. Someone had left an empty champagne bottle on the deck of Lifeguard Tower No. 4; an Amtrak Pacific Surfliner passenger train silently gemmed the track en route to Santa Barbara. Across the lagoon, cars gleamed on the I-5.

The tide was too high to head north, so I trekked south along the waterline hopping between big, wet sea stones; the Grande Colonial Hotel in downtown La Jolla visible past miles of ocean cliffs, Camp Pendleton military base to my back, and Mexico greatly in the distance. I was thinking about 14-year-old Claire Hough. I was thinking how defensive architecture only reminds me that the body is not a building. That the body is a marriage of innumerable factors, all sacred, all secret.

I was remembering how when I was in fifth grade, a grown woman in a shopping mall bookstore suddenly appeared at my elbow when I was a few rows away from my mother. She dragged me to the doorway of the bookstore’s darkened storage room, hissing at me that she planned to scratch my veins with her fingernails until my blood ran dry. She said, Come back here, little girl and I almost did, out of fear and stupidity, until it occurred to me that I could say No, that I could run away, and I did.

I was remembering a time when I was hiking alone in Australia, 20 years old, along a hot and dusty riverbank a few miles away from the rural fruit packers hostel where I was staying. The aromatic, oversize shrubs lining the riverbed were poached in white sunlight, and it was silent except for the hurtling bugs, when a voice in my head said, Turn around and run. And I did.

I was remembering a time when someone I knew and never wanted to see again parked his truck at the Torrey Pines lagoon and texted me, late at night, to leave my house and come down to his car: If you don’t come to me I’ll come to you. Later, overtures ignored and a few days before Christmas, his after-midnight texts: Die bitch. Die cunt.

The American Psychological Association calls mass trauma the “unusual intersection of the personal and the public,” a phenomenon that makes us think we can remember exactly those minute, personal particulars when 9/11 hit, during the Challenger disaster, or when JFK was assassinated. We are natural storytellers, and we want to see ourselves, perhaps need to see ourselves, in stories, as Thomas Newkirk writes.

Fair or not, I build invisible bridges between myself and the outside world so that I feel less alone. Science suggests that probably you do, too. From a cynical point of view, this is pointless and maybe even narcissistic – “grief thief” being one expression of that disdain, indulgent sentimentality certainly another.

So I know that it won’t matter very much, this imperfect lei of sorrow I’ve woven into the Pacific Ocean for Claire Hough this morning. I know that Claire Hough has nothing to do with Italian folktales, anti-homeless spikes, hashtags, Australia. Her life, like mine, neither certain nor predictable; her life, unlike mine and unfairly, violently over. There is no negotiated “mean” between these two places. Safety is not general, it is specific.