Have Yourself a Merry Little Christmas (Probably) 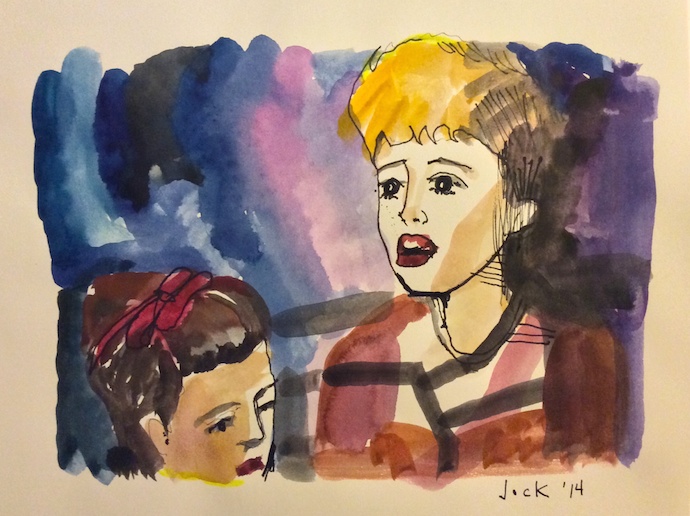 So, hi. Happy holidays. I don’t have a family. That may seem like an odd admission up front, or perhaps untrue, or exaggerated, but I brought it up because let me paraphrase what I’ve been hearing from you and everyone you know and all of western media since about the second week of November: “Hi. Happy holidays. I have a family. I like to family my family with my family, and when I family I always family extra-family family-style on family time with a family family in my family near my family. Also I family. Do you family? Family. FAMILY. FAMILY FAMILY FAMILY. Loser.”

As you can imagine, that kind of inhospitable drone is not fun to listen to for approx. six weeks each year, just in case I were ever to forget whoops, I don’t have a family. And I do have some family, just not in the way you’re supposed to. I have a wonderful sister and she’s the single mother to a wonderful daughter and all-but-engaged to a really great guy with three kids of his own, and I am kind of riding the fumes of their family activities this holiday season, some of the time, but I don’t have my own family to gather around the hearth or whatever. I had parents; they’re dead. My mother only died two years ago in fact and for a long time it was just us two, and my mother was very wise, and here’s her wisdom about holidays: “Holidays are for children and rich people.” I think she’s right, and I miss her, so I don’t have her, and my father was great but died when I was a kid and always kind of distantly orbited the family anyway, often because he was working three or more jobs, all of them menial.

And I don’t have any kids, nor would I wish that upon myself, and I don’t have a Significant Other and have never had a Significant Other for the simple fact that I don’t have a ton of free time to spend trying to get a guy interested in me and then constantly working to try to keep him interested in me until he finds someone younger, better looking, and less neurotic. How contemporary US adults even have the time to do a thing like “date” mystifies me; I’m too busy alternating between “oh, shit, I’m behind on [work of some kind]” and “oh shit, I’m running out of money.” Gay men are also really shallow (sorry, it’s true, we are) so I’d need to lose about forty lbs. and ten years and regain my hair for me to be even remotely a viable candidate. Which is all to say that I have no current way of having a family right now, nor do I envisage figuring out a way how to acquire one in either the near or distant future.

Which, in turn, is all to say that this may surprise you but not everybody has a family, by accident or by choice, and every holiday we collectively have to put up with getting the big backhanded slaps of, for example, “So are you spending [holiday] with your family? No? Oh, that’s too bad. My ceaselessly loving family radiates out from me in all directions like light from a star. Sucks for you I guess. You must be really lonely. Do you, uh, volunteer or something? Well, whatever. Happy holidays!” You’re not doing this on purpose, obviously, at least most of the time, in fact you’re probably unaware you’re doing it at all, and maybe genuinely do feel bad for people like me, but we don’t actually really care how you feel, we just want you to wrestle your joyful noise down to the carpet for a spell so we can go about our business like the reasonable adults we are and not end up feeling vaguely guilty for not having families. I can feel a little guilty for being too fat and snotty to be able to snare a boyfriend, I guess (though carbs are superior to men), but it’s hard to really feel guilty that both my parents died of lung cancer or that, since I am a male, I can’t give birth, no matter how hard I might try.

But instead of just bitching I want to excise from my misc. vitriol one thing for you to think about, and that thing happens to be a several-decades-old Christmas song pulled from a Hollywood musical. (I do have a history with Christmas music prior to converting to Judaism and learning that Chanukah music is just about as bad, except I can’t parse the Hebrew or Yiddish lyrics, so I have considered this.) The song I want to offer you here is sort of the old-school chestnut doom metal take on Christmas togetherness, namely “Have Yourself a Merry Little Christmas,” but not the rewritten-lyrics version subsequently crooned by everybody from Sinatra to Michael Bublé, the actual Judy Garland original from Meet Me in St. Louis (the clip here conveniently subtitled in Spanish in case it’s Feliz Navidad where you’re at):

The context here is that it’s Christmas 1903 in St. Louis and Garland is signing the song to her youngest sister Tootie to try to cheer her up in light of the fact that the family’s going to move to New York and friendships will break up, as will romances that eldest daughters Esther (Garland) and Rose (Lucille Bremer) are kindling, or else the family will splinter if the older daughters do marry, and in any event they’re all going to miss the 1904 St. Louis World’s Fair (crushing, I know). So it’s not as if, say, both of Tootie’s parents just died of lung cancer or something, but the fragmentation that Life Going On entails is nonetheless upsetting to Tootie, who’s just a little girl and anyway, as far as I know, there are no Hollywood musicals about cancer, though there should be, and there’s probably a Bollywood musical that deals with cancer in some context but I’m too lazy to research it.

So anyway the tot is seriously bummed so this is what Garland intones to her:

Have yourself a merry little Christmas,

Let your heart be light,

Someday all our troubles

Will be out of sight.

Garland here neither looks nor sounds as if she’s buying in at all to the idea that anybody’s troubles will be out of sight now or “someday,” though. The lyrics then get a bit more upbeat re: troubles being resolved and “faithful ones being near to us once more,” but by this point the shot has moved away from a framing of Esther (Garland) and Tootie and a spectacularly fake-looking music box and is just a noir-ish lit closeup of Garland, who looks as if she’s going to need the string section to take over for a chorus so she can sob, hyperventilate, tear the curtains, etc. Meaning it’s supposed to be optimistic but obviously it’s not getting the job done, not even for the singer.

Then the shot flips to an actually-crying Tootie and you get the first ringer of the song: “Someday soon we all will be together…if the fates allow.” That’s not fun. That’s not uplifting at all. That’s kind of an assumption that mayhem, of whatever strength or variety, is coming this way. This is the line that second-most gets scrubbed in later versions, because since when is faint hope a snazzy upbeat God, Guns and Family kind of thing? Since approx. never, of course. So you think damn, Judy, that’s a little dour, but the song then crests on the other often-revised line: “Until then we’ll have to muddle through somehow.” The “how” in “somehow” here is the highest note Garland hits, and she practically lies down on the syllable and goes to sleep on it she pushes it so much, but there’s no way to read the line as anything other than tentative at best.

But there’s going to be a big turnaround, right, because this is a Standard and regular-rotation Christmas song pretty much from the day the movie was released and the song blew up in 1944, right? No. Here’s the entire remaining lyrical content of the song: “So have yourself a merry little Christmas now.” That’s it. In and out in way under three minutes, super punk rock. When you look at it, it seems way too grim to be part of any kind of festival season, right? But check the date of the original: 1944. WWII. People then were not at all quite so sure that they all would be together if the fates allowed; in fact the fates seemed kind of against the idea. Same reason that Vera Lynn’s gloomfest “We’ll Meet Again” (i.e. “We’ll meet again, don’t know where, don’t know when”) was such a hit (and sung recently on the series-ending Colbert Report, in case it sounds familiar). But then boom, WWII is over, the US booms in many ways and the song is recast by Sinatra and Bing et al. in a form so glossy you could use it as a mirror, and that’s the version you probably know.

So, in all this, I’m not seeking to bum you out like Tootie and Esther, because after all this is a wartime Hollywood musical, of course there’s a happy ending (the family stays in St. Louis, the oldest daughter gets engaged, Garland is either going steady with her love interest or more, and the whole family, sullen Tootie included, gets, joy of joys, to attend the World’s Fair). But my rambling here is in service of my former point about how not everybody in the world has a family, or anyone at all to be together again with if the fates allow except maybe a cat or something. Sometimes by accident and sometimes by choice. And I’m not impugning to you we should celebrate our loneliness, or stand around in front of a window with a lot of makeup on and look kind of narcotized like Garland in the film, but rather that instead of celebrating the awesome permanence of your family and your family’s family etc. you should instead celebrate that those bonds are there at all, because, whether by accident or by choice, via lung cancer or via getting shot by a cop or via world war, they’re more fragile than you might think, and yeah: nothing lasts forever, so, even though you’re usually not doing it on purpose, take some time out from rocking your blood-affiliations like bling and think about those affiliations, blood or non-, and if I’m allowed to get Deep here, having already gotten bitchy and gloomy, think not just about your family but about the world’s family, and about how many bonds are there, and how fragile they might be, and what you could maybe try to do to when you’re done celebrating the shit out of the holidays to knock the fates out of the picture and do something, even a little something, to make sure that more people who want to feel that togetherness but currently can’t, and sit in various kinds of shadows instead, are actually able to feel it, that yeah, family is important, not just your family, though, but everybody’s family.