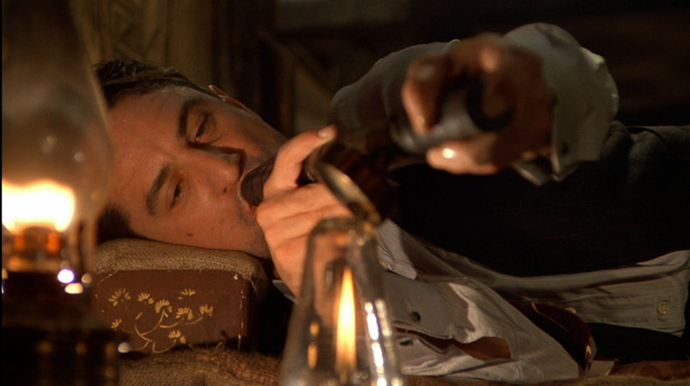 Possession: Once Upon a Time in America

Prior to the rape that leads into the intermission of Sergio Leone’s Once Upon a Time in America, Robert De Niro’s Prohibition-era gangster David “Noodles” Aaronson takes childhood sweetheart Deborah (Elizabeth McGovern) to dinner at Long Island hotel that’s closed for the off-season. He’s had it re-opened for the night, he brags, and so the two of them dine in the Art Deco ballroom, served by a platoon of tuxedoed waiters, extras in their staged-managed, epic romance. In the limo afterwards, with their sumptuous set replaced by cheap rear projection, he starts tearing her clothes off.  Cramped, brutally sound designed, and quite protracted, it’s meant to be a difficult scene to watch. I have this terrible feeling, though, that each of her shrieks is intended to emphasize the agony of his passion, that it would drive him to so hurt the one he loves.

This is not a remotely tenable interpretation, of course: If the recent cycle of Senate elections has been at all instructive, it’s been as an apparently necessary reminder that rape is in fact something that befalls a woman, and not, say, some dude’s idea of God, or, in Leone’s case here and elsewhere, a male protagonist’s sense of himself. But the spirit of Once Upon a Time in America—roughly, a doomed desire to possess something already lost—is affecting when separable from its dubious depictions of the flesh.”Of which there are many: Leone’s final film, currently in revival at New York’s Film Forum after a restoration played at Cannes earlier this year, offers boyhood reminiscences of trading the neighborhood slut a pastry for a handjob; nympho Tuesday Weld begging to be slapped around; a triggerman fondling a nipple with the barrel of his gun; etc. But these fantasies of a frenzied adolescent libido are hardly the only memories that the film aspires to pin down.

In the nearly feature-length portion of the film covering the youth of a group of aspiring gangsters who roll drunks and apprentice to rum-runners on the Lower East Side at the outset of the Roaring 20s, the tykes talk about “divvying up” the profits of “the gang”—it’s pure role-play. When one dies, his voice goes all husky and he whispers, “I slipped,” as if imitating a movie hero he couldn’t have heard yet, but which Leone certainly had by the time he was that age.

In her New Yorker review, Pauline Kael recounted a wisecrack from one of her ever-quotable plus-ones: “’It wasn’t just that you never had the feeling that they were Jewish—you never had the feeling that they were anything.’” Well, of course not: as, presumably, the children of immigrants, their American dream would have been assimilation—also the dream of almost every Leone film (even the ones technically set in Mexico). Once Upon a Time in America is hardly the first Leone film worthy of the title: his super-sized iconography of the Western, with chiseled close-ups gazing like the faces on Mt. Rushmore and land-grab vistas, the man and the landscape, offer a vision of individual manifest destiny so persuasive that many have missed the left-wing politics.

But still, iconography is a funny thing. A grocery store here in Reykjavik recently held its “America Days,” featuring red-white-and-blue bunting and cardboard cutouts of Elvis, John Wayne and Obama surrounding displays of Twizzlers—this sort of mockably transparent enthusiasm to participate in what you and I take for granted is everywhere in Leone. Who but a foreigner would begin a movie called Once Upon a Time in America with Kate Smith?

Too, there is Leone’s blissfully tin ear. (J. Hoberman’s explanation for the title of the director’s Duck, You Sucker!: “Leone insisted that this lame phrase was common American slang.”) Once Upon a Time in America has nothing to match the garbled gravitas of the “old Mexican proverb” in Fistful of Dollars, but there is Yiddish—one apiece of “tush,” “schmuck” and “tuchus,” dropped into otherwise deracinated dialogue—and Richard Bright’s management heavy intimidating a union activist: “Listen to me, you socialist asshole. We don’t give a good fart about the workers and their movements.”

But the real foreign country in Once Upon a Time in America is the past (they do things differently there). If assimilation is a matter of living up to the totality lurking elusively behind a culture’s specific incarnations, that’s a pretty fair analogue for this movie’s aspirations vis a vis the Hollywood gangster picture, and why Leone’s nostalgia is maybe ours, too. It’s pure backlot, with streetlamps glowing through the rain, platinum blondes with ironed curls. (In retrofitting New York in heavily varnished deep brown wood, and exposed tile, tin and brick, the set designers anticipated contemporary gentrification—as did the location scouts responsible for Williamsburg and DUMBO’s frequent doubling for the LES.) The two poles of Noodles’s life are archetypal: the best friend, partner in crime and eventual arch-rival (James Woods’s antsy Max) and the good girl he can’t go straight for.  When obsessive close-ups get so near to McGovern’s face that you can count her blemishes, it’s the actress, not the character, we understand to be burdened by impossible expectations, and unlike in the rape scene the man’s folly here seems genuinely tragic.

The movie, bookended with De Niro’s revelry in a Chinatown opium den, is some kind of pipe dream, and has proven fittingly, if maddeningly, elusive. It was cut from three-and-three-quarters-plus hours down to two hours fifteen for its disastrous US release in 1984,  and this spring’s 245-minute cut was pulled after ongoing restoration issues and rights disputes over footage still held back from the 269-minute director’s cut intended by Leone’s heirs. (It’s the original European theatrical cut, subsequently released stateside in 1985 and available on DVD, that’s currently at Film Forum.) Once Upon a Time in America is mostly episodic, with every scene a grand gesture—from De Niro stirring his coffee, menacingly, for minutes, to a party Deborah attends, flanked by a cardinal and an admiral—and the finale an incoherent mess, a Big Reveal that exists not to connect divergent plot points (I still don’t know who the gunmen looking for De Niro in the opening scenes are), but for the sheer fact of revelation, so that all the past has been building to something.

Even out of the opium den, De Niro is dreamy: in the 1960s framing story, when he enters to a Muzak version of “Yesterday,” but also in the 1930s flashbacks: the child actor who originates Noodles goes into prison in 1921, and the character never seems to have gotten over the disorientation of having emerged twelve years later as De Niro. He always sounds like he’s talking to himself. When Noodles returns to the old neighborhood in the 60s scenes, he’s greeted by a headstone pulled up out of the earth by a bulldozer to make way for construction. The 30s scenes climax at a party with a coffin-shaped cake symbolizing the repealed 18th Amendment; when Max picks up Noodles from prison, he does so in a limo with a naked hooker laid out like a stiff. I don’t mean to close on a necrophilia metaphor—too much like something Leone might do—so better simply to say that the movie is haunted.