Pipe Dreams: Why J.R. Smith Isn’t as Weird as You Think 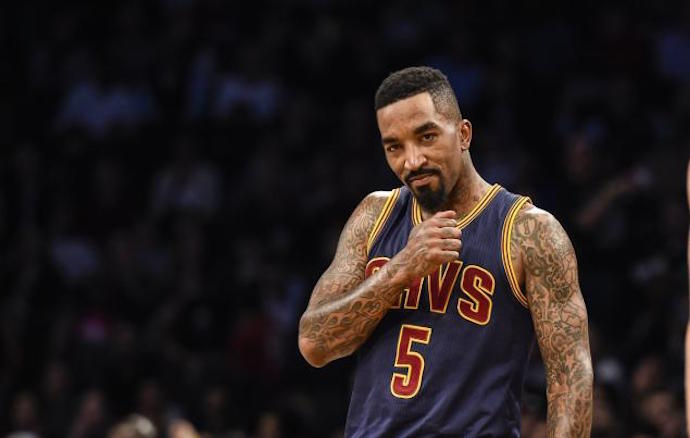 Things had been getting chippy at the Garden. The New York Knicks were down 19 with a buck 15 left, and the visiting Denver Nuggets still hadn’t pulled their starters. They were not about to be punked like this. Not these Knicks. Not the 9 and 17 and going nowhere Knicks. Not a Stephon Mebury-led squad under the, um, tutelage of Isiah Thomas. So their “coach” whispered a warning to Nuggets star Carmelo Anthony that he’d better stay out of the paint. No. Easy. Buckets. And they played on. And then Nuggets guard J.R. Smith gathered an outlet pass, glided into the lane, jumped into the air for a lay-up and…

Watch out, though, J.R. Smith is crazy? He’s like the most unpredictable dude. Nah. You know what, everything he does makes perfect sense to me. If he seems not to belong it’s because he’s like Albert Camus’s Stranger, sent to teach us how we are and how we live. He’s like Isaiah (only, spelled with precedent, like the prophet). He is tossing crumbs of #truth and we, but obstinate birds, are asking “What is this, Pepperidge Farms?”

Let’s get a few things straight about J.R. Smith. He likes dating models and popping bottles. He likes tweeting. He likes riding shirtless. He likes heaving no-chance, 32-foot, triple-covered, back-to-the-basket nightmares that make his coach want to strangle him. He likes temporarily vacating the floor to hug opponents instead of playing defense. This last one is mostly irritating to fans who paid for tickets to the world champions vs. [team Jason Terry plays for this year].

Sure, it’s irritating, and in some ways terrible, but it does make sense. Three reasons.

Reason 1: This particular game actually doesn’t matter. His team is going to be the top seed in the Eastern Conference, at worst the two seed. Teams like this year’s Cavs spend the entire regular season playing half-hearted defense and resting guys with minor injuries. Gregg Popovich makes this point throughout the year with his playoff-bound Spurs, gifting big minutes to back-ups, yanking starters with outcomes still in question. The season is too long, and good teams act accordingly.

Reason 2: Smith intentionally elbowed the same Jason Terry in the face during a playoff game. When it mattered. But, look, they’re friends. Notice how the league wants there to be hero/villain drama but actually they’re all just out there making a living shooting a basketball into a hoop?

Reason 3: Again, 82 games. Do you understand how hard a professional basketball game is on the human body? This is why playoff games are completely different from regular season games. You simply cannot sustain a playoff level of defense during a sardine-packed regular season.

The games we’re watching right now aren’t the real thing. They’re just a performance of professional basketball, a copy. The ball is still round and the hoop is still ten feet high, but that’s about it.

In the post-season, J.R. Smith is a guy you want on your team. Obviously. And the guy is dialed in. He’s not untying an opponent’s shoelaces while his teammate shoots free throws.

See, you are watching J.R. Smith doing these things and shaking your head like they don’t make sense. You’re wrong. The things J.R. Smith does, both on and off the floor, do make sense. They tell us so much about the world of the professional basketball player, one that is scripted in such detail, scripted to give fans exactly what they want to see and hear. Actually, J.R. Smith’s decisions are usually just moments in which his mask slips a little bit and we see the NBA for what it really is: a big ole neck tattoo covered by an 82-game turtleneck.

I will give you that Smith is impulsive from time to time. But only from time to time, the exception and not the rule. Look, being a professional athlete requires an above-average degree of discipline and commitment. Consider how one gets gains proficiency in making basketball shots from 30 feet away. Pick a spot and work at it for a few weeks. Strengthen your shooting wrist. Shoot it a hundred times. Shoot it a thousand times. See if you make progress. Then, see how you do when someone 6”5’ is guarding you. Three out of ten? Four out of ten? This little talent of J.R.’s took some practice. You know what else took the opposite of impulsivity? Defending Klay Thompson when it actually mattered.

Speaking of annoying defenders, J.R. Smith did once hack Raja Bell pretty good one time. If you’ve heard of Raja Bell, you understand that this may have been sensible. This was not J.R. Smith being weird. His on-court altercations are not as serious as the press makes them out to be. Every time something happens I hear people say “Oh, you know, J.R. Smith is a dirty player.” Did you mean “thug”? Methinks the lady doth Artest too much.

Smith doesn’t have the patience of a LeBron James. If you blow in his ear, he’s probably going to give you an elbow next time down the floor. If the zebras see it, it’s going to cost him a necklace. But that’s not weird. He’s got a reputation to uphold, the same reputation he carries off the court.

It’s true that J.R. Smith has said some newsworthy things off the court, but again, the behavior and decision-making are never truly weird. Following the Cavs championship run this past year, Smith didn’t wear a shirt for about 100 hours. Why do we wear shirts when the weather is warm? Do we need them on dance floors, private jets, parade floats?

The President of the United States, seldom seen without a suit on, did notice Smith’s playful impropriety and addressed it. But what a weirdo? Not really. It’s rather astonishing that Smith was able to profane so heartily, so playfully, so rambunctiously. Kid is doing it. Then, J.R. Smith’s brand Team Swish started selling shirts with just his bare torso. He found a way to live the dream, seriously. The White House became his living room. 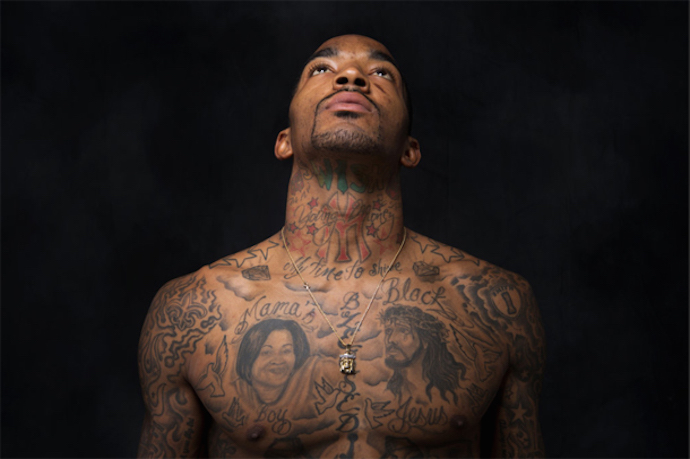 Nudity isn’t new for Smith, and therein lies an obvious metaphor for J.R.’s particular brand of communication. He tells the truth. Or when he literally provided a snapshot of his home-life with model Tahiry. It was a mostly nude photo of Tahiry, which is less alarming when one considers that Tahiry permitted hip-hop magazine XXL to wear a “Butt Cam” on her famous posterior.

Perhaps the most infamous moment is when Smith responded to an adoring ladyfan—and possible love interest—by gently inquiring, “You trying to get the pipe?” In context, Smith was cutting to the chase, subverting the rules of a more subtle game of cat and mouse. But therein lies a lesson from Smith’s on-the-court honesty—there is also joy in just shooting it from wherever you happen to be standing. Instant gratification. If it goes in, great. If not, the young lady can call a different plumber.

But the media expects us to think J.R. Smith is weird, crazy, outrageous. For instance, CNN’s Bleacher Report recently ran a story on J.R. Smith throwing his dog a birthday party. It was meant to leave its readers saying, “Man, J.R. Smith, he’s from another planet!” But, what if Rob Gronkowski threw his dog a birthday party? That’s right, it’d be clickbait for the alarming number of fanboys who follow Gronk’s every move. Look at this.

…Mardy Collins fouled the living shit out of him. J.R. Smith got up angry, like ya do when you are hanging vulnerable in mid-air and get clotheslined from behind. Then, hyper Knick Nate Robinson decided he wanted a piece—even moreso than Collins—and guess what? Smith treated him to a Greco-Roman maneuver that sent them both tumbling to the second row. I really don’t see anything bizarre about this decision. Is he supposed to back down, from 5”9’ Nathaniel Cornelius Robinson, after getting clobbered by Mardy [Last Name]? What would you have done? Tell the truth.