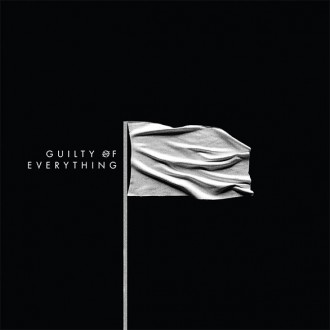 There are some albums you’ll play over and over again until they become part of your bloodstream, until you’ve memorized every bit of reverb and every note hit.

For me this year, that album has been Guilty of Everything by the band Nothing (Relapse Records). Full of riffs and crescendos, it’s been stuck in my head since the first listen. It’s been hailed as the rock record of the year, but that’s some shit for another website.

Lyrically, Nothing’s frontman Dominic “Nicky” Palermo manages to offer up sparse, impactful lines full of imagery and loss. It turns out he became a fan of existentialism after serving two years, and he hates Ayn Rand. I called him on a Tuesday night to talk about art, incarceration, and writing lyrics.

SARAH ROSE ETTER: Did you do anything fun today?

NICKY PALERMO: I went and checked out that David Lynch installment in the PAFA (Pennsylvania Academy of Fine Arts).

NP: It was awesome.

SRE: Yeah, Six Men Getting Sick was definitely my favorite.

NP: It was pretty cool – I never got into any of his early illustrations or paintings. Pretty intense stuff.

SRE: I like how many times he just glued cigarettes to the canvases.

NP: I know, I wanted to pull one down and try to smoke it.

SRE: Well, I was actually calling to talk about books. I noticed in a lot of interviews, you’ve touched on Irvine Welsh and Sartre. When did you start getting into that?

NP: Probably not a surprise, but a lot of that stuff I started to get into after I was locked up for a little while. The first book that I received when I was in there was Nausea by Sartre. My brother sent it to me. He was a big reader. I read a lot before then, but that was when I really started pounding away. That book opened up a lot of doors for me and I became a bit obsessed.

SRE: What made you obsess?

NP: It was relatable, the uncontrollable nausea being around the common man. It was such an interesting, brave way of thinking for me. I had never gotten into it – and it got into my head to find more work like that.

SRE: Yeah, I noticed you also call out Dostoyevsky a lot. Something similar is happening in Notes From The Underground.

SRE: What was the draw to those books while you were incarcerated?

NP: I was in a weak place trying to become not a weak person. It was a good place to try to look for answers. People look for answers in different places when they ‘re locked up – whether it’s drugs or violence or religion. I tried to find myself – I never did – but I tried to guide myself to get through. So I guess I grew with the books that I was reading.

SRE: Do you consider yourself an existentialist? A lot of the stuff you bring up is Russian lit or existentialism. 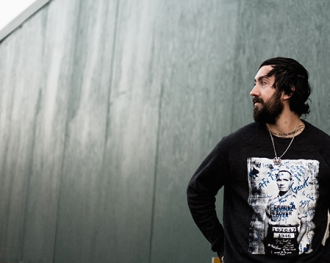 NP: I get asked all the time: What do I consider myself? And I don’t really consider myself anything. There have been existential points in my life and there are lessons to be taken from everything: Human alienation can really change the way you think. If anything, I’d chalk myself up as being pessimistic and that’s about it. I’m pessimistic and cynical.

SRE: But there’s still something a little hopeful about your music.

NP: There’s a hidden beauty in all types of hope and despair. That’s what makes those things beautiful at times.

SRE: I read somewhere that you were into Charles Bukowski. Do you want to argue about him?

SRE: I loved Ham on Rye, but it starts getting a little drunk white dude for me.

NP: Yeah, it’s definitely difficult to attach yourself to a writer who has become so mainstream. People kind of made a mockery of him. But he always knew that would happen if he ever struck fame, and he started to see it happen, but he never cared. That was the cool thing about Bukowski – he never cared about anything, really.

SRE: I guess he was a bit of a nihilist.

NP: I’ll always have a place in my heart for him. I still pick his books up every once in awhile. Some of his poems got me into a lot of the writers that I read now. I didn’t have any internet when I was locked up and a lot of his poems mention other writers – Schopenhauer and D.H. Lawrence, people I’d never really heard of. So I’ll always have some love for Charles.

SRE: What about Hemmingway? Did you ever get into him?

NP: Hemmingway was always too masculine for me. Very egotistical and entitled. Honestly, I never really tripped and fell on any of his words either.

SRE: What are your top three favorite books?

NP: Notes From The Underground will always hit home for me. Just looking at the cover brings me back to that point when I first read it. He was one of the first writers that really made me think about free will and man not seeming to have a purpose.

The Trouble With Being Born, by Emil Cioran that’s another one of my favorite books.

Trout Fishing in America by Richard Brautigan, he’s one of my favorite writers ever.

I mean, Nausea and The Stranger are obviously on my list. The Stranger was a book that I read before any problems. I think I read it in eighth grade, but I’ve loved that book since I was a kid. I still read it every once in awhile just to touch up on it.

SRE: Flip side of the coin: Any books you hate? Any writers you can’t stand?

NP: You don’t have to read when you have some freedom. So if I don’t like something now that I’m out, I’ll just stop reading it now. But I’ve gone through full books – a lot of your commercial novels, stuff like that. Your Stephen Kings. I mean, I like some Stephen King stuff, but it mostly just bores me.

Hemmingway, he’s honestly one of the ones I can’t even get into. I’m not a fan of any of those guys from that era. You know, everyone tripped so hard about Gatsby, but I just argued with everyone – I fucking hated those people. Those entitled rich kids, I don’t want to read about that.

I also hate Ayn Rand. I hope I don’t sound chauvinistic, but a lot of female writers bring love into things too much. And it’s because the female species is a more loving creature than men are which is a good thing. But I like writing that’s a little bit more raw, and that doesn’t happen enough when I read female writers.

SRE: Can you talk a bit about how these books impacted your lyrics? There’s a brilliant simplicity to your words and I wondered about the connection.

NP: That’s always been my favorite part of writing music. But I struggle with it. I’m constantly torn on writing – it’s so hard for me to decide on a lyric and put it onto a track and walk away from it. I’m constantly looking over my shoulder wanting to correct something. It’s always hard for me. It’s the part I love and hate the most. I guess that’s where I overlap with them.

SRE: Do you usually get a whole song in one swoop?

NP: Most of what I have is scribbled in notebooks or in notes on my phone. It’ll be four or eight sentences that I wrote, and then I’ll pull from that. Sometimes, I just write something big and break it up into a song.

Right now, I’m trying to be more like a normal person and not be as crazed as I am with crazy pieces of paper everywhere. I’m trying to put everything into a file or something. People are trying to help me get more organized, but I’m kind of hopeless.

SRE: I’m sure you’re not hopeless.

NP: I don’t know about that. Writing lyrics is like creating a metal sculpture before finding out how big the space is that you’re going to install it. Sometimes the finished product is ok, though.

SRE: When you listen to Guilty of Everything, do you find lyrics you want to change again?

NP: I try not to even read it. I can’t even look at it on paper. I act like it doesn’t exist. I mean, obviously there are lines I like, but if I look at an overall piece, I’m never going to be happy with it.

SRE: Were you always writing?

NP: Yeah, it came hand in hand with making music. I grew up in a family of readers and writers and artists, also a family of criminals and drug addicts and maniacs. So the writing was always there just waiting to come out in some way or form.

Right now, I’m trying to get together a book of some collected works. But I can’t even give you an estimated time on when I’d be done with that.

SRE: You have a piece coming in a collection – Isolated Incident. What’s your piece in that?

NP: It’s a short poem that I had in my phone. I was going to try to write some new stuff for it, but it got so late that I just grabbed that piece and gave them that. But it’s one that I still like.

SRE: Nice. Looking forward to reading that. Before we wrap up, do you want to see this interview before it goes up?

NP: I don’t really care. But thank you very much.