A Review of Lydia Millet’s Magnificence 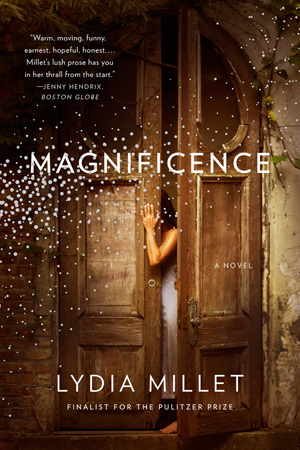 We’re in the thick of the sixth massive species extinction in the earth’s history, a human-made emergency. Keeping this dire truth close at hand more than most literary fiction writers, Lydia Millet writes environmental dread/catastrophe aptly and fluidly into her fiction. Her trilogy of novels which concludes with Magnificence (the first two are How the Dead Dream and Ghost Lights) is acerbic and funny about being decently human in the dying, precious world.

Magnificence is made around ideas of killing and being killed. Susan Lindley, who works for an environmentalist philanthropist, finds out that her husband was murdered on a trip to Central America. It’s funny and tension-inflicting how this sarcastic, thoughtful, and, at her depths, gentle person refers to herself in the third person as “the murderer” because of her guilt: she tells how her “sluttery” (and that she got caught cheating) drove the husband to go on a sudden trip.

Near the book’s midway point, Susan abruptly inherits her eccentric great-uncle’s Pasadena mansion (i.e. the condition of being alive means crazy-wonderful events can happen precipitously, and they can momentarily feel like balm on a wound). Every room of Susan’s gigantic new home is garishly filled with hundreds of stuffed animals that the old man had hunted: bears, elk, ocelots, armadillos, ducks. It’s an amazing animal parade that, in light of Susan’s environmental work, is brutally sad. But the surreality of living in a house surrounded by taxidermied prey isn’t grotesque to Susan. It gives her a feeling of wonder and peace and makes her reflect. “She’d done her own killing in the passage of daily life…in the end all the sins seemed the same to her, just softer and harder forms of the same murder,” Millet writes.

This writer’s works satirically, philosophically, and seemingly effortlessly around the hanger of the plot. It’s a treat when she sets Susan’s perceptions about our culture into the past tense and these sentences read like bizarre little extracts of an anthropological record from the future: “Women were….famous for hormonal madness,” Susan’s thoughts go; “oddly the chronic insanity of men was often referred to as stability; the men, being permanent sociopaths, got credit for consistency. Whereas the women, being mere part-time neurotics, were typecast as flighty.”

Magnificence ends with Susan’s discovery of what’s hidden in her new home’s labyrinthine cellar.  The flavor of this section is apocalypse eco-calypse Nancy Drew while Millet performs a neat pair of plot gear-shifts, punctuative surprises like the final moments of a fireworks show. The book’s final pages are controlled, rueful, lavish, and full of beauty and unsuspected celebration.

Stacey Levine is the author of four books of fiction: My Horse, DRA-, Frances Johnson, and The Girl with Brown Fur. Levine received a Stranger Genius Award in Literature in 2009.