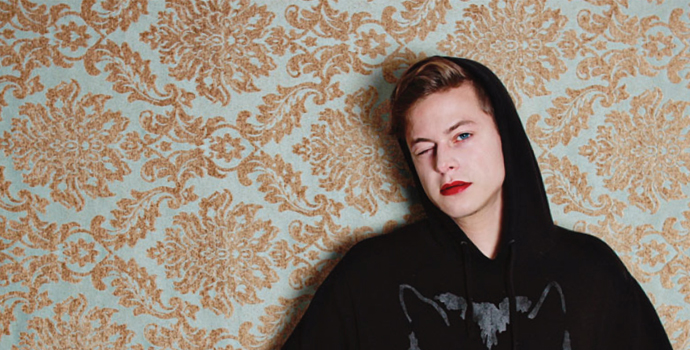 Perfume Genius: Put Your Back N 2 It

The sharp breaths of hyperventilation, which always seem to leap from a place far more cavernous and mysterious than the ribcage. The sudden recollection of that Joy Division cassette, a gift that came with a confession––of feeling somewhat empty.

In his debut album as Perfume Genius, Mike Hadreas recalls how those gasps for air and that cassette foreshadowed the abuse, addiction, and suicide to come––what he’d contemplate after returning to New York, checking himself into rehab and then staying with his mother in Seattle. Learning plays out like a years-old attempt at a suicide note, left alone without any mind to how it was stowed away. Its songs are addressed to people like Mr. Petersen, the high school teacher who wrote notes to Hadreas, gave him that Joy Division tape, and then jumped off a building. Learning‘s first few notes are of his left wrist wobbling back and forth as his fingers repeat the same two notes, seemingly uncertain footing after years of not touching a piano. Throughout, Hadreas steadies his confessions with these simple piano melodies. He even manages to bid Mr. Petersen farewell: “I hope there’s room for you up above / or down below.”

But in the live performances that followed, critics watched closely to see how a debut fully immersed in Hadreas’ past would play out in the present. They watched him sit next to Alan Wyffels, touring vocalist and pianist and “friend.” And they noted how tense Hadreas’ sinewy body was, how pained he appeared to relive the memories behind his songs yet again.

In his sophomore effort Put Your Back N 2 It, Hadreas steps forward more triumphantly––not just for himself, but for everyone else who’s felt as cowardly and ugly as he has. Put Your Back insists that there’s grace in gay sex, and that his love, boiled down to its essence, is no different from anyone else’s love. It’s an album that shouldn’t have to exist. However, last month Google and YouTube rejected Matador’s 16-second advertisement for Put Your Back––a still of Hadreas in embrace with gay porn star Arpad Miklos, a stance quite similar to Lana Del Rey’s in the preview for her “Born to Die” music video––because it was “non family safe.” This stigma is why Put Your Back exists.

Instead of focusing on specific mementos in his own life, Hadreas is obsessed with physical gestures and the ways in which they can both encourage and destroy a psyche. He wants you to take his hand, is offering to hold your hand, asking to put your back into it, willing himself to take the dark part of your heart. (And yes, that last sentiment would sound silly coming from anyone else, from someone who didn’t sound as if he was in such a hurry to do so, his hands racing over the ivory keys and his breathing sustained and even.) The harrowing “17” listlessly offers his “snarled, weird face,” and then as drums detonate in the distance and faint howling gets swept up in an unsettling fog, Hadreas shivers as he instructs what to do with the rest of his body. “String it up on a fence, cover it with semen,” he sings. “I am done, I am done, I am done with it.”

Hadreas is now singing in a proper studio, though aside from that, his approach to music hasn’t changed––it’s only executed with increased confidence. Barren piano lines still encourage Hadreas to keep singing, only now at times a bit quicker and a bit more forcefully, but sometimes, it’s more enlightening to hear how his voice carries on on its own, through Hadreas’ own will. In the middle of it all, after setting an Edna St. Vincent Millay poem to slowly shifting chords––”Dirge,” only now with music––he sighs, as if relaying her sentiment to his brain, repeating, “And I will not resign.” Then, in the otherwise gentle acoustic guitar waltz “Normal Song,” Hadreas’ voice flares up in disgust in the middle of a reassurance: “No secret, no matter how nasty / can poison your voice.” It’s as if he’s mimicking the ways in which other people have mocked him––recalling how they used to call him “nasty” and precisely how it sounded, too.

Hadreas named his sophomore effort with the crass, 1999 Ice Cube hit in mind. “I wanted to reinterpret ‘Put Your Back Into It’ as something more tender,” he told British GQ. “I like the ambiguity that people can interpret the name either to be nasty or sexual or to mean putting effort into something.” It’s a strange exercise, to compare Put Your Back to the song its name parodies. Even when it’s censored, Ice Cube’s “You Can Do It” is far more visceral and aggressive, the word “ass” bleeped out with the crack of a whip and then a female moan. But in between each chorus, Ice Cube is barking out the reasons why he wants that ass so badly, among them, “Life ain’t a track meet (no), it’s a marathon / fuck the cemetery that the nigga got buried on.” Hadreas is demanding for the same sort of legitimized existence; the album’s liner notes reveal that Hadreas used to make Wyffels sing the tender title track with him, before he even knew Hadreas wrote it for him. But the album’s most commanding note is in “All Waters,” at the end of a singular, sadly hypothetical moment drawn out over two minutes, ten seconds. “… when I can take your hand on crowded street / and hold you close to me / without hesitating,” he howls.

Put Your Back N 2 It shouldn’t have to exist. A man embracing another man isn’t an image that should be shielded from children. Hadreas should not hesitate to hold his boyfriend’s hand in public. But it does, and YouTube says it is, so he will. Hadreas now sings of ugliness as if it’s his civic duty, and no matter how close that voice comes to breaking at moments, he redeems himself with grace––beauty.

Put Your Back N 2 It is available from Matador Records.