People, Shut Up: An Interview with Ravi Mangla 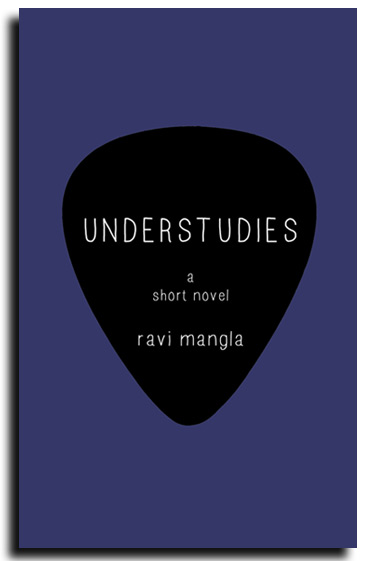 Ravi Mangla wants you, and everyone else, to shut the fuck up. It’s true. He told me so. We got really drunk one night in a bar just outside of Buffalo and we were a few beers and several shots deep and Ravi leaned in and said: “People….” And he held close for a stretch, he held on to that word, he squeezed the back of my neck really hard, and then he leaned back and a big smile split his face wide open. He shrugged, electric: “Shut up.” Then he staggered out and left me to deal with the bar tab.

That’s all a lie. I have never met Ravi Mangla in person. I have only seen pictures of him on the internet. As the former series editor for the Wigleaf Top 50 (Very) Short Fictions and the creator of explosive micros such as Retention and Happy Ending Sundae, Ravi’s made it crystal clear that he likes to keep things tight. His debut novel Understudies is an exemplary case in point.

Ravi opened up recently to talk about his novel, the literary device known as “appellative diminution,” and his sometimes predilection for jorts.

FANZINE: In your novel there’s a famous actress who’s trying to shed some of the limelight and re-acclimate, as it were, to civilian life. She moves into her grandmother’s old house which happens to be in the narrator’s neighborhood.  You never give the actress a name. Come to think of it, you never give the narrator a name either. You just call the actress “the actress.” I like that. Was it your initial intention to withhold names and if yes, to what end? Is there a literary term for that?

RAVI MANGLA: There’s no term for it as far as I know. I’ll make one up: appellative diminution.

It was definitely my intention to withhold the name of the actress. I wanted to keep her at arm’s length, enshrouded in mystery. The decision to keep the narrator unnamed was made in the moment. I was hoping it would achieve the opposite effect, allowing the reader to inhabit the character more easily.

FZ: Your narrator comes off as charmingly deadpan. He also plays in a band. Did you ever play in a band? What music fires you up?

RM: I play guitar and piano. I don’t play in a band. I wish I played in a band. Maybe I should start a band.

Listening to Anna Calvi fires me up.

FZ: There are some very touching moments in your novel, and one such moment centers on the importance of human acknowledgement, a tip of the cap to lessen the pain of living. Heavy shit, Mangla, and the form of your novel, the short bursts, helps to drives home these truth spikes with just as much vigor as would a more formally stretched novel.  Talk a little about short form versus long(er) form. Is there anything short form can’t do?

RM: It’s difficult for a short novel to simulate the immersive experience that comes with reading a 900-page juggernaut, but for me—as a reader and writer—economy is king. The epic is way overvalued in this country. Too often they win over the reader by sheer persistence. (There should be a pull string attached to every 500+ page book that says “Learn to love me, motherfucker. Because you’re stuck with me.”) The fact that I could read five books by Toussaint or Aira in the time it takes to get through The Art of Fielding makes me not want to read The Art of Fielding. I admire books with no fat or filler, that seek to distill their message to its most essential essence, and that’s an exceedingly rare quality in a large novel.

FZ: From root to fruit, how long did it take you to complete UNDERSTUDIES?

RM: Six-ish months. The book grew out of a short story called “Starlet” I wrote a year earlier. After a few disappointing rejections, I asked Scott Garson for some notes and he suggested expanding it into a novel.

FZ: There’s a scene in your novel where the narrator parties with his students. Did you ever party with your teachers in high school or college?

RM: God, I wish I had one of those stories. I saw my history teacher at the mall once. Does that count?

FZ: You live in upstate New York. How do you like it up there? How is the writing scene? How is Brian Mihok? You should visit him.

RM: Brian published one of my stories in matchbook, though we’ve never crossed paths in person. He lives in Buffalo, right? I don’t get out of the city very often—Rochester, that is. Born and raised here, likely to rot here. I’m not involved in the writing scene, though I do like talking up our literary history. Shocking number of great writers from these parts. John Ashbery and Cornelius Eady were born here. Shirley Jackson and Nicholson Baker grew up here. George Saunders and Andrea Barrett were living here when they wrote their first books. Joanna Scott and David Schickler live here currently. Not bad for a mid-size, economically-depressed city.

FZ: While reading your novel I sometimes felt like it was built perfectly for the big screen. The short, tight scenes, the witty banter, the excessive intake of drugs and alcohol—if UNDERSTUDIES were made into a movie, which actors do you see playing some of your characters?

RM: The narrator is played by Shia LaBeouf. Missy is Blake Lively. Palover is Randy Quaid. The mother is Angela Bassett. Chudley is Mr. Bean.

FZ: Do you smoke drugs when you write? How about when you edit? Which do you enjoy most: the writing or the editing or the smoking of drugs?

RM: No present drug intake. I haven’t smoked pot in over a year. And I don’t recall ever doing it while writing.

FZ: How about pizza?

FZ: Do we all die alone?