Paring Away At That Apple: An Interview with Kate Wyer 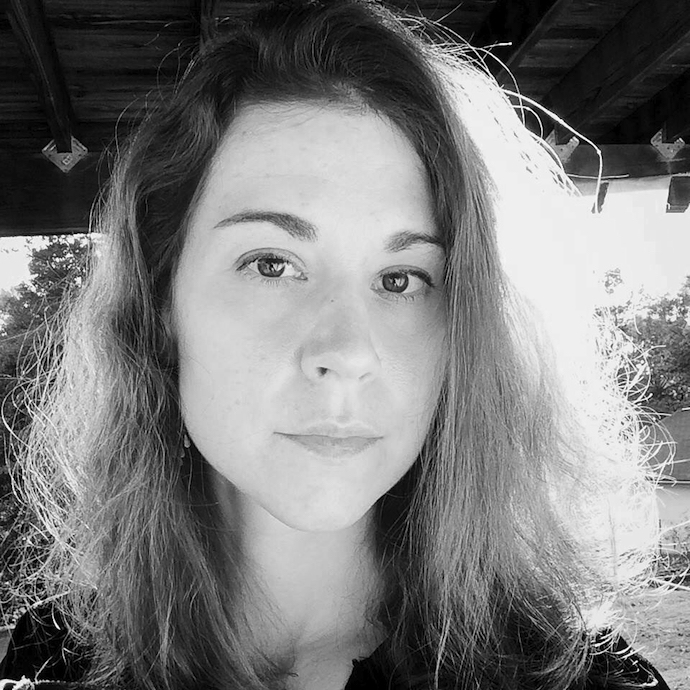 I first encountered Kate Wyer’s fiction in an online Peter Markus writing workshop we took together a few years back. When it came round to her submission – a manuscript extract about a girl and a cow on the run – we were all stunned. It was the kind of next level writing that demands the reader leans in and inhabits each word and its surrounding silence purely. It was starkly unshowy, but oozing with heart and quiet finesse.

When the workshop finished and we all disappeared into our other browser windows, I felt compelled to track down more of her writing. I discovered that she’d written two novels – Black Krim (2014) and Land Beast (2015). These, as I’d hoped, were as brilliant and odd as her workshop submission. Then I read some of her short stories and that she’d won prizes for her work. But that was it. There was a distinct and beautiful lack of myth and hype. How refreshing! With so much space available for answers, I wanted to ask Kate all kinds of questions about her work, vision, what spurs her on and how she filters the world. This interview took place via email.

What is your writing background? Your language make me think there could be poetry lurking somewhere … Were there any stand out books or authors that started it all for you?

You’re getting to the heart of a longstanding conflict/tension with that question. I started writing very young, like third grade. I would write stories, and I did write stories up through college. Many difficult things happened in college, and I stopped writing for several years. I eventually found my way into an MFA, and I wrote poetry during most of my time there. Poetry, especially in the unique program at The University of Baltimore, freed me up to create again. I wanted to pursue language in a condensed way. I wanted to see what was possible in an image. The class that really blew it up for me was called experimental forms. I was assigned Carson’s The Beauty of the Husband, and Ondaatje’s The Collected Works of Billy the Kid. Those works did contain a clear narrative drive, but it was pared down. All the tedious moving characters around in rooms was gone. Only the elemental was left. It showed me I could write the scenes I wanted to write, and forget about all the connecting stuff. I’m happiest when writing in a fragmented way, when I’m paring away at that apple and you see only the blade, the thumb and the flesh.

Your sentences read as carefully as recipes, and horticulture and cooking are hypnotically foregrounded in your novel Black Krim and short story The Pollinator. How does cooking – or alchemy – impact on your work?

Growing ugly tomatoes is holy; cooking is holy. Alchemy is absolutely essential. I find pleasure in transformation, especially in relation to plants. Black Krim was my way to give voice to those pleasures, to slow life down enough to observe the bizarre and fantastic things that have to occur for there to be life at all. Corbina has almost an ecstatic relationship to the natural world, very much in contrast to her relationship with the human one. I look to cultivate the alchemy, the magic. The Pollinator is part of a scrapped (for now?) novel that is much more purely alchemical.

Point of view is shuffled both visually and textually in Black Krim, alternating between Corbina, her mother Brigit and Martin. Your novel Land Beast tells the story of a wounded rhinoceros – from their first person/animal perspective. Can you talk about these choices? Are they rooted in compassion?

I am most drawn to writing in first person because I can fully immerse myself in that particular voice. I enjoy the challenge of imaging what life would be like as a different gender, or a different age, or even a different species. Land Beast’s voice is rooted in compassion, but also rage.  A lot of built up emotion surrounding violence and loss went into that story. Ultimately, I do want people to connect to the rhino in the same way they would to connect to a story about a human mother.

For Black Krim, I started with just two voices: Martin and Corbina. About two thirds of the way through, I realized it was just too claustrophobic and I needed another voice. Brigit, Corbina’s mother, was created then – as a way to allow a little bit of air and perspective into the story. I had a fear that people wouldn’t go along with Corbina’s decision to allow the strange old man to stay with her in her isolated farm house. Brigit informs the reader about Corbina’s early wounds, early disappointments. She’s mostly a contemptible person, but there is growth by the end. I never thought about these characters through the lens of compassion, but I see how it applies. I wanted them to be fully human in their neediness, in their blindness to their own motivations, and their grasping. So to bring it back, the choice for me is always about voice. I paid close attention to how long Martin’s sentences were, what his personal vocabulary was – all those verbal tics. In writing a novel that is three first person stories, I was very aware that I wanted each person to sound distinct.

Black Krim’s narrative unfurls very quietly through the book’s polyphony. Did any aspect of the writing process surprise you? Did you anticipate the ending/what happens to Martin?

I allowed Martin to surprise me. He’s my favorite character. I had fun writing him because he left all obligations behind and took a risk that played out well for him. So, when he fired the shotgun into the hall closet, that was just him being him. I didn’t know what was going to happen at the end when I started. I didn’t know why he left his family to walk into Corbina’s life. It all became inevitable. I didn’t know the book was really about Brigit and Corbina’s relationship – but Martin was the change agent that allowed that to come to light.

We’re both no strangers to the quintessential writer affliction: chronic insomnia. Are there any benefits for your work or is it something you strive to write against?

Unfortunately, it has zero benefits for my work. When I haven’t been sleeping, I can’t write. This upsets me, and then I wind myself into a bigger mess. I admire people who can use it, but I’m not one of them.

Have you read anything good recently?

The Hidden Life of Trees: What They Feel, How They Communicate by Peter Wohlleben has been fantastic. It’s a rare book that will transform your next walk in the woods.

I read Sorry to Disrupt the Peace by Patty Yumi Cottrell and was completely pulled in by the narrator and pacing. It’s gorgeously weird, deeply sad and incredibly funny.

Against Depression by Peter D. Kramer was published in 2005, but I found that it added a lot to my understanding of the changes that happen in the brain, and the body, due to depression. Anyone who thinks they can or should “just live with it” should read this and understand what a lack of treatment is actually doing to their future health.

Can you tell us about what you’re working on now? Is Girl, Cow going to be published anytime soon?

Thank you for asking about Girl, Cow. It was my first serious attempt at magical realism, or fabulism, and I found the process of writing it very rewarding. After the initial excitement of placing as a finalist for the Omnidawn Fabulist Fiction chapbook contest, I haven’t been able to find it a home yet. It’s currently pending at a few presses. I’m at work on a new novel about a woman who regains hearing after being deafened in childhood.

Your Pushcart-nominated story Radio Ferry, Tern Mouth is derived from a sestina you wrote as one of Peter Markus’ workshop assignments. What else did you get out of his workshop? I’m intrigued by his influence, having recently read an interview with Ottessa Moshfegh where she said he mentored her when she was young.

I was introduced to Peter’s work in the magazine Unsaid. Being published by that magazine is like being initiated into a family of sorts – or maybe a cult – a cult of deeply committed, language-driven makers. So when I saw that Peter was teaching an online workshop, I jumped at the chance to work with him. He’s very direct about seeing and communicating the bones of a story – and then encouraging you to strip the language down until the bones gleam. It’s about musicality, a kind of sharpness, and a shaman’s commitment. My story Atlantic City (in Necessary Fiction) was also born in Peter’s class.