Our Prayers After The Fire : An Excerpt 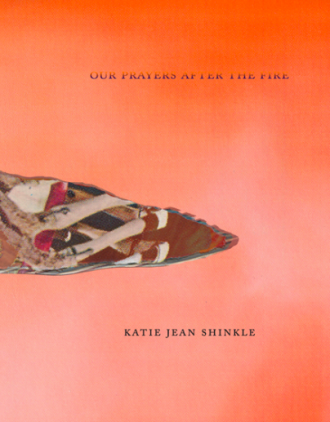 Matthew shows up to our house with a gun and calls Andi on his cell phone, says he is outside with a gun and that she should come out to talk to him and when Andi answers the phone she says no and locks every door and window in the house, makes us run to the bathroom where there are no windows. We lock the door to the bathroom and she brings the long-corded phone in with her, tells us to shut up, stay down, lie on the floor, and we do, our faces squished up against the tile.

She calls our Mother who happens to be playing euchre with her girlfriends and drunk in the middle of the afternoon and tells Mother that Matthew is outside in his car with a gun, tells her she must come home to talk to him because he has a gun insists they need to talk, she doesn’t know what to do and Mother tells her that she will be there soon and not to call the police but to stay in the bathroom, do not answer the phone.

Matthew calls the house phone repeatedly leaving messages on the answering machine about how he will use the gun on himself if no one in the house will come talk to him and that she needs to come out of the house immediately or else, and that this may be the last time they will talk to each other, and this is the last time, and that this gun can be used for other people, and if she doesn’t want that, she better come outside.

We stay huddled in the bathroom until our Mother arrives and when our Mother arrives we hear her screaming at Matthew. Andi tells us to stay in the bathroom and so we do but she leaves the door open and we can hear our Mother telling Matthew to leave or else she is going to call the police and Matthew can’t afford that because if she calls the police Matthew will be arrested and re-arrested and re-booked and re-warranted and he would go to jail again and did he want to go to jail again? Get the hell out of here, screw you and your gun, you idiot.

Aunt Louise finds a bullet in the living room when she is rummaging around trying to find a piece of important paper that had come in the mail and that she had thought she had left at their old house across town and that Marquise, before he left, swore was at our house, and she is searching high and low and Mother is also searching high and low before she leaves for her euchre game and instead of the piece of paper, Aunt Louise finds the bullet and immediately forgets about the piece of paper. Do you know about this?, she asks us and we shake our heads wildly as if to say of course we know about this are you kidding me and no of course we don’t, don’t ask us, we said we’d never tell.

Well? Fess up, she yells so our brother can hear down the hall. Fess. Up.

No one says a word. No one says a word all evening, into sunset, into dinner, into uninteresting and boring dinner talk, into homework, into showers and shaves and brushing teeth and reading quietly and television shows and talks on the phone and listening to the radio. No one says anything and when Aunt Louise is done playing cards with Mother, she never says a word, either. She goes to bed without telling anyone anything. She puts the bullet in the left pocket of her sweater and when she gets to her bedroom she pulls it out and places it on Marquise’s side of the long dresser they shared.

We know exactly. We know all about that bullet.

Matthew had sent Andi that bullet in the mail, in a letter, weeks ago.

Our Prayers After The Fire is now available from Blue Square Press.