Memory As Story: A Review of Find Me 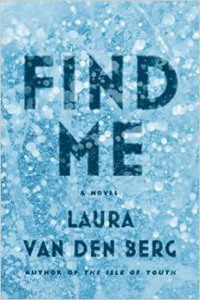 Let’s be ruthlessly reductive and say there are three kinds of post-apocalyptic novels:

Laura van den Berg’s debut novel, Find Me, takes that richly rewarding third path and finds a wealth of materials in the cracks that form in a world overrun by a terrible disease. In this unsettling world, humans lose memories before they lose their lives. The spaces between memory, myth, and mystery serve as springboards for the journey of our narrator, Joy Jones, an orphan who has always lingered on the troubled fringes. An outsider to begin with–as a baby she was left outside a Boston hospital by her birth mother–she sees things others don’t and possesses a sharp, clarifying sense of story.

Joy is a woman with no past, or no past she cares to claim. Her theory of surviving the sickness?

For the immune the flaws in our memory protected us. Take me. Already my mind had washed away what it could not stand to remember.

Unlike the people of the world who are losing inherited memories, family histories, long linked chains of identity – Joy is rooted only superficially in the world she inhabits. She lingers in the shadows, mostly – in abusive group homes, in short-lived foster care, in a dark basement apartment and the overnight shift at the Stop ‘n Stop grocery store. Even her name is not her real name, but a symmetrical pair of signifiers the nurses who found her as a baby have bestowed upon her. (“The symmetry of the name has never suited me,” she notes wryly.)

But of course everyone has a past and Joy, too, becomes determined to find hers, a mother in Florida she knows only from Wikipedia articles and online videos. The loss of the normal world and her time spent quarantined in a hospital with other miraculous survivors has meant the freedom to imagine a different future. For many inhabitants of a new, wrecked world–at the hospital, or outside living off the land or off of others–this is a time of searching: for love, for family, for lost places, for answers, for a cure, for an end. For Joy, too, loss has meant the freedom to seek out, and to hope someone might be looking for her, too:

A flyer for a missing girl, taped to a concrete post, stopped me. From the date of birth, I knew I was around the same age. The girl even looked a little like me. She had been missing for six years, a span of time that made the flyer seem more like a memorial than a way to search. I stared at the number and imagine what it would be like to look at a flyer and recognize your own face, to realize you had once been someone else, that people were out there looking for you.

Van den Berg sets up this unsteady search by gracefully, delicately creating a world so close to our own that it’s almost rather a parallel universe than a fiction–a place where that one wrong turn, that one key decision or difference has rippled out and changed everything. Everything, of course, but the people, who are still recognizably, poignantly human. To her credit, van den Berg is more interested in the survivors than the landscape. She’s more interested in what the static of loss and waiting drives them to.

In her short stories and now in her novel, van den Berg writes with a keen eye for the unlikely detail, the historical fact or odd bit of trivia, for the odd facts and bits of experience and memory that add up to a person. Joy tells us she relies on lists for comfort, but of course these lists, seemingly random, serve to catalogue the whole of humanity and harness the old world for us; they to remind us of what has been lost, and what has survived. She is at pains to give us the full range of humanity on display, even here in the aftermath of horror:

The haircuts, the inmates’ vacation stories, the few pieces we’re given of their former lives: these are of course not complete histories, are in fact as arbitrary and easy to shuffle as a deck of cards, and Joy knows this. “What is a memory,” she asks, “but a telling of a story?”

I always find it impressive when a writer is sure-footed and self-aware enough to know the exact vehicle to best showcase their talents. Housed without spectacle or vanity, van den Berg’s strengths as a writer are all on display here. The way she builds a world from memories and fragments, where dark humor is a momentary relief from all the surrounding decay, where lonely women try to find some semblance of peace in a difficult place and the unquiet of the mind–the book is solid as a rock at its foundations and dazzling in its revelations due to just these singular literary gifts.

Of course by now it should be clear that this is not yet another post-apocalyptic book. That’s just the costume it wears. But really it’s very much a Laura van den Berg book: a lonely dark place strung up with lovely bits of hope like Christmas lights, soft and strangely out of place but never out of sight, not quite. Hope is the sweetest, toughest part of living here in these words. As Joy notes, “In the eyes of the patients, I detect a new kind of aliveness. An unspoken question spreads like a germ through the air: is it possible for me to leave, too?”