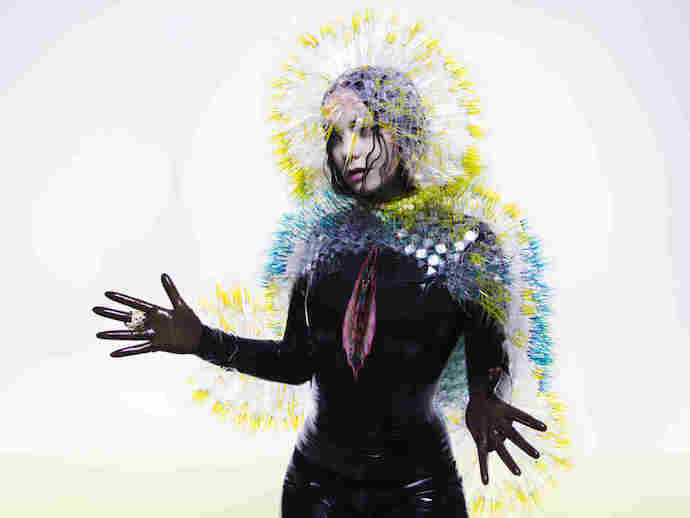 Heartbreak is many things. Two of those things, relevant to the new Bjork album, Vulnicura, are suffocation and complexity. Suffocation might seem the easier leap from heartbreak, the overwhelm of one applicable to the overwhelm of the other, but just as important is that heartbreak, while it may seem simple, never is simple. So, shelving suffocation for a while, let’s look at heartbreak: it’s a push/pull of grief, irrational optimism, flickers of delusional hope, and the considerable anxiety re: managing disparate emotions surging in you all at once. If you lose a person or a thing or a role in life, you may think you’ve lost one thing, but memories are memories and the unknown future is unknown, so you don’t entirely lose most of what you love. But you do lose a considerable amount of yourself, and are charged with discovering not just what’s left after heartbreak, but how to pull, from heartbreak’s complexity, something akin to acceptance and peace.

This is not just grief therapy hokum: it’s directly applicable to Vulnicura, because while the album may seem framed by suffocation–even literally in the defiantly open wound of “Black Lake”– Vulnicura is a masterclass in the complexity of heartbreak. Every track is another angle through which the shards of grief can be viewed, sometimes unbearably closely, sometimes scarily distantly. The news-story side of things doesn’t really matter here; the only key things to know is that the nine long tracks of the album are divided into three sections, three songs before a breakup with a husband/partner, when heartbreak is already setting in; three central songs completely lost to heartbreak after the breakup of a relationship; and three final songs that slowly emerge from heartbreak, soberly shaking free of heartbreak’s suffocation but moving forward knowing that although heartbreak’s complexity may never end, love is still real, and so is the future, so hope is not lost.

I’m getting some of this stuff out of the way in my earnest little quest, here, to grab you by the lapels and shake you and impel you to go procure Vulnicura as soon as you’re done reading this because following the fidgety Volta and the sluggish Biophilia, Bjork has produced what might be her best album. Yes, there are beats, menacing intermittent underpinning threading through the songs, but what Vulnicura really showcases is Bjork’s brilliance both as a vocalist and as a composer.

First, as a vocalist, while Bjork doesn’t necessarily debut anything here, the lengthy tracks and the space provided her by the strings allow her to curl her voice elaborately around the most deeply, uncomfortable lyrics she’s ever written, to treat overwhelming confessions with overwhelming song. In “Black Lake” she sings, “Did I love you too much?” and you’re not hearing something abstractly rhetorical; through the power of how Bjork pushes the words out of her throat here and elsewhere on the album there’s no avoiding that this question isn’t abstraction but confrontation. Bjork is confronting both her increasingly distant lover and herself; she’s singing as if she expects a damn good answer from both, singing as if no answer is probably forthcoming from either.

While sometimes the abstract lyrics on the few albums preceding this have leant Bjork a certain distance from her subjects, the direct lyrics here allow the emotive power of Bjork’s voice to wind tightly around every word. Every word matters; every word sung is a word that needs to be sung. When Antony guests on the beginning-of-recovery song “Atom Dance,” he doesn’t duet with her, and neither, mostly, does he sing along; his vocals arrive in waves, sometimes as a glitchy, multi-tracked singular entity, but often competing with Bjork’s vocals for breathing room and overlapping in a way that increases both the complexity and urgency of the song.

In most reviews of most Bjork albums from Debut to now, reviewers highlight the beats, and the men (always men) behind their craft, neglecting Bjork’s complete control over her music. The music Bjork has written and arranged mostly for a small string orchestra expertly provides a platform for her vocals. While strings on some of Bjork’s earlier albums, even sometimes Homogenic, seemed like a museum display of String Section, the strings here are slippery and breathless, surging and surging only to abruptly fall away. The nine songs aren’t all strings but the string section here is the spine around which Bjork can wrap the complexity of heartbreak, switching back and forth between stasis and restlessness by swirling out of and back into silence.

Returning to suffocation, now, suffocation reaches a peak almost eight minutes into “Black Lake,” when Bjork’s singing and the beat both drop out, leaving only a dissonant chord held by the string section, and held, and held. The seeming stasis of bows seamlessly move back and forth across strings eventually crashing down and Bjork returns, more earnestly and more urgently to deliver you not just what she calls a “singer/songwriter” album, but a spectacularly beautiful, deeply upsetting (if you happen to be heartbroken yourself) and ultimately meticulously, reductively clear meditation on heartbreak, on grief, on where it leads you and what it does to you and how you can, with effort, eventually slip free.