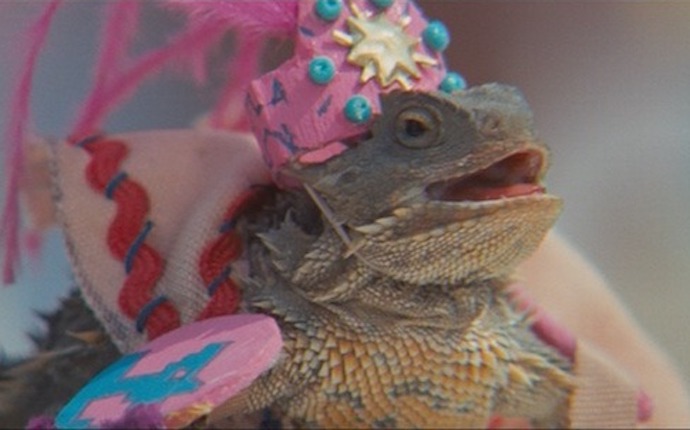 Jodorowsky with his arms splayed and a body made from oak and blood flowing from each crack in the oak and the blood pooling on the stage and soaking into the curtains and he is watched by a figure with two heads sprouting from the same torso. Manoman watches Jodorowsky and Jodorowsky says, “I am kneeling in the church of Mallarme and I experience the separation of my body from my essence. My body becomes a basin and my essence inhabits the oak tree which I have now carved into a new vessel. All of this. I am still Jodorowsky.”

Manoman behaves as two, but they are not sure if they are two or one. Their tongues have been cut out and they begin having dreams of three campers outside of Antwerp. They attempt to interpret the dreams but each time they confront the campers the sky turns lavender and the dream ends. Jodorowsky summons the spirit of Carl Jung and together they perform a ritual to extract the dream from Manoman’s heads. Manoman isn’t sure which one the dream is stored in so the ritual is performed twice.

[ritual text] “Deep pools of viscous water—Artifacts taken from liminal space—A meeting outside Antwerp—Tall alleyways in central Zurich—You feel yourself being turned inside out—I cannot place myself in time—We roll through duration—Two emails arrive from different sources outlining the same prophetic sighting—Messianic screams—French symbolists gathering outside the church of a desert village—Carl Jung meditating in the Anthem Hotel—Three figures lingering in the outskirts—You receive an unmarked package—Dream opens across the surface.”

Jodorowsky questions whether he is a performer or a performance. In this new vessel he questions the amount of control that he has over his own actions. The oak body begins to resemble the memory of villages which have surfaced in the desert. Jodorowsky carves analytical instruments out of his torso and brings them into the memory so that he might determine whether it is real or fake.

Manoman says that the dream has not gone away, but instead has lengthened. Now when they approach the campers, one of them says, “construct the ibismachine,” which Manoman does not know how to interpret. The sky is still turning lavender. The campers are still outside of Antwerp.

In the church of Holderlin there is a two headed something dictating what they can remember of their Antwerp dream. Manoman assumes the mythological position of the speaker and dictates his own dream. The ghost of Mallarme rises out of floorboards and the iconography of Holderlin is mutated in his likeness. Jodorowsky continues to pray to Holderlin. Manoman revisits his dream in search of the schematics for an ibismachine. Manoman tries to ask the campers what an ibismachine is but the sky is turning lavender and he has to go.

Someone says that they want to go home. Villages continue to surface in the desert. Carl Jung dissipates back into the aether. The church of Holderlin/Mallarme metamorphosizes. The artist questions his and their own ontology.

Manoman dreams for five days straight and learns that he must return to the mystic theater if he is to build the ibismachine. Jodorowsky follows him out of the desert and they both return to the stage and they see that all of the blood has dried and died the floorboards rust brown.

An ibismachine is a machine that allows someone to resemble the avian shape of an ibis. It’s components are extracted from the nile and give the extractor the capabilities needed to summon whomever they have found themself a follower of. Manoman flies from Marseilles to Khartoum and finds the ibis-frames that they were told to find. They extract the bones and viscera from the frames and construct the ibismachine.

The campers outside of Antwerp die mysteriously and when Manoman returns the police ask him why he’s there and what he’s been up to in the previous couple of hours. Manoman says that he’s been away from his dreams because he is losing his capacity for sleep. The police tell him that he has to go and then the sky turns lavender and his consciousness resurfaces in the mystic theater.

Manoman does not know who they are a follower of so they rev the ibismachine and wait for it to tell them. The sky turns lavender again outside of Antwerp and Roberto Bolano is resurrected. Flesh crawls into the crevasses of the skeletal frame and a ritual is performed and Bolano does not know where he is and Manoman does not know who Bolano is and begins to question the intentions of the ibismachine and Jodorowsky does not notice the ritual because he is on his knees trying to scrub the dried blood from the floorboards.

[ritual text] “There are reasonable people and unreasonable people—Alley of larches—100 women die in a series of unconnected murders—The fronde—The landscape changing over three biomes—You realize that you live in a high desert—Two poets crash against a dune in the Sonora desert—Belano changes his name to Bolano—a technician taps into the local magic—Three academics fly from Madrid to Marseilles to Cairo—Rimbaud mutates—You ask a clergymen what’s happening to your gut and he doesn’t know—They suspected me from the start—The sky turns lavender—Bolano summoned by a cult of his followers—Mystic theater materialized in the shadow of 100 deaths again.”

Bolano rearranges himself and takes on the appearance of a bird. New followers arrive in the theater and paint murals of the new Bird-Superior. Bolano grows new limbs sprout from his floating ribs and the bones of these limbs mutate and the skin grows feathers instead of hair and Bolano continues to resemble a bird and when he first addresses his new followers he tells them that he is not Roberto Bolano. He sees that he no longer recognizes the form he used to inhabit. The vessel remains but it has changed over time. Maybe by lack of light or by lack of cellular activity. He has not dilapidated as houses do. He is organismal and thriving.

Mystic theater cannot rid itself of blood. Jodorowsky gives up. The new Bird-Superior suffers from dreams about Chile, Antwerp, and the outskirts of Mexico City. He travels to a small town. There are no police stations. A scene of squares plays out. Jodorowsky attempts to incorporate the analytical instruments back into his frame and it works and now he feels less fragile and weak.

Jodorowsky becomes the performance of assembling an unrecognizable metal contraption. He strips the infrastructure of the theater and creates a new object. The theater is replaced with substance. The ibismachine evaporates into a flock of birds.

Jodorowsky becomes the image of substance and feels new motives surfacing within himself and flies to the outskirts of Antwerp and there is no one there and he returns to an illuminated apartment where he knocks on the door and an avian figure answers and he bows before the figure who does not recognize him.

Bolano’s Bird-Superior rests under the lavender sky and when the stranger arrives at his door, he is broken down like a deer and the holy parts of his body are extracted and returned to the theater. His blood is jarred and brought to an empty fountain where it fills the reservoir and where Jodorowsky bathes and refills the pores of his wooden frame. Jodorowsky bleeds infinitely into the theater’s floorboards.

Manoman attempts to tear themself in half and become two separate entities. Their tongues regrow. The sky changes hue. The landscape changes shape. Jodorowsky begins his pilgrimage. Manoman begins the performance of talking to themself alone in a void of things.

Mike Corrao is the author of Man, Oh Man (Orson’s Publishing, 2018) and Gut Text (11:11 Press, 2019). His work has been featured in publications such as Entropy, Always Crashing, and The Portland Review. He lives in Minneapolis where he earned his B.A. in film and English literature at the University of Minnesota. Learn more at www.mikecorrao.com