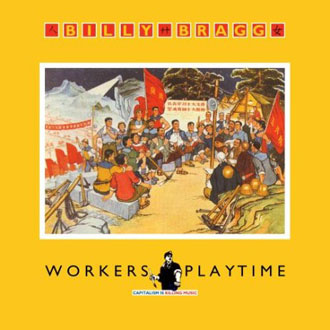 You’ve likely heard this put snidely…What are the list of demands of the Occupy Wall Street protesters? A quip usually followed by: Will Radiohead show up? Google it. I’ve imagined what would be the ideal amplified soundtrack if WSO weren’t so courteous and for the most part abiding by the rules (they even planted new mums in Zuccotti Park and cleaned the grounds themselves with brooms, mops and brushes when asked to leave for a suspicious pressure washing). My first thought wouldn’t have been Radiohead, but where is Fugazi? (it’s a been a helluva decade for you guys to disappear, P.E. too, though playing “Louder than a Bomb” near Ground Zero might still be a smidgen too much). While I can now hear youtube videos of school glee clubs singing “Waiting Room”, they’re not the same (but pretty good), I think of the less amplified protest songs that work; (no not Dylan or Springsteen but) the old fogey in me (I remember well the Tompkins Square occupation back in ‘91) puts on Billy Bragg’s Worker’s Playtime and strums along on acoustic to “Waiting for The Great Leap Forward” while feeding my baby breakfast and tinkering with his college fund on Ameritrade in between bites. Yeah fuck those banks, let’s triple short ETF-em today. A thought interrupted by Bragg singing: “You can be active with the activists or sleep in with the sleepers.” Maybe Anonymous is right, the 99% should pile into one big hedge fund and leverage the bastards into submission. Meanwhile taking to the streets has been successful, important, and I hope all’s not been weathered out when I get back to the Big A in November. Worker’s Playtime is old but it stands up. For an album mostly about the perils and pains of love, political doubt and hope has never been sung so intelligently as the LP’s closer. I’m sick of people calling this one awkward, what’s not? Revisit or discover, and pay attention to a poet’s words. You might even catch the “15 fame filled minutes of a Fanzine writer.” -Casey McKinney