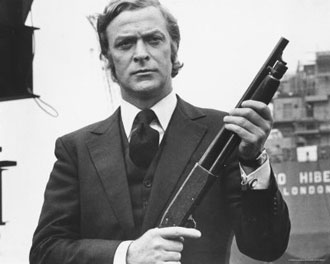 Michael Caine is everywhere these days, again. Though he never really goes anywhere. His voice just changes – according to the movie The Trip, in which a restaurant reviewer and his tourette’s-like voice imitating friend (favorites are James Bond, Woody Allen and Caine, mostly Caine) travel around North England trying to have a conversation while eating deliciously prepped meals. Yes it’s funny, way better than what was that called, oh yeah Sideways, which I guess is the obvious comparison. The Trip is now on iTunes, at your local vid store, and hey at Netflix for free. And speaking of Netflix, if you still have an account, know that Starz announced it was abandoning the company before you realized how many unwatched DVDs you had laying around and thought about cancelling your service when they hiked your fees and almost divided the service into two companies (two logins? fuck that shit!). Well if you’re as spaced out as me and didn’t send the DVDs back, you probably didn’t cancel either. If so, you’re in luck for a nanosecond (I think maybe the time has passed) – anyway Starz has had a lot of old classic Michael Caine up lately. So watch, quick…if you can. He’s the bomb. “The girl was only FIF-teen. Fifteen years old.” -CM