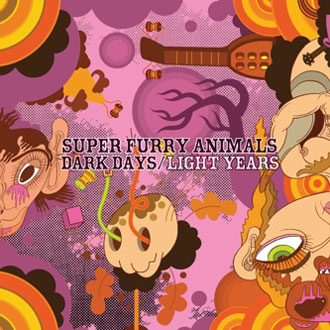 Welshmen Super Furry Animals never cease to delight. They first had me with an infectious ode to Bill Clinton and Monica Lewinsky in Rings Around The World‘s obscenely orchestral ‘Presidential Suite‘ to their disco, hedonist, nihilistic superjam ‘Juxtaposed with You.’ Their songs have always been topical, literary, and if they’re in Welsh, well they’ll always have some amazing director shooting footage for live shows to help along with the narrative trip. SFA’s made it through the Bush/Blair years, though not as loudly as peers like The Flaming Lips in the States; still they’ve never faltered. And now we’ve arrived at Dark Days/Light Years, the title of their April 21st release LP (um 2009, been in a baby time warp this year). The days may be dark, but the LP’s awake and chipper as SFA’s ever been (as on songs such as ‘Inaugural Trams). The LP’s opener, ‘Crazy Naked Girls’, could be a bombastic, drumtastic FIFA hit as Blur’s ‘Song #2’ was for the 2006 World Cup (or was it the Cup before? I think it was recycled twice) to a 10 minute Hendrixesque finale jam, ‘Pric.’ Highly recommended. -CM