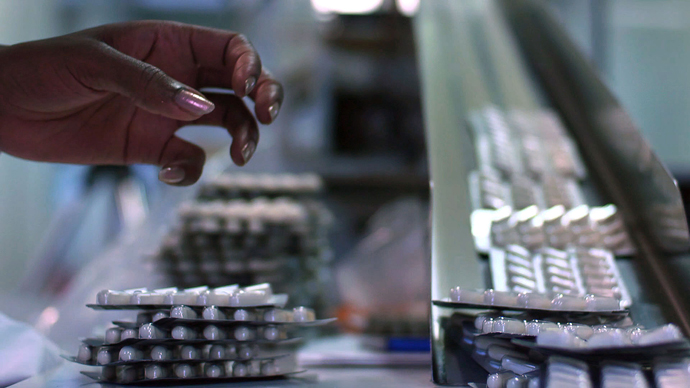 Michael Palmieri and Donal Mosher’s documentaries function as more than mere information delivery systems. 2009’s October Country sketched a family living on the brink of poverty in New York’s Mohawk Valley region, but it is most memorable for its striking, indefinably haunting photography, which rendered it more a mood piece or horror movie than simply another portrait doc. It wasn’t just aesthetics for aesthetics’ sake – artful shots of sparking fireworks and blood-red devil costumes in relief against black skies, scored to plaintive ambient music, effectively instilled a feeling of dread uncertainty particular to rural upstate New York, increasing viewer empathy.

The directing team’s new Off Label is similarly something more than an investigation into prescription drug addiction and Big Pharma corruption in the United States. The deft digital camera photography and attention to mood from October Country remain, and it is structured around character portraits – puzzle pieces that together show the big picture. With its sensitivity for composition and surface pleasures, it has the richness of good narrative cinema; a close cousin is Richard Linklater’s subversive and underrated Fast Food Nation, which also raised awareness of a current national health tragedy through the telling of individual stories. By making their look at the medicine business about the specific people it affects, Palmieri and Mosher are able to say something about both their topic and the larger humanity.

The filmmakers were inspired to make Off Label in part by a New Yorker article by Carl Elliott called “Guinea-Pigging”, about people who chronically submit to pharmaceutical product tests for pay. One of the subjects featured in Elliott’s article was Robert Helms, shown here in his sad one-bedroom apartment fretting that he’s almost too old to be considered for tests – his main income source. Like everyone else in the movie, Helms is simultaneously critical of the pill industry (he publishes investigative books and articles on the topic) and complicit in it. Testing has damaged his psyche, but he still credits the ADHD-treating drug Adderall for his ability to concentrate enough to study and write. A bit of an oddball, Helms at one point shows off a humane animal trap that he designed to catch cats or raccoons. He’s worried he’ll have to resort to killing his dinner once he’s deemed unfit for guinea-pigging.

Paul Clough is another subject for whom the clinical trials themselves have become their own kind of addiction. A deformed loner, Clough displays his numerous track marks and scars, the physical evidence of his lifelong test volunteering, and says that he feels lost when he’s not in a study. A gambler, Clough takes solo trips to the Vegas strip to risk his slim income. Shots of him wandering the Vegas streets and drinking alone in his hotel room, accompanied by reverb-heavy guitar on the soundtrack, are Off Label‘s most melancholy and lyrical.

Two subjects seek relief through religion. Jusef Anthony, a Muslim, needs it. In the 60s he was jailed for selling pot, and while at Pennsylvania’s Holmesburg Prison, he was subjected to multiple experiments by one Dr. Albert Kligman. Anthony was eventually released, and the program of inmate guinea-pigging shut down (Kligman, still alive, is advocating for its reinstatement), but he still has the gnarled, puffy fingers and a battery of other health woes to show for his time as a manipulated and lied-to patient. Paula Yarr is wife to the owner/operator of a Bigfoot museum in Santa Cruz, California. Bipolar, she seeks solace at her community church and through pills – she takes nearly twenty every day. Like the temporary fix of booze, the cure has superceded the initial problem, as Yarr has been hospitalized more than once for “poly-pharmacy”, or too many different drugs in the system. Yarr’s overmedication points to a problem noted here by former Pfizer rep Michael Oldani, that of unqualified (and often corrupt) primary care physicians rampantly prescribing powerful drugs. One result is that good psychiatrists are now in the business of detox, getting their patients off of the various drugs they should never have been on.

Off Label exposes the overmedication of war veterans through the story of Andrew Duffy. A former George W. Bush fan (he even looks like a Bush), Duffy enthusiastically enlisted, then ended up at Abu Ghraib, hydrating hunger-striking prisoners using a giant, menacing syringe – an oblique form of torture. Back home, the VA hospital unhelpfully threw anti-depressants and anti-anxiety pills at his serious PTSD. Even if a drug had been the answer, he might not have received the correct prescription because, he notes, if the government doesn’t have a contract with the drug company, they don’t provide it.

There are other poignant moments, including a punk wedding and a mother’s horrifying account of her mis-medicated son’s gory suicide. The impact of these and the rest of Off Label‘s collage of portraits hits you gradually and surreptitiously. Anecdotal, it never makes claims to being the “final word” on America’s pill problem, and it doesn’t attempt to offer the solution. The artistry of Palmieri and Mosher’s style is unique in modern documentary filmmaking, and here it does justice to the humanity of their subjects.