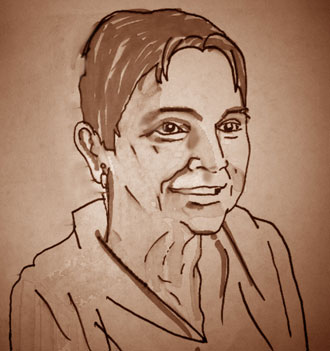 The facts about Adrienne Rich’s life are largely available: she was born the same year my maternal grandmother was, 1929, and W.H. Auden selected her first volume of poetry for the Yale Younger Poets Award in 1950. Rich went on to win numerous awards for her work, among them a Guggenheim and National Book Award, and she made her name as a writer who traversed many registers––but, most notably, she wrote from a place of deep political vision and (paradoxically) lack of it, in the sense that her work was nailed to the real of the social in a way that almost precludes vision, that allows it to lapse into pure feeling and caring. Rich wrote about the personal––her life as a lesbian mother, her insistence on a feminist ideality and reality, both matching, that allowed her to name her books as such: Of Woman Born; On Lies, Secrets and Silence; A Change of World; Necessities of life; and many others. There is something about Rich’s poetry that suggests confession, but she is not strictly a confessional poet––in her prose work Poetry and Commitment, written in 2006, she writes that Shelley, the fabulous Romantic he was, “did not say, ‘Poets are the unacknowledged interior decorators of the world’ “(8).

For Rich, poetry was always committed to the real of the social, and many of her poems evidence this commitment. While she often wrote of domestic experiences, she was always (much as the groundbreaking Objectivist poets before her) committed to invoke social truths in her work. Her work is not idiosyncratic or sentimental. Rich writes in the aforementioned piece of her sense of things:

I’m both a poet and one of the “everybodies” of my country. I live, in poetry and daily experience, with manipulated fear, ignorance, cultural confusion, and social antagonism huddling together on the fault line of an empire. In my lifetime I’ve seen the breakdown of rights and citizenship where ordinary “everybodies,” poets or not, have left politics to a political class bent on shoveling the elemental resources, the public commons of the entire world into private control. (15)

This deeply real poetry intertwined with a historical sense is what she will be remembered for having written. Rich was fiercely opposed to the aestheticizing of daily life, in the sense that Walter Benjamin invoked in his essay “The Work of Art in the Age of Mechanical Reproduction”: “‘Fiat ars––pereat mundus’, says Fascism, and, as Marinetti admits, expects war to supply the artistic gratification of a sense perception that has been changed by technology. This is evidently the consummation of ‘l’art pour l’art.’” Then how do we make sense of Rich’s work as an artist––and what is the differentiation of an artist from someone who works with words, speech––a poet?

One poetry critic, Charles Altieri, addresses this question in his book The Art of Twentieth-Century American Poetry: Modernism and After. For Altieri, both Robert Lowell and Adrienne Rich were poets who “offer surprising ways to personalize the new realism” (157), and he saw them as working in tandem, though offering different possibilities. Altieri writes of Rich:

In many respects Rich is Lowell’s opposite. He presents himself as awkwardly stumbling into truth and forging community by emphasizing the need for mutual pitch Rich, on the other hand, entered the public sphere precisely because she was fed up with the expectation that women would take the sympathetic role. She wrote public poetry out of a lucid and intense anger at injustice in the domains of gender, race, and class…. Therefore she writes a poetry engaged in the effort to change how we formulate desires and how we take responsibility for pursuing where those desires lead us…. (172)

Rich’s legacy is one of intense social need and pursuit of the workings of the desire within this need. For Rich, as Altieri writes, “dwelled on the possibility of projected identifications that enabled agents to use the full powers of ‘we’” (179). And this is what she leaves us: a sense of wanting to envision––while decrying vision’s control––a social way of living, whether it be as a woman in the world or as a domestic woman who is reaching out toward the world in order to live more fully.

However, she finds a way to nail her work to the real in a way that lets us imagine, while refusing what one might call the bourgeois imaginary––perhaps simply by marginalizing it. Rich leaves us with a wonderful body of work, and a career marked by integrity and passion. As she writes in “Scenes of Negotiation,” from Tonight No Poetry Will Serve: Poems 2007-2010, “No illusions at this table” (320). This poetry that decries the “fascinated eyes” that Rich later speaks of is a true gift to poets who will come later, and to those of us who write having known her as a living poet. I leave you with lines from “Powers of Recuperation,” the last poem in the aforementioned book:

Every built thing with its unmeant
meaning    unmet purpose