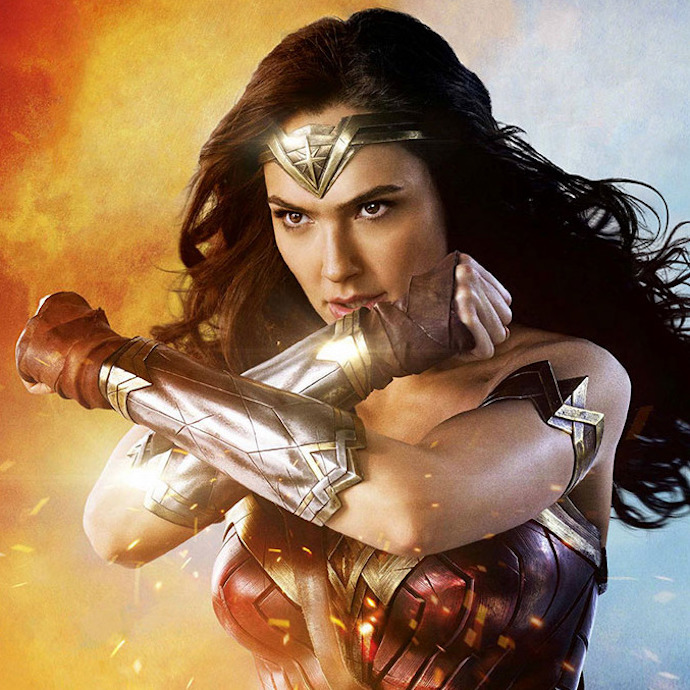 I don’t really like The Lord of the Rings Trilogy or any of The Hobbit films. (Like, they have successfully put me to sleep 3 out of 3 times). I don’t enjoy films where you can tell the actors had to spend a great deal of time learning to fake an accent. And I am not the biggest fan of fantasy-type stuff. (I like the idea more than the actualization). Wonder Woman (or at least the first 40 minutes) has all of the stuff that puts me to sleep. Call me biased, but the entire film just started off on the wrong (twisted & mangled & and full of bunions) foot (for me). But wait, something else first, & I can’t be alone here. My eyes & brain both are telling me Gal Gadot = Kim Kardashian West. Do you see it too (or am I just crazy)? I’m sorry. I had the same problem with Wonder Woman when she showed up (sorta unannounced) at the end of Batman v Superman: Dawn of Justice And I just can’t NOT see it. (Let it be known, I do not care for Kim Kardashian West, like, at all). But please, I don’t mean to take away from what I am trying to say here.

About the film. A few things. There’s way too much slow-motion bullshit happening. Way too much CGI stuff. (This is like the movie 300 x 800). The Amazon women accents did not jive with me. Things happen in a manner that is way too convenient (like a lot). The origin story was terrible (it really stunk). I love Wonder Woman to death but I’m sorry, this Wonder Woman is just not the Wonder Woman I know and have grown to love. I guess the way DC Comics is handling their superheroes just really rubs me the wrong way. It’s like they hired a bunch of art students who just graduated from CGI film school and said, “We know we can’t write a good story and our shit sucks anyway, so what we’re going to focus on is the CGI stuff,” and the young CGI film school grads don’t know any better (tho they know Marvel is totally the better studio) and they’ve all got to pay the rent anyhow and they also don’t want to lose their first real job so they’re all like, “Yeah!” and go on to create this mess of a movie.

I think I’m done watching anything DC for a while. I’ll keep watching Marvel, sure, (not that it’s THAT much better) but seriously, DC, for shame. I am sad about all this. A ton of things could have been done better but this is a by-the-numbers film. If you have ever read a book on script-writing, it sticks so close to the rules it’s pretty much devoid of any original idea (and why am I surprised? Zack Snyder is credited as partially responsible for the script). It’s these kinds of films you can never enjoy when you know and understand why they did what they did the way they did. Wonder Woman is not a film to be enjoyed. Wonder Woman is simply a launching pad for the DC Comics films franchise and it’s supposed to bring in $$$. Nothing more & nothing less. This film is a business plan for a major film studio that only sees $$$ and doesn’t care about long-term enjoyment. DC Comics right now: “We really need to catch up with Marvel.” And Marvel’s all like, “How much $$$ is too much money?” And Stan Lee is all like, “What? I can’t hear you. I’m on my way to the bank (again) (for the third time) (this hour).” Shit.

First 40 minutes of the film: absolute garbage. Once they get to London? YES! There’s humor. There’s real acting. It’s not all CGI. There’s real people actually being real people. It’s a very appropriate “what if” scenario. As-in, what if Wonder Woman were plucked from her Amazon island and transported to modern (in this case WWI) times? Honestly, I would have deleted the first 40 minutes of the film. Or, at least, done it completely differently. If there’s anything good about the first 40 minutes, it’s how good it makes the remaining 2 hours seem (though the final battle sequence is absolutely horrendous).

Film director Patty Jenkins was dealt a bad hand. The studio execs told her she had to make a ~142-minute film about Wonder Woman with at least 4 fight sequences, some romance, and a nearly 1-hr long sequence on an island full of Amazon women. This is hard. It’s like being given a bad group project but instead of throwing in the towel, you try and make something out of nothing. Don’t get me wrong, the acting is good. The characters (most of them) are somewhat believable. It’s just, Wonder Woman is actually a valiant attempt at something that would be hard to do, for any director. Wonder Woman is a supernatural being. That means her villains also need to be supernatural. Supernatural things tend to be CGI-heavy. This is regrettable but apparently, also, a necessary evil. So therein lies the inherent flaw in making Wonder Woman into a film. Which explains why older iterations of Wonder Woman have felt so underwhelming. It literally has been a situation where film producers have had to wait until the technology could become good enough to make a good enough Wonder Woman film. This is why I cannot rate Wonder Woman like I rate other films. Wonder Woman, for me, is untouchable. What needed to be done got done. This transcends the like-it-or-not ideal of rating films. Wonder Woman is not my favorite film (not by a long shot). I may never watch it again. But I am glad it exists. It has not set a precedent for superhero films at all, either. It doesn’t really do anything new; nothing I haven’t seen done before in any other superhero film that’s come out in the last 18 years.

Wonder Woman excels less in the technical aspects of what generally makes a film a good film and holds its own in the simple fact that someone was able to turn Wonder Woman into an actual film. Fucking round of applause for that. Seriously. After that, with all of the other schlock we have that people have the scruple to call “a film” these days, Wonder Woman ain’t so bad after all. But also, it’s not very good.