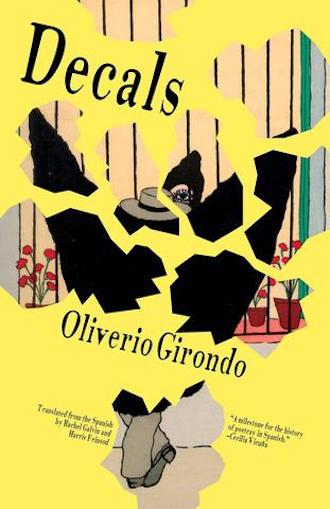 Oliverio Girondo was born in 1891, and he came of age as Buenos Aires, Argentina was becoming one of the great capitol cities of the world. He saw in real time the emergence of the modern world and Twenty Poems to be Read on a Streetcar was published in the watershed year of 1922. That important collection is included in a stunning new edition by Open Letter books. The poems are short, fleeting sketches of Buenos Aires, and Girondo’s travels abroad in Europe and Africa. The Decals of the collections title, and the second book Decalomania of 1925, refer to the stickers on steamer trunks, and call up the notion of world travel.

For Girondo, the sensations of modern life was exciting and alienating. This collection captures those classical tensions of modernity: the way that crowds are tantalizing, men are flash and vulgar, shop windows are dreamlike, and beaches inevitably evoke advertisements. His voice was galvanized by Martin Fierro, the acclaimed avant-garde magazine he ran between 1924 and 1927 with  Jorge Luis Borges. And while Borges has become the most famous Argentine modernist, Girondo was the grand Don of a certain kind of Argentine avant-gardism. He led his group of experimental poets and writers, the Avenida Florida group, through raucous discussions and parties. Centered in the most stony Buenos Aires shopping district, this was a buttoned up patrician wing of the early Buenos Aires vanguard, juxtaposed against the unruly Boedo group. The name Martin Fierro reflects Girondo’s playful attitude, evoking a mythical 19th Century gaucho, so prominent in the Argentine imagination around “National Literature,” but sort of humorless.

In an introduction to a 1986 Argentine Edition of Twenty Poems to be Read on a Streetcar, the Surrealist Aldo Pellegrini wrote about the way Girondo captured the freshness of what was possible in the early 20th century. He praised his enduring sense of humor, in his treatment of a poetics called truly revolutionary. And he later quotes a 1925 editorial that Girondo submitted to Martin Fierro, “The everyday is a manifestation, admirable and modest, of the absurd.” 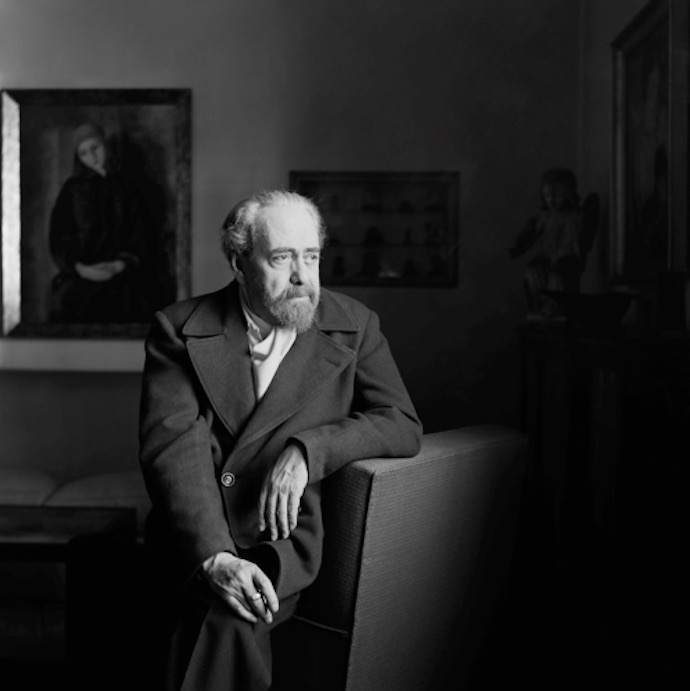 Oliverio Girondo in a photo by Baldomero Pestana, who instructed his subjects to smile “like they were telling a secret.”

The first book in the collection is called Twenty Poems to Be Read on a Streetcar, even though it might be named Meditations on an Emergency, or Devotions upon Emergent Occasions. And in a wacky take, the translators insist the title to be literally ironic, which is probably a bit of a stretch (who could carry such a thick book upon a streetcar?), but it’s at least a kind of joke. For whatever specific occasion, these are poems for the modern experience. Poems for the situation of a streetcar. Poems for the cafe or library. The Martin Fierro group was an exemplar of cafe society. The arcades on Avenida Florida, were comparable to those in any major city around the world. Girondo held court, and watched the beautiful bourgeois city pass before his eyes. And against this backdrop he wrote poems, a process he describes in a tongue in cheek letter to a cooking magazine, included at the beginning of this collection,

“And when you go down the stairs, you find rhythms, poems tossed in the middle of the street, poems you pick up like someone collecting cigarette butts along the sidewalk.”

His practice, which would become almost cliched in the world of modern poetry, is that of the stroll, the lunch poems, or commuter poems, where the incongruous modern world creates the appearance of surrealist juxtapositions. One of the interesting aspects of Girondo’s work has to do with the lasting allure of a relatively modest idea. As he walked through the city of Buenos Aires, and as he visited bars and cafes, he found poems springing up in his head. This process of tiny urban sketches, called in Argentina, “aguafuertes,” captures the heart of 20th century modernism: finding poetic narrative through the movement across incongruous spaces, this is Breton in Nadja, the heartbreaking Hopscotch through Cortazar’s Paris and imagined Buenos Aires, Rivette’s Paris as a game in Le Pont du Nord, and the eliding cartography of the Situationist drift. This is the simple reaction: I’m in the midst of something that’s incongruent, and fragmented, and beautiful, and one way of describing that is through language that is fragmented but strung together through a general constraint or project. Girondo was one of the first to really cement this practice, and the way the experiment became a lived ideal.

The best poems in the collection are sensual and evocative. In Ex-Voto, Girondo catches the scent of desperation across cross the middle class neighborhood of Flores, “The Flores girls live with the anxiety that their buttocks will go bad, like apples allowed to overripen, and men’s desire suffocates them so much that sometimes they want to shed it like a corset, since they lack the courage to cut their bodies into pieces and toss them to everyone who passes them on the sidewalk.”

In Another Nocture, he talks about nigh in Buenos Aires, the sultry city night, “The moon, like a clock’s luminous sphere on a public building./ Streetlamps sick with jaundice! Streetlamps in Apache caps, smoking cigarettes on the corners!/ Humble and humiliated song of urinals tired of singing! And the star’s silence above the damp asphalt./ Why, sometimes, do we become so interested in the ballgame our echoing footsteps play against the wall?”

It’s worth mentioning very briefly that one of the most discouraging legacies of the historical avant-garde has to do with the production of the myth around cosmopolitanism.

This has to do with what Benjamin describes in his Arcades project, as the essential expression of modernism; crowds, fashion, Baudelaire, Fourier, vaguely, the idea that there emerges a kind of ethic with so many different people living and working so close together.

And that’s probably true.  And yet, it’s been one hundred years of avant-garde reaction to orthodox language culture. And the tendency to conflate modernist avant-gardist practices and aesthetics, (cut-up, fragmentation, collage, constraint based experiment, etc,) with a lived progressive ethic, is not super accurate. The aesthetic does not produce an ethic in itself.

A lot of these romantic ideas around the avant-garde have to do with things like the Flaneur! the Barricades! Anarchist Barcelona! 1968 Paris! or the Downtown Scene in 1980s New York! and seem to be pretty innocuous at face value. They’re kind of corny, but harmless enough.

But it’s certain that a lot of violence goes unremarked in the name of art, the beautiful, and the cosmopolitan. As they say: Talk is cheap. And thinking is cheap.

If there is an ethic in the tradition of noticing our unbeautiful lives today, through the work of poetic language, it must have something to do acknowledging global supply chains. The ethic in the so-called “new sincerity,” for example to see, in the words of James Schuyler, “the world as too fierce, and not too much.” To look past the reflection, the sky in the puddle, the jet plane in the window of the high rise, to the sense that behind every renovated historical district is a line of luxury condominiums and hotels, and that this is not an exception but the current order.

There are places where the translators call up English idioms, there’s an irresistible nod to the borscht belt, “You’ve been boiling ’em but they’re friars.”

And there are other places where the queerness of the spoken “American Castillian,” more specifically, the Italian inflected Lunfardo and Rioplatense still shine through. A jeta is a face or “mug,” an ephebo is an “ephebe,” apparently a young military recruit.

The translators remark on Girondo’s worldview, bigoted by today’s standards, without wading too far into the conversation around the role the bourgeois idea of travel cemented certain prominent aesthetics in modernism.

Above all, the translation captures Girondo’s sensibility, that the hurly-burly, the commotion of the urban, the “spider webs woven by wires over rooftops,” all of this describes his excitement and sense of possibility.

The translators inform us that Girondo originally published Twenty Poems to be Read on a Streetcar in France in 1922, in an oversized edition including Girondo’s own watercolor illustrations.

It’s worth taking a look at the original illustrations beside the poems, because Girondo had broad interests in the visual arts. The paintings are ephemeral, and they call up the modernism of advertising, the fragments in the placard, the bulletin, of course, the decal. It’s also an obvious language of poster, the kind that still persists across Buenos Aires, in the nostalgic evocation of that era. The posters of Tortoni, or La Boca. And like the early Concretists, Vorticists, or Suprematists. you have textual and geometric imagery thats fragmented, influenced by the streams of mass media and distribution.

These fragments from 20th century Buenos Aires still shine with ardor, and weird light. Girondo’s humor adds to to their enduring legacy. And it’s an enormous privilege to finally read these foundational modernist poems in a definitive English edition.