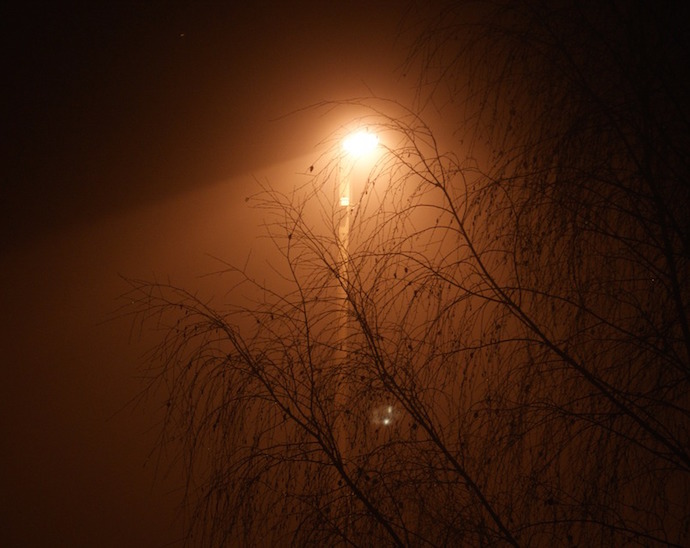 I went the park with my friend and she told me she wanted to kill herself. “I’m sick of it,” she said. “Nobody calls me back.”

It was a Tuesday night and the park was empty. The only light came from a few light poles emitting an alien, orange glow. We walked through a playground and sat on a bench that faced a field of grass. My friend rubbed her knees, which were bare like mine because we were both wearing shorts.

“People will call you back eventually,” I said. “Your sculptures are getting better all the time.”

“They’re getting bigger, not better. And I don’t have space for them. And nobody buys anything.”

We watched an old man with headphones walk across the field. I rubbed my legs. I wished I had remembered to put on bug spray.

She scratched her head. Flakes of stress-induced eczema flew off her skin and fell in the dirt.

“Alisha moved away, Max is selfish, Erin is busy and Coco says I’m too negative.”

We looked at the grass. A grimy dog ran by without a leash.

“I haven’t met your family,” I said, “but based on how much you talk about them, it’s clear they love you more than anything.” My friend looked straight ahead. I wondered if I was making things better or worse. “And you have your brother in Queens. He loves you.”

My friend shook her head.

We slapped the bugs that were crawling up our arms. The owner of the dog circled the lawn, looking at her phone.

I wanted to say something perfect and wise but the truth was that I thought she was right. There was no point.

A garbage truck stopped and groaned behind us. It was parked on the other side of the fence and its fumes were strong. It almost felt as though we were inside it, with banana peels in our ears and cigarette butts in our eyes. It groaned again and we turned. Two men leapt out of the truck and circled to the rear end. They wore thick gloves and picked up the overflowing bins of garbage with their mouths open.

“I should be a garbage man,” my friend said.

We turned back around and I scooted closer to my friend, ignoring the pile of dried bird shit stuck to the bench between us. I put my arm around her and we sat like that for a while, not saying anything.

She went home and she didn’t kill herself but I can’t say she was happy either. We talked the next day about the bugs that bit our legs.

“They’re all over my ankles,” I said.

I made a habit of scratching the bug bites until they bled. They formed ugly shells and when I was lying in bed at night, thinking about all the things that wrong with my life, I scratched them again. Eventually they formed scars, an ugly smattering of nicks around my shins. Whenever I saw my friend, l looked at her legs. She had the scars too.

Erica Peplin a writer from Detroit. She has been published by Hobart, The Brooklyn Rail and McSweeney’s. She lives in Brooklyn.