Is This The Most Hated Novel To Ever Win A Major Award? 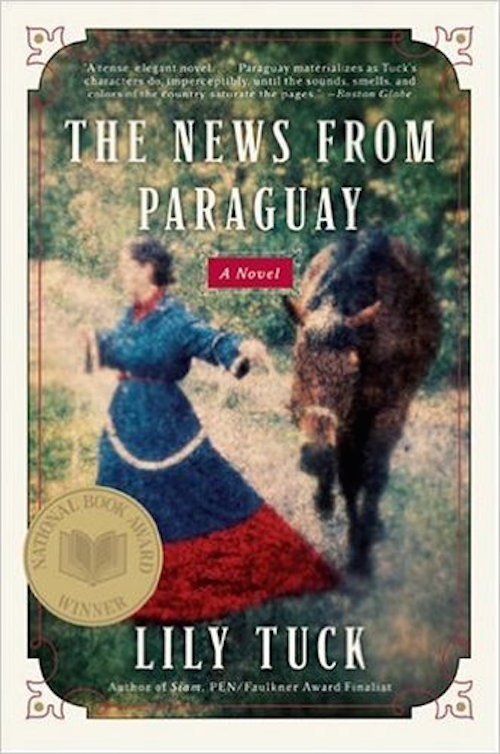 All five fiction books nominated for The National Book Award in 2004 were by women–Lily Tuck, Sarah Shun-lien Bynum, Christine Schutt, Joan Silber, and Kate Walbert–a first for any major literary award. Today, the sistren selection would be lionized, a middle finger rising from the spine of a hardcover book to the publishing patriarchy. But it was different in 2004: the novels and their creators were denounced, the books labeled as obscure and difficult, written by writers who were “New York City writers,” an insult I’ve never quite understood, like calling an overweight man a “pizza-style eater” or a basketball player a “fast dribbling kind of player.” Critics and readers wanted an explanation, so they began at the top, with the judges.

Rick Moody served as the chairman for fiction. Moody, an outspoken, “New York City writer,” had recently published three works of challenging and stylized fiction – Purple America, Demonology, and The Black Veil. Moody embodied an explosive nature, an energy and sentence length that seemed to run off into the ether, both in his work, and when he spoke. If anyone would dare to compile an idiosyncratic shortlist comprising difficult books, it would be Moody. He defended them, and most critics of the finalists selection remained unmoved.

The New York Times asked if the judges had been watching too much MTV because the books were brief and fragmented. Others complained that all but one of the novels had sold less than 2,000 copies, as if in this one instance popularity was a meaningful metric by which to assess literary fiction. It should come as no surprise that the winner, Lily Tuck’s The News from Paraguay, was swiftly anointed one of the most disliked novels amongst readers to ever win the award. It’s also one the most forgotten. But it never really had a chance.

Lily Tuck was born in 1938. She published her first novel, Interviewing Matisse or the Woman Who Died Standing Up,when she was 53. She lived abroad– Thailand, Uruguay, Peru, and the city she was born in, Paris–before moving to the States and writing fiction. But publication alluded her for most of her adult life. She spent seven years struggling, and failing, to publish a novel before attending the private classes of Gordon Lish, who at Knopf championed her first novel to publication before rejecting her second, The Woman Who Walked on Water, which went on to receive favorable reviews and extend her growing reputation. The critical praise continued when her third novel, Siam, was nominated for the 2000 PEN/Faulkner Award for Fiction. By the time The News from Paraguay was published in 2004, Tuck had earned a reputation as a unique storyteller largely focused at the sentence level who wrote short books with strange titles. To date, she’s written five novels, two short story collections, and a biography of the Italian novelist Elsa Morante. This September, she’ll publish her sixth novel, an autobiographical work of fiction titled The Double Life of Liliane.

A literary novel receiving negative attention from readers isn’t unusual, and they disliked Tuck’s The News from Paraguay from the beginning. However, award-winning novels are typically embraced by general readers (look at the past several years of the NBA, especially last year’s Redeployment). This makes The News from Paraguay unique. In the history of the NBA, for fiction, more than sixty novels, Tuck’s novel has, by far, the poorest reaction, not only among critics (rather mixed), but also with the readers. I spent an afternoon looking up each NBA winner on Goodreads and no other book dips below a 3.2 rating besides Tuck’s (3.0). Amazon yields a similarly deplorable result: sixteen 1-star reviews to three 5-star reviews for an average of 2.5 stars out of 5.0. The top review on Amazon is “How Did This Book Get Published?” and it appears clear that readers dislike Tuck’s novel more than any other NBA winner by a long shot.

So why does her novel receive so much hate? The reaction over the NBA selection in 2004 is the place to start, and some of the loud reaction to the 2004 shortlist lingered into public opinion. But it’s not the sole reason.

The News from Paraguay is a bloodied victim of a fussy, literary culture-war as well as dismissive Internet reviewing, but it is also, as a novel, guilty of pulling the rug from under the feet of the audience it attempts to lure in. It really is a strange little book.

For a historical novel, The News from Paraguay gives few factual details concerning Paraguay and does next to nothing to explain how or why the country is changing, what the novel is often described as. Tuck admitted, in her acceptance speech at the award ceremony, to never visiting the country, instead relying completely on her imagination. Readers felt deceived.

Last year I contacted Rick Moody about the 2004 National Book Award. It had been over ten years since the initial disapproval from the finalists he oversaw, and I was curious to see, how he felt, on reflection. I half-expected Moody wouldn’t respond, why revisit, but Moody has always been readily available when it comes to his opinions. His famed, “Genre is a bookstore problem, not a literary problem,” applies not only to his own work, but the work he extols. He replied to my initial email after twenty minutes, telling me that a majority of American readers are “fucking idiots” who simply didn’t understand the book. He said that a groundbreaking book like Tuck’s needs time to find its audience and all the loathing comes from people who would rather criticize it immediately than spend time trying to figure out what becomes a rewarding novel. This signifies another complication when discussing The News from Paraguay: Moody has a point.

The News from Paraguay, like much of Tuck’s work is challenging and frustrating because it slips conventions and deceives readers sold on jacket copy summaries. Paraguay, the more time I spent with it, can be sensual with moments of beauty. I believe it’s a novel that shouldn’t be forgotten or dismissed because it does so much to remain wholly as its own creation with no conventional audience, and because of this, I admire it. It’s also an exceptionally odd book, and one easily prone to fallible first-read Internet critique. There’s just something about it that makes people angry: it is a book that somehow won a major award, and is simultaneously forgotten and hated. More than ten years later, and abiding by Moody that the novel needed time to find its audience (a fairly standard among the post-modern is projecting into an unknown future where, alas, the work will be substantially praised) it’s fairly clear that The News from Paraguay will endure as the artistic pinnacle of Tuck’s career while concurrently displeasing readers.

The National Book Award host for the night in 2004 was Garrison Keillor, who told the audience and the finalists, Lily Tuck herself waiting to receive her award: “I assure you that awards are meaningless.” Classic Keillor – say something laced with truth in a deadpan acrid tone, receive uncomfortable laughter, proceed. But the joke, years later, contradicts its original intention. Winning the National Book Award wasn’t meaningless at all; it was meaningful in opening up Lily Tuck to more criticism than any other award winner before and since.