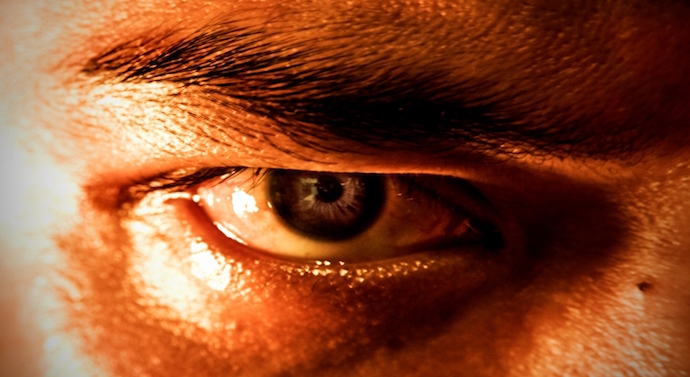 What if people fell into themselves? I don’t mean to restrict this query in any sense. Think of those falling into love and subsuming each other. It feels good—there is bliss. When we’re inside we’re there—darkening in the dark. But can we as happily live inside ourselves? How do we eat? What about sex? Can we talk to others?

It seems we fall into ourselves for some moments every day. No one else can be with us then and only a practiced phrenologist performing a tactful surveillance could tell there has been a change. We are the truth of our lives, and with or without Freud and Jung we carry this pledge like the child we can never lose. All that is is light and all that we are accrues until the heart cannot so much as murmur, experience being a delicious pain. Some of the time we are only us, completely capable of being solipsistic in everything we do. How easy and simple that no one else’s needs impose, though of course those needs still do. It’s easeful to know at base we are our own mystery—no one else can solve us but ourselves. Who said life was complicated? They must have been poking into other people’s mysteries instead of staying self-registered.

In Edward Yang’s film Yi Yi, a woman, who has gone to a retreat center after her mother has fallen into a coma and her husband into disregard, returns and tells her spouse, “I’ve come to realize things aren’t really so complicated. Why did they ever seem so?” Life may be simple but because of the agendas of many people around us, difficulties and emotional encounters dominate our time, whether shared or not.

And so we come to a new being made up of three unpleasantries—the internet junkie, the disgruntled commenter, and the unsuccessful writer. This new unsuccessful writer, whose life might be the most despairing of all, does want to write, but by instantly producing his comment, sacrifices the future for the present, a reverberating work for a trickle of reactionary babble. Most scribblers are so insular if someone blinks at them the wrong way they will have a story of revenge, with the blinker as butt, fashioned in four seconds. Yet many people like us would rather only contaminate ourselves with these germs than relish a future in which the objects of our scrutiny read the published text and recognize themselves as treacherous but sloppy, adjectives that don’t accurately describe them, except that tall and from Toledo are too telling to dismiss.

Such a future rarely occurs. The myth that people the writer knows will populate his stories has been too often forwarded to be seen for the type of truth it is—useless. Sure, our mothers get in there, first lays and enemies too, but so does the mother of a friend we met once, as well as the mother of Balzac, pictures of Hiroshima, Paul McCartney’s voice in “Yesterday,” and the taste of fried plantains. Living gets and gives itself to us every second and everything adheres and anticipates—as our nose nears the smell of smoke, our head bargains with our belly about what sweet treat could be cooking.

The goo of life grows fat with our age and our internet age. Everyone has a comment ready, and most everyone has to tell their story—for the unsuccessful writer to tarry toward this programmed cult of culture is a grand misstep. On the internet, the quack and the curiosity get the most attention though they gain little but ignominy in exchange for their souls being plucked. By avoiding this vicious interchange, the unsuccessful writer might find himself bending to a more unilateral strike and pressing his screeds into parable form or a more endowed précis. One’s duty should not be to the lethargic comment, but to the aptitude of one’s anger. Troubles dominate our thoughts and those who have not weathered have no book to write nor need to read one. Who better than the unsuccessful writer to squawk about the indignities of the more feted in the world? Being the dismissed provides a greater perspective—it humbles.

A relative once said to me, I don’t want to read a book about a normal person in an extraordinary situation, I want to read a book about a great person, but my blood unwittingly spoke of the same thing and if he had ever gone steady with E.M. Cioran, the crotchety Romanian, master of despair, champion of the unsuccessful writer and artist (“To venture upon an undertaking of any kind, even the most insignificant, is to sacrifice to envy”), he’d see the dispossessed often make more intriguing characters with Melville’s Captain Ahab, Beckett’s batty ne’er do wells, and Nabokov’s Humbert Humbert atop this dastardly pyramid. And so the unsuccessful writer can be a hardy weapon who has no end as device or character because he is very willing to persist in the vacuum. Though ham-handed in handling words, this writer can make a clearing in others’ consciences—telling them it is alright to be alone, afraid, and awkward. He has his rightful place in the pantheon as the mirror of the artist—the extremity that doesn’t fit, the body repelled by other bodies, other minds.

Cioran was only too prescient in his bolstering of this quicksilver emotion before the age of the anonymous internet graffiti artist. Envy doesn’t carry the unsuccessful writer to a right success but it points him to the more correct form. He doesn’t so much acquire envy as garner it in installments. But when he comes into a more crucial understanding of the term, it attaches its spirit as burrs to wool socks. How precious this emotion will be, the unsuccessful writer won’t know until he’s lived through a night where he could not write one sentence. Seen sans its imprimatur of a routine shit smear, envy becomes an indubitable object on the toolbelt—valued and weighted as much as hate, sadness, joy, and exhilaration. If we’ll always remember what it was to be happy our envy will not be so accommodating—the verges of the mind become very adept at scrambling data, as ordered by our egos.

Envy lurks. Out of the many writers I’ve met there’s not one who hasn’t told of some other scribbler who gets too much attention. Envy transposes our base will so it can foster a cleaner living, though keeping many in an invisible debt. When we envy, we empower ourselves. Like love, it connects and repels, and those who serve it often don’t know how much they cherish its buttered and unbuttered sides. Sand to hold and fire to touch—envy is more than the best bitter slap to our angled impression that any deed not searing our skin fails us and so is unworthy. If one unsuccessful writer counsels another to make friends with envy, imagine this command is just short of shouted. By doing so, pride won’t succumb to superstition, and while being submerged in this truer bath it won’t sabotage the creative impulse.