A small food and beverage licensing office in the town Corrty Pye, Michigan was showcased by interdisciplinary artist Sophie Durbin on March 16th, 2016. The installation takes shape of an office set in the year 1972. Framed within the venue Modus Locus, a seventies office sits, empty of its tenant.

The town of Corrty Pye is Durbin’s magnum opus. It is a fictional place that she has been crafting since her childhood, inspired as much by a small suburb of Detroit she would travel into for piano lessons as by mysterious, out-of-context illustrations by Edward Gorey. In the past, the town has manifested through Durbin’s determination to mold it as an affective destination, either as poem, drawing or prose. In March a fragment of it was erected for the first time in the three-dimensional form as CORRTY PYE MUNICIPAL OFFICE #4. At first glance, the installation is congruent to that of an office space occupied in the 1970’s. [IMAGE 1] Through meticulous rendering, Durbin captures a snapshot of an empty office in the middle of the work day. Both formally and conceptually the installation considers history in regards to the interior as well as the political. In this, the artist has built an environment that is sensory, emotional, and tactile. 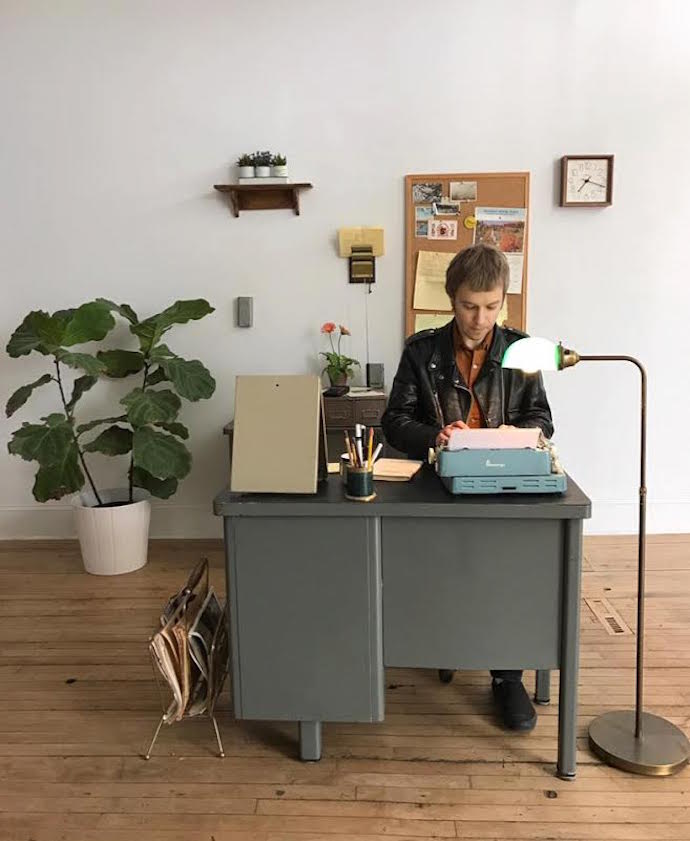 The signs of an office is captured with ease and one understand where they are. Given the visual cues, smells, and sounds the installation translates successfully the tenor of the seventies. Likewise, the formal elements of the installation set the foundation simulating 70s. This is further noted in the furniture chosen as well as the decorative accessories, such as the indoor foliage, the avocado colored office chair, and complementing hues of brown and yellow found in the occupant’s appliances, postcards, and decorative nuances. However, this isn’t a sterilized stage, built as a still life. This is not a glossed over space that glistens with hopeless nostalgia and showcases only the best of the best from the period. no. It is a lived-in space. Not messy, but worn and inviting; it is human. This space belongs to someone, confirmed with the sight of steam wavering from a cup of freshly poured coffee, the sounds of WPYE “The Pye” streaming from the radio, and the lingering smell of a stamped out cigarette hidden in the draw.

But the owner of this office is absent; their absence is a signal to investigate.

The audience transforms into detectives, as they wander through the “minutia of mass culture to the larger structures of feelings” that is built within this resurrected interior. (Dickens, 1) Through the role and subsequent power of The Detective, the interior is exposed as a space laced with the self, the historical and political. 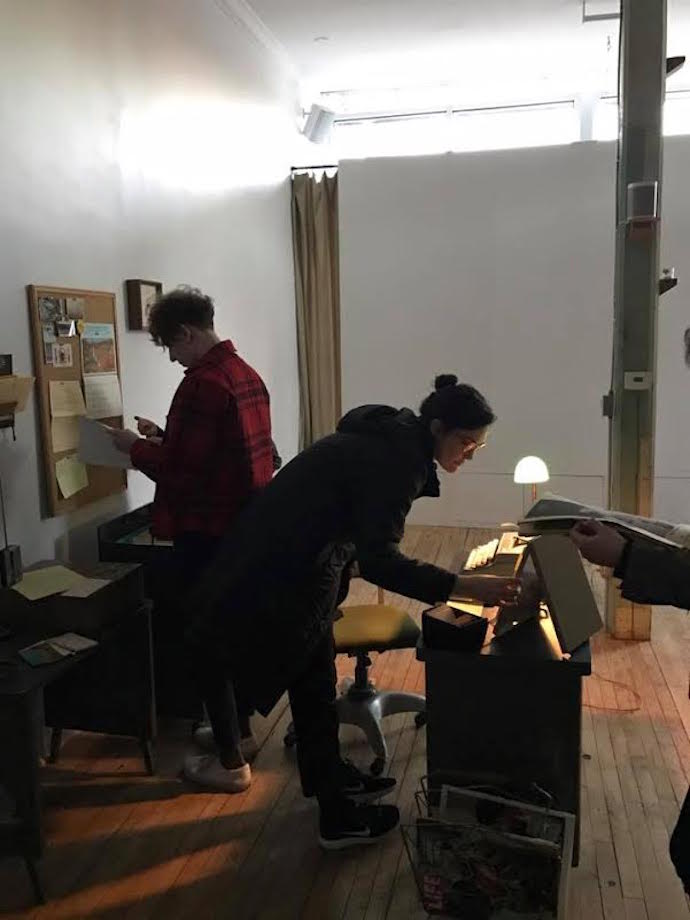 The act of investigating completes the installation. It is not an image, nor a sculpture. The installation is an interior. Durbin is seemingly acute to the significance of the banal and the possible role of detective. This is not Benjamin’s, Kcaurers or Jameson’s detective, for the Flaneur is a wanderer of the city. The detective that Durbin encourages is something we always already are. We are readers of spaces, navigators of interior hospitality, who are attuned towards the purpose of an interior spaces, which is to translate its utility, or usually a mood, or a person, or a sentiment. In most cases, it has the capabilities to communicate all of the above.

Interiors oftentimes mirror intentions; it is a space that must simultaneously be private and public. A kitchen looks like a kitchen because it has the corresponding appliances and furniture in which that space would need to function. But interiors are also our confidants. Within them we deposit our hopes, fears, love letters. In other words, they capture our interior selves. In Corrty Pye Municipal Office #4, as with previous installations such as last year’s group show “Soft”, Durbin appreciates and utilizes the reliability of the semiotics within space, and the power the quotidian. Within the crevices, drawers, and files of the office you are drawn further into what the work and life of its inhibitor, who is revealed to be Ms. Marguerite Thatchner. Scattered within the installation are fragments of Thatchner. One works at getting to know her by peeling back the layers of the interiors. Thatchner’s work, and likewise, her work space, are not separate from her self. When the layers are peeled, what is found is the sensitivity of the interior to time, space, identity and politics. What is found is not only a mirror of the seventies & Ms. Thatchner, but fears of today’s fluctuating and threatening sociopolitical climate.

Where has she gone? She left her coffee and a stamped out a cigarette. Listed on the calendar is the day: November 8th, the day after Election Day 1972. Can you recall the moment? It was a mixture of Nixon, Watergate, speeches which laid the groundwork of social revolt and civil rights activism. Election day has just taken place and Marguerite has left her office.

The interior evolves, past its formal convictions and into a portrait; it is a whisper of a history, turned into a sigh of a person, with the opening of files, the reading or reports, newspapers, and secret letters. It is the interiority of this installation that stings, that makes you say “god damn” that makes you want to know These Things, that makes you feel like you might already. It is because of the lesbian zines, publishing the works of Valerie Solanas, hidden in the Life Magazine title “Nazi’s Son Captured.” It is the Women Who Work newspaper (and no, it is not featuring spreads of glamorous women in high heels behind a desk holding their children.) They are sketches and their power is in their pen and their publishing. It is in their visibility. It is in the postcards nestled beneath a comic book, from Meredith, also seen as “M”. Their letters swift in the prose, latent with longing. It is the traveling wrought iron. It is the cursive. It is the note on the planner which notes that she’s spending it with M. All of these Things capture you.

In regards to the absence of Marguerite, it is also a response, a qualifier for resistance. She has left to be with the ones she loves. A feeling reminiscent of this past November. Durbin posits that through the installation she worked at “trying to imagine a different time and place where people were collectively feeling just as betrayed [ … ] everyday that week after Trump was elected there was this urgency to get home. To get out of my office. To be with my loved ones. To comfort each other. I was wondering if maybe she was feeling that same way.” Did we all not suddenly leave, much like Marguerite, and cling to our beloveds, our comrades, our family?

This interior that Durbin has foraged is not an exploit of an era, or person, nor is it escapist. The space is a tool to introduce The Detective to time and space as reactive. Its formation dependent on a person who felt, like many did then, and do know, the fear of being seen. The fear of what may come. The things that Thatchner cherished (her lover, equal rights) were clandestine, hidden under what things that could be seen. Why? Because the consequences of having them out was not a risk she was willing to take?

As an interior space, Municipal Office #4 works to develop an image of managing one’s expectations, one’s disappointments, and one’s fear of a systematic state that turns us, our friends, and neighbors away. When this seemingly representative disappointment occurs, we turn inward, towards the crevices and alcoves that act as hosts to our hopes, fears, and imagination. We turn towards our shelters and our beloveds.