“I wasn’t helpless at all. I wasn’t a beetle.” : A Review of Colin Winnette’s The Job of the Wasp 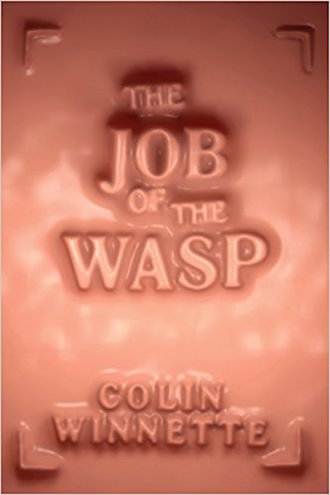 I have heard instructors outlaw death, pop culture references, and crying in stories. The same for weather. We expect renditions of humanness, yet we strip humanity from texts. Banishments are tired excuses for weilding academic influence on those without institutional power. Fuck this confounding rhetoric, and thank gods Colin Winnette is not one of those writers, The Job of the Wasp not one of those books. A writer whose work absconds tradition on a quest for making new myth, Winette’s previous novel, Haints Stay, mixes acid western with horror to full effect. He has worked in post-apocalyptic literature (Revelation), and his fictions do not easily settle into one genre. He can also write about the real world—read the novella Coyote for evidence of borderlands horror—and his early work, Animal Collection, suggests a world of stories in the mode of bestiary. Throughout, Winnette’s characters are well-considered, exemplars of story action. I can’t think of a more exciting writer book to book, never knowing where along the spectrum their work will fall.

In The Job of the Wasp, we not only invite corpses as well as their problem of concealment, but we root for death to show itself. This is the story for our unnamed narrator, the overweight new boy, who can’t remember names at the boarding school. As soon as bodies begin dropping, dead, into his life, we are afraid. There are rumors of murderous ghosts. We suspect authority figures of plotting to frame our narrator. We don’t trust anyone, let alone our own perceptions. We look for meaning between conversations, interior dialogues. The Job of the Wasp, then, showcases the fun of the murder mystery within the gothic tradition. This is not an old gothic text, where environmental fear makes us retreat further inside ourselves, no, this is a revitalized gothic, where fear is controlled by our institutions, forcing to us act out of turn. In The Job of the Wasp, we are victims struggling against circumstances controlled by unseen forces. We are young, and fearful of the world. What cruelty lurks behind a shadow? Why can’t we weep openly without scorn? Why doesn’t weather menace our stories? And we get no answers, not entirely the better for it.

Issues of control permeate the novel. How do we assert our existence against the force of the state? The state wishes to remove our individual agency and make us act beyond our means, dividing us. But our struggle is intersectional. Here, dishwashing line is as good as death for the boys, some working with the Headmaster, “still after nothing more than a little food and a roof over their heads.” Gardening is less foreboding generally, which is where our narrator turns up the first bodies. Our narrator’s allegiances create problems for him and his brethren. No one is wholly aligned. For example, when our narrator asks Nick about ghosts sacrificing boys, he is rebuffed with rationalizations, possibly handed down or made up:

We’ve all witnessed something out of the ordinary at one point or another, but it is difficult to distinguish between the elements that truly compromise our shared experience here and the extra-real moments we experience only as individuals. Where is the line between the world we share and the worlds that exist exclusively for each of us?

In other words, who controls the narrative of the ghosts, the recurring murders, controls the power. As our narrator pushes to reclaim the truth from multiple institutions not limited to nature, school, and his peers, it is as much a secret as orchestrated by some genius puppeteer: “We are provided the bare minimum in life and expected to act in a civilized and synchronized manner at all times.” This is the gothic element in full swing, masterfully executed by Winnette. In The Job of the Wasp, no institution is sacred. Friendship, politics—they are all gunning for us.

A killer analogy runs through the text, from which Winnette pulls the name of the novel. Wasps reside in a gazebo, riding out thunderstorm that shakes the facility, and its residents, to the core:

Somehow, incredibly, the wasps and I had reached an understanding. I meant them no harm … and they knew it. They weren’t interested in me other than as a surface. Something along which to move in their pursuit of safety for themselves and the rest of the hive. They were finding their way back to the life they knew and understood. I realized then that, though the other boys were predisposed to dislike me, and some of them were under the thumb of our murderous Headmaster, what they were trying to do all along was this very job, the job of the wasps.

More than one pivotal scene happens inside the gazebo, until then useless lawn ornamentation. These are points of immense discovery and reflection for our narrator, not only in terms of narrative action, but the guiding principles of wasp infestation: Risk punishment for misdeeds in the gazebo and be stung. A lake lights up like a black hole when thunder strikes. Winnette has drawn an imprecise yet lasting landscape with The Job of the Wasp, and sees its applications slugged out like bureaucracy, leaving our narrator to pick up the pieces. But the pieces keep changing, allegiances shifting uncontrollably. More and more secrets get dug up, perpetually keeping our narrator in harm’s way.

However, reckless institutions can be undone. Their power is illusory. It is for these reasons The Job of the Wasp serves as unlikely political allegory. The facility poses as façade for power, the last dredges of influence. It is no coincidence that Winnette elected to set his novel here. The Headmaster speaks with a clever, knowing “levity.” He is composed, sinisterly. These are the borders along which vestiges of power escape. Along which futures are redrawn, power recaptured. Our narrator is thrust among liars, impostors, and manipulators in the school. He never fits in, sticking out among the boys. The system betrays him, tricks him in compliance, or else turns his theories on their heads. He races against an invisible clock, looking to correct his quest without sympathy or support. At every turn, he feels trapped like the corpse hiding in his closet. Kudos to Winnette for spinning such a bone-chilling novel. We would be wise to question our own allegiances for once. The Job of the Wasp seems to ask from where do we take power, comfort—and how often at the expense of others.

Tags: Colin Winnette, The Job of the Wasp