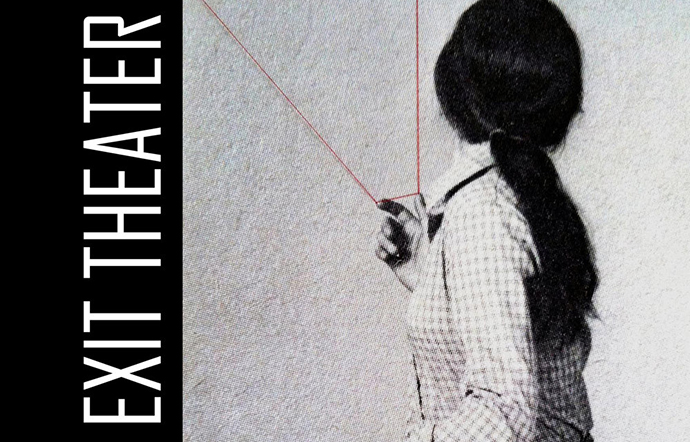 Wait in Union Square long enough and inevitably some puffed-up, bootleg Baedeker walks by and proclaims, “It’s tracking the national debt!” He is referring to Metronome, an LED clock that displays the time in 15 digits. The current national debt requires 14 digits, assuming that you are not counting cents, which you can’t do without a very refined clock that may not exist. The penny does not map onto any recognizable unit of debt time. If you’ve ever seen a “real-time” visualization of national debt, it is a dizzying spectacle that can only generate a folkloric sense of debt. The debt sense constitutes a vague feeling that something is accruing although I don’t have the economic wherewithal to say whether it is good or bad.

Enter Exit Theater (2016), Mike Lala’s debut collection from the Center for Literary Publishing, a book that challenges and resists the vague accumulations of knowledge upon which regimes depend. Across four sections, Exit Theater activates its readers and its texts by effectively manipulating the dictates of performance and poetry to undermine mass media and global catastrophe. It is a book that neither assumes nor denies your participation, but utterly exhausts it.

The poem “Suite w/ a View for the Ends of Our Days (Three Plinths)” comprises three sections: lyric prose, margin notes, and URL citations. Ostensibly, it is a poem about ecological crisis and consumerism. However, “Suite’s” account of climate change is unique in that it resists appeals to journalism and hard science as well as quotidian condemnation:

“I like my lips red,9 despite the petroleum,10 the forests cleared in Indonesia.11”

By dint of genre bleed, Lala troubles expectations for how the text will perform. While it is comfortable to encounter prosopopoeia in the lyric section, “fake silks, blown glass, bulwark steel edge of sidewalk1, taxi cars’ yellow aluminum up to 6th whispering Soon (& finally) the grain will fail to polinate2,” we cannot call this foreboding message comforting. This distinction between primary and secondary comfort presents a problem for the lyric poet with a message, damned to forever add to the welter of what all has been said before, and earnestly at that.

The corresponding margin notes for 1 and 2 in the above quote function something like we might imagine, further clarifying what the poem may have justly omitted for aesthetic and formal reasons. Note 3, which appends the single word “Blur3.1” to a chromatic description of “pink sliding into orange3,” is something of a tipping point. Note 4 begins a lyric confession:

“I, more frequently than I’d like to admit, catch myself in a lapse of attention, trying to look through, not at, my phone.”

This meditation in turn triggers the next margin note about Robert Frost. It is precisely at Note 4 that the margin notes become more interesting than the prose block. Depending on how you look at it, it flips the usual inter/intra-textual tension wherein margin notes pull the reader reluctantly away from the main show. In the particular case of Note 4, the unexpected encounter with the speaking self in the margins jolts us from our usual habits and expectations, causing us to question authorial stability.

In lieu of being links, the URLs present themselves for our aesthetic consideration. What information do they contain? Salient words like “theater” and “environment” suggest that the URLs are involved with the poem’s lyric project, but can we be certain? Should one carefully type each URL into a search bar? Very quickly we return to a well-trodden question: Should we trust poets? But, with just slightly more effort, we come to a more interesting question: Should we trust our reading? Are we willing to read what these URLs represent? Do we already get it? What are the consequences when environmental activists are not willing to perform their arguments any longer?

The whole book is a marvel of genre-straining performances, all of which complicate distinctions between reader and text. In addition to treating environmental concerns, Exit Theater engages in a polyvalent expansion of the discreet boundaries presented by the pithy phrase “theater of war”—a tool to help us accumulate vague, comfortable knowledge. It seems against the project to enumerate all the concerns and sources the book takes up, but I always appreciate poets’ references: Frost I mentioned, but also present are Catullus, George Herbert, Cy Twombly, Guns N’ Roses, and numerous others.

Lala’s long poem-section “In the Gun Cabinet” serves as a sprawling multi-genre centerpiece, but his later poem “Twenty-Four Exits (A Closet Drama)” exhibits many of his best sensibilities. It consists of two main types of text: dialogue lines, and what might be broadly called scenic descriptions.

The dialogue text is not natively a dialogue. Instead, the dialogue is a cento formed from fragments of texts from mass media with titles including “US-Most wanted Al-Awlaki Killed in Yemen Airstrike” and “Iran Reports Killing of Nuclear Scientist in ‘Terrorist’ Blast.” By placing these textual fragments together, they seem to tell a single story: “Saba reports / al-Awlaki killed / Two weeks later, at a cookout / his 16-year-old-son.”  This accomplishes more than a mere détournement of newscasters’ claim on truth. Knowing that these lines came from disparate news reports, we begin to wonder what loom we possess that lets us weave these threads together and call the fabric a story. As readers, we are performing these speech acts, but we are also performing their logic.

Contrasted with the dialogue are Lala’s own interventions into the poem, taking the form of grayed-out descriptions and stage directions. The description of the scene in which “Twenty-Four Exits” takes place seems familiar and innocuous:

“A Theater. White noise from the speakers, white light
under the curtains. They part to reveal a large, brightly lit screen.”

Slyly, the distinction between poemic scene and self-generated images dissolves as we are confronted with a floating image off-screen:

This reads to me as a familiar scene in a movie about international espionage or covert wartime correspondence. It’s a dangerous confusion and in the wrong poem it would serve an entirely different agenda. In the wrong poem, it would go onto the image heap that we reserve for the war imaginary, but in this book, these moments remind us that we are constantly constructing and co-performing these acts of war.

In and of itself, a reminder of our own complicity in America’s ongoing wars is vital work, but Exit Theater raises our awareness of how we make meaning and dodge responsibility. It doesn’t read like an imperious indictment, but asks us to reexamine, along with the text, our assumptions about our surroundings. The show continues unabated, neither gaining nor losing momentum. If we are in the theater with these poems, then trying to find a way out becomes a creative endeavor that must end in action.