Further Research on the Role of Human Tears

“I am now, more than ever, aware that research on crying in the ‘sterile’ laboratory setting has major limitations, in particular because it often lacks context and ecological validity.”
— Ad Vingerhoets, Why Only Humans Weep 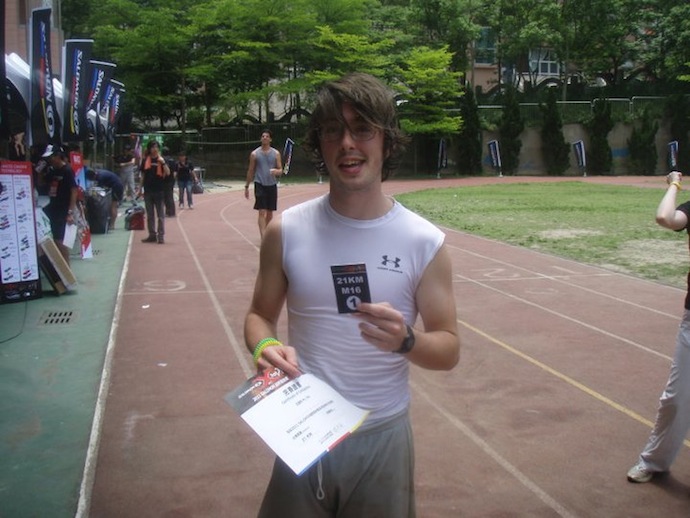 I am running a race in Taiwan. It’s a half-marathon, but has taken as long as a full marathon because it’s a trail race, along streambeds and tectonic hills that entail lung-searing changes in altitude. I’ve been training since I moved to Taipei, where I met a group of runners. I run with them every weekend, and during the week I run by myself too, along the concrete-framed river that traces all the way to the greasy suburbs in the south. I’m wearing a watch, but I don’t look at it. I try to lose track of time. I run. I sweat. Then I lose so much salt that I stop sweating. My thighs, covered in salt crystals, begin to rub together like sandpaper. Spectators along the course inform me that I’m in fifth place.

Around mile ten, I piss in my shorts. It’s eleven in the morning by now and in the subtropical late spring that means it is dangerously hot for a race. My bladder bulges, because in order to avoid dehydration I’ve been taking in liters and liters of water. Something’s got to give: either the need to piss or the running. I’m not going to stop. On a straightaway, I look around me. I don’t see anyone. I let my bladder go and more liquid than I can imagine pools and spills out of the built-in underwear in my running shorts. In a few minutes you can’t tell, though, because I’m already soaked from sweat.

By the last straightaway, I can hardly see straight. My legs tumble over each other and when the finish line comes into view they begin to cramp, and I’m afraid I’ll fall and my muscles will give in before I reach the finish line. Somehow, I make it. People are actually cheering for me. Someone gives me a piece of heavy paper printed with the number one and my age group on it. I hunch into a walk with my hands on my waist and wander around the finishing line. There are benches. I sit on one of them and am overcome by a wave of emotion—that’s the only way I can describe it, a wave of emotion, because it comes on the way water envelops you. I begin to sob inconsolably. By myself. Covered in dried piss and sweat, not caring about the volunteers and 10k finishers walking by. I cry for ten or fifteen minutes. Then I’m so tired I can’t even do that anymore. I raise my head. 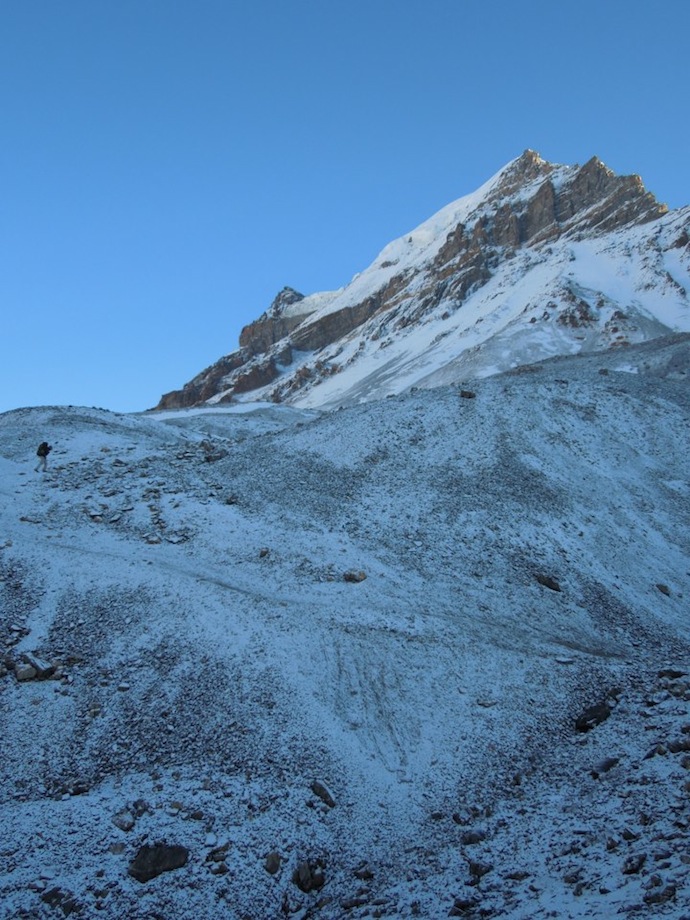 I’m hiking in the Himalayas in the ninth month of a ten-month journey across southeast Asia, India, and Nepal. I have been away from the United States for these nine months, plus the year before in Taipei. I’m cold. There are four other hikers with me, friends of mine, but for some reason this morning the altitude change makes me feel light instead of heavy and my steps become relentless up the 2,000 meter vertical climb to the ice lakes, a day-trip we’re taking during our conquest of the Annapurna Circuit. The trail starts out rocky, but soon it turns to snow. I plow head-down into it for more than two hours, leaving my friends behind. In front of me the trail is footprints barely pressed into the snow, but they are enough to follow. I go on this way for a long time. I have been told it is beautiful at the top. The up seems to never end.

Then I summit. There is a vast, still ice lake cradled in a vast, still plane of snow. Across and past it is another short incline, then a stone monument strung with prayer flags next to another ice lake bordered by a field of snow. The backs of several jagged peaks cast their shadow over the second lake. When I get to the monument, there is nowhere further to go. I sit down on one of the few boulders that pokes up through the snow. It’s freezing, but I am bundled well enough and warm with the energy I mustered in plodding so rapidly up the mountain. I look out on all the undisturbed whiteness. Suddenly I begin to cry.

I remember what I thought about then while shaking with sobs: my family. How far away they were, and how long it had been since I had seen them.

I also thought that it was the most beautiful place I had seen in my life. It still is.

When I was very young, I would repair to my room after Christmas with the LEGO set I had inevitably been given and remain there until I had finished whatever police station or outer space train set or jungle fort was represented on the box. Or until I couldn’t find a particular piece, which happened every few sets. I would search for a few minutes, scanning the instructions and the partially completed set to make sure I hadn’t misplaced something, to make sure that the bright blue corner piece wasn’t accidentally hidden under the green plastic base. Usually it wasn’t.

This was when I would burst into tears. I was inconsolable. I would run out into the hall and my younger sister, who was as good at finding my LEGO pieces as I was at losing them, would patiently walk into my room and sift through the colors scattered on my dull green rug. After a while, she would hold up a bright blue corner piece. Is this it? she’d ask.

I could have hugged her, but it didn’t seem to be as big of a deal to anyone else. My mom and Ellen would return to their reading and Barbies and I would return to my LEGO set, thankful—often to God—that the piece had been included, shamed that I had made such a scene about it, but justified, too, in a way, since otherwise the piece might never have manifested, and that was the most unimaginable thing.

I am at summer camp with Tyler, my best friend. We are rock climbing. After Nepal I’ll move to Colorado, become a passable rock climber, and climb multi-pitch routes that place my friend Brad and I hundreds of feet above Boulder Canyon, leering at each other with joy. I’ll do some scary things, compared to what most people do. Maybe in recompense.

But today I am thirteen and I just can’t do it. The route I’m assigned is impossible. I don’t have the strength, flexibility, or mental focus. After failing over and over again, I untie myself from the rope. Tyler does the route. Sam, the girl I am slowly beginning to love, does the route. I try it again, assured that if a girl and Tyler, who is still much smaller than me, can climb it, I can too. There must be something I am missing. I get on the wall. Its pocks, its stupid handholds, are so small. The spot for my foot is just a little notch protruding from the backward-hanging rock. I’m only a few feet in the air after the first move, but I still can’t make the next. I try and fall, the harness pulling upward through my hips, strangling my crotch and holding me a couple inches above the ground. I try again. Same result. I feel tears welling up inside me, the will to go higher pressing against the inability to do it. The last time I fall, I am barely holding the tears back. I untie the rope from my harness again, sit on a rock that seems to be out of the way, and cry.

Sam comes to me, rubs my back. She did the route. Somehow I couldn’t do it, and now she’s comforting me. Insult to injury.

Tyler pretends not to notice. Which, that day, is a far better gift.

It’s hard not to make comparisons. I think of the only time I have ever cried at the right moment, a time when my tears made sense to me: the day of my grandpa’s death, also the day before I left Cincinnati for my junior year of college. He had been in hospice for a week, and we all knew it was only a matter of time. He was a skeleton in those last few weeks. He had refused to eat. All three of my aunts were in town, taking shifts beside his bed. Then I got the call, and before I answered it I knew it was the call. All my stuff was in boxes, packed into my mom’s Toyota Sienna. I drove it up to the Courtyard—that was what they called the hospice segment of my grandparents’ retirement community—and walked down the sour smelling hall to my grandpa’s room.

His body was still there, as I knew it would be. The door was open. I kneeled down at the side of his bed to say goodbye to him, and before I knew what was happening I began to sob. I felt like I must be faking it. It was too appropriate. Too timely. My mom left the room. I thought then that she couldn’t stand my grief on top of hers, but now I know that it wasn’t exactly grief for either of us. It was the inevitability, the fact that what we knew would come had come. And the fact that knowing didn’t change a thing.

The last time I cried was in Boulder, under a tree on the south side of the University of Colorado. It was dark out, thank God, but I was with E., and we had just come to watch the campus version of American Idol, a three-hour affair of undergraduates singing their hearts out to commercial pop. I had just won a chapbook contest. I was going to have my writing put into the world and I wanted badly to celebrate, to act like the amazing person I had suddenly begun to suspect that I was. I grumbled throughout the show. When we left, I made snarky comments to E. about how stupid American Idol was was, how much I had hated sitting there. We got to talking how I was being negative. I got to talking how I was tired of doing stupid stuff, I wanted to do fun stuff, and I was frustrated and…

I got to a point where nothing I said made sense anymore. I started crying, maybe out of simple confusion, maybe out of a vain shock at my inability to not be an asshole that night. My sobbing became uncontrollable. E. wanted to know if she should stand by me—all was forgiven, for now—and I told her she shouldn’t. I just needed to be by myself for a few minutes. It was like I was leaking and I had to wait until everything left me. Until I had emptied out enough to let something in again.

Sometimes I like to think that I’m a good person for nearly crying when she broke up with me. E. was in tears and even though I was on the receiving end of the break-up, I felt myself welling up on her behalf. I knew how hard it was, how hard I was making it for her.

But I didn’t cry, and I’m perversely proud.

I’m not that good, I tell myself. I cry for me.

Dennis James Sweeney hails from Cincinnati, Ohio. He’s the author of the chapbook What They Took Away and writing that has appeared in Alice Blue, DIAGRAM, Juked, and Unstuck. Find him in Corvallis, Oregon.