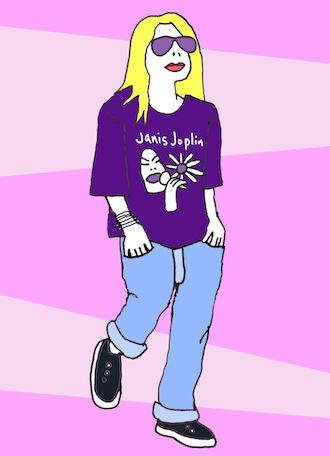 Sometimes I get so grossed out in American Girl by Tom Petty when he says, take it easy baby/make it last all night, & I think he might be talking about sex. I get scared when I’m listening to Sugar Magnolia, how Bob Weir says, saw my baby down by the river/knew she’d have to come up soon for air. Like he was trying to drown his girlfriend or something. He compares her to a flower, & he lets her pay his speeding tickets & she waits backstage & then he kills her. And I wouldn’t put it past him really. Like how Maynard James Keenan called Hartford the dry cunt capital of the world, or how Ozzy yelled let me see your tits, babes at Ozzfest. And we didn’t know what to do except to pretend we didn’t hear it.

The way Jerry Garcia says first one says she’s got my child but it don’t look like me/ We were smoking pot on a porch with three hot brothers with ponytails. One of them made a dumb blonde joke but I was too stoned to understand. On Hey Joe, how Jimi Hendrix is singing about a guy who kills his girlfriend. And you can tell from the way the music keeps going at the end that nothing bad happens to him. I put on Lucy in the Sky with Diamonds & laid on my bed, imagining Jay trying to kiss me. I put on White Rabbit by Jefferson Airplane & imagined myself falling down a rabbit hole.

My Stairway to Heaven poster glows in the black light & so does my nail polish. On Wild World, how Cat Stevens says, don’t be a bad girl. Jay wants us to get married & live together forever in his green Volkswagen bus. He kept moving my hands on his jeans in the basement. At the end of Jealous Guy the way John Lennon says, watch out & then look out babe. I wrote all the words to Going to California on my notebook for dramatic effect. I smoked all the all-natural cigarettes. They say she plays guitar and cries and sings. Maybe someday I went.

“Nothing’s gonna change my world” – Sylvia Plath
“I was feeling nearly as faded as my jeans.” – Janis Joplin

To dress like Janis Joplin or to dress in a Janis Joplin shirt.
An Extra Large.
To keep drinking the Southern Comfort or to put it down.
How 90s girls’ clothes could never get big enough.
To stay in the black light. Watch the colors change.

She said my figure was swimming in the t-shirt.
He said my eyes were like a swimming pool. & he fell in.
Just kidding. He pushed me in.
It was summer. The dead of summer.

Laid on the beach like a corpse in the sunset.
All of my rings arranged in a ring catch.
The 33 brought me right to Haight & Ashbury
just like a magic carpet.

I had my mom’s shirt from the 70s that looked like Drew Barrymore’s in Mad Love.
I had the Janis Joplin shirt with the big daisy on it & a picture of Janis that was the same size as the daisy.
Carrie looked just like Janis when she put the dandelion behind her hair.
And the crazy pearls around her neck.
Violet crushed-velvet skirt like I was following a trail somewhere.

It was 1994 and I started having this feeling.

Like underneath my hair it was a bald person’s head.

And underneath my head was a skeleton.

I got a motherfucking hole in my embroidered hippie backpack.

I sewed a Grateful Dead skull patch over it with my own two hands.

There are a lot of things that fell into that hole.

So many things that I lost there.

My other mood ring.

The Kiss t-shirt that Courtney Love shoplifted in high school.

The baby-blue baby-doll shirt I stole from the mall.

All our favorite songs & their best lines.

The pen you had that looked like a syringe.

I have a skeleton underneath my skin, I am serious.

My veins are a really pretty shade of blue.

I was just daydreaming.

I was stargazing, headbanging.

I dove into the pool with all my jewelry on.

Like I was a puzzle in all my facets.

I curled my fingers to make a heart.

I wrote you a love letter.

Torn-up jeans with holes in the knees.

The Brunette with Glasses

This is a project that me and my 8th-grade best friend worked on together where we went through all our favorite albums and made mix tapes of our favorite songs and pulled out all the words that were insulting to women. Then threw them at each other. Jay’s mom called us “Pretty Girl,” and “Dirty Hair Girl.” The emotionally and artistically complex brunette. The sandy-haired hippie chick with Meg Ryan’s eyes.

XY, you’re not like me. You don’t sit up all night afraid that you’re getting old. I was stopped dead in my tracks on my walk to work by a raven or a crow that landed on the sidewalk in front of me, skidded to a weird bird halt. I have had three dreams about owls and three times in the past week when I ordered vegetarian they brought me red meat and my feet carry me.

“Takes the wheel when I’m seeing double. Pays my ticket when I speed.” XY and I were at this boring party in California getting beer from the refrigerator to sit on the deck like how he always loved to sit outside ‘cause it reminded him of nature, and he was a smoker. And he told a joke that went, “She grew up in an Indiana town” and I thought, yes, this is love, this is love, XY, this has to be love.

It was words from “Mary Jane’s Last Dance” by Tom Petty, like when my mom tried to change the station when he sang, “She’s standing in her underwear,” and I stopped her saying, “No, it’s okay because she’s dead.” In the video she was dead. Pretty Girl told me that Mary Jane meant weed, and that death is a symbol.

The beautiful dumb blonde, all words. The smart, sweltering brunette, all ideas. We’d go to shows and to parties and tell people, “We’re the same person.” And everyone thought we were twins cause we were so alike in our minds it made us look alike. Called us “the Bobbsey Twins.” And I swear I felt her stomach ache.

Everyone on the deck was from New England, which means that somewhere inside we still feel the leaves and the summer steam spurts out of our tear ducts and the winter chills our blood stream. XY, I was the only one who got your joke and I got it like a geyser I got it so deeply, and when I got it, it really affected me.