A Review of Gina Myers’s Hold It Down 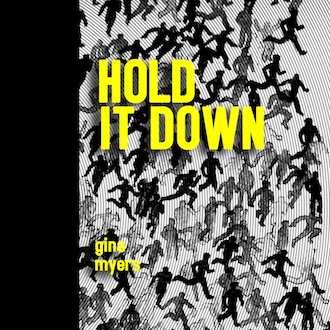 Gina Myers writes real poetry, poetry about life and disappointment, poetry about heartbreak and the insistence on continuing, in a style that sometimes (and only sometimes) reminds me of Ted Berrigan’s more down-to-earth poems. Hold It Down is her second collection, a book (like her first) published by Coconut Books. She’s inclusive in her work, and she writes about the real world in a sense that lets us (as readers) know that it is heartbreaking and difficult. These poems take place in different cities––sometimes Atlanta, sometimes Saginaw, Michigan, sometimes New York City. She’s not a tenuous writer, and her style is clear, but she allows room for “not-knowing” what will happen, all the while being sure of what she is choosing to say. In “Something Maybe,” Myers writes:

Beer can crushed & tossed across
the street. We’re not going to make it.
For an entire summer my life’s
solution was to not leave
my bed.

She uses the simple details of life in various places to weave together narrative and emotional sentences that are conservative in tone, but open and heartfelt too. She writes that “we were never / going to make it. The darkness creeps / over, smears in the rain.” She writes about cities and drinking, Morrissey and Nick Drake, all a soundtrack that lets her live a life of deep feeling. Part of this book wants what’s permanent, wants to make memory from sorrow. Yet part of this book knows that the world is about moving on from the past. In “Twenty-Seven: An Inventory,” she writes about the events of her life, and counts them, too. One of the most telling lines, “3 months of stoicism lost / in a single night’s collapse” is part of this poem.

Myers makes use of borrowed language, too. The language of advertising, cities, theory, and music plays into this book. There is a little bit of irony in some of this appropriation, and it works well with the book’s overall tone. There is even a list of fears in the form of a poem here, including “fear of voids or empty spaces,” “fear of machines or of robots,” and “fear of nihilism.” She makes use of daily news as part of the book, too, taking on the life––however tragic––of where she resides. Her fears continue in a later poem of the book: “fear of picnics,” “fear of taking tests,” “fear of symmetry.”

Four of the book’s poems are called, after the title, “Hold It Down.” In the second one, she says, wisely: “each year I get / / older / / things become less / certain / / this isn’t how / I imagined / / it would be.” There’s also collected here a set of poems called “False Spring,” from her chapbook of the same name, the poems being set in Saginaw, Michigan. In these poems, Myers writes about the happenstances of daily life in Saginaw, melancholy changes, and the little things that make up her life there, and also the life of the world around her. She writes: “The smell / of false spring fools everyone / into thinking things are going to be okay.”

The last two poems titled “Hold It Down” are found at the end of the book, and in the first, Myers writes: “All over the country / people are moving into the streets / & we’re here in Atlanta starting a new life.” She writes about a new place, being there with someone, and getting used to the dailiness of her new life. And in the last poem, “Hold It Down” also, for N & K, Myers ends her book on a note of loveliness and beauty: “Blessed / is this day.” The book ends with words of wisdom: “Not every day / can be a good day / but this is one / of them, one / of the best days.” The reader leaves with the sense that there are moments of love and happiness within even the saddest of times, and that is a good thought with which to end.

Hold It Down is available through Coconut Books.