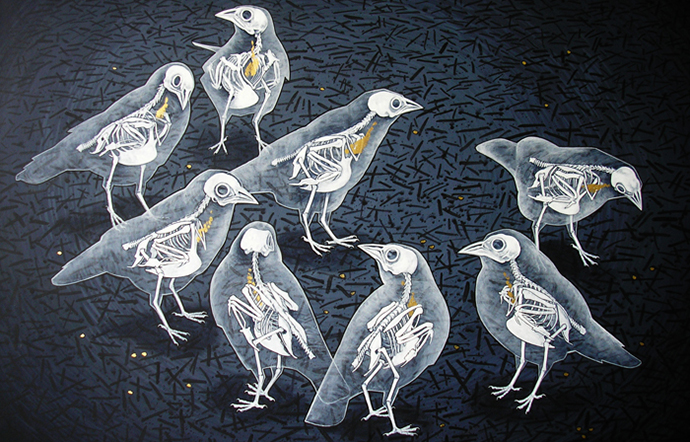 Lately I spend a lot of energy trying to locate misplaced belongings. Keys and birthday cards. My baby teeth, bonewhite and gleaming in my mother’s jewelry box. The collars of my childhood dogs. All kinds of photos, though most sorely missed are those in which my mother still had a full head of hair. Grandma’s watch disappeared down an uncovered shower drain at the pool. I know these things to be categorically the same no matter where I take them so I take them everywhere. At home each night after work I survey my apartment for evidence of change, waiting to uncover some honest answers. When my neighbors fuck my teeth feel loose in my head. I grind my molars. Ugly things continue to manifest on my dinner plate. Sometimes I think about my family and summon the only weapon I have against them: forgetting. At night I keep dreaming of a woman who appears, holds court at the foot of my bed. Mostly she studies her fingernails. Once she opened the nightstand drawer and said I’ll take what’s yours if it’s not what’s good for you. She reached in and withdrew a fistful of dirt.

In my dreams I often confuse anamnesis with sleep apnea and must type out the correct answer forever after as punishment. What is the word for a platitude meant to sow discomfort. I gave my ring to the bartender because it looked better on her. Do what is right, not what you should. I’m tired of my heart. The heart is such a stupid organ. I’ve been fucked by a doctor and he didn’t think there was anything wrong with me. I want to be able to say there are plans that people made for me but I never did get braces. I’m not sure about time. I’ve had to practice being the kind of person who says she’ll be right back and then disappears for months on end. A kid on the subway this morning had shoes that said Your Time Will Come on the tongues. And this heathen weather report. And a couch beached on a snow bank. And the chances are good that the vegetable will respond. I will always approach going to the mall with some level of mealy, tepid nostalgia. We can put it back the way it was but it’ll never be the same. I still remember the day he told me that when his dog dies, he won’t be a boy anymore.

My most memorable childhood field trip was the one my kindergarten class took to turn off the oven at our teacher’s house. That was the year the day care only had one book, a gigantic atlas. I was obsessed with it––I would spend each afternoon with it cracked open on the floor, turning the pages over and over again. Studies show that repetition helps establish neural pathways that prompt emotional development in young children. In this light it makes sense that my first therapist, whom I visited in the company of both my parents at age thirteen, would pronounce me “dangerously self-contained.” This atlas also gifted me in entirely expected ways: in seventh grade I was the National Geography Bee runner-up. When I got the last question wrong I was immediately whisked off stage. I felt the rush of narrowly missing the spotlight as an actual breeze caused by the NBC cameraman who jogged past me to zoom in on the winner. Later in life I developed the fear that any outward effort I made toward achievement was unseemly. What became important to me, as I prepared to apply to colleges, wasn’t surpassing the standard yardsticks of adolescent intelligence––it was doing so with ease so apparent that others took notice. Recently I was contacted by a student at the University of Virginia who was running a survey of former local, state, and national Geography Bee winners, using a questionnaire with a distinct “where are they now?” bent. Did your experience with the Geography Bee have any long-term effects on your major, career plans, etc.? One thing that happened, I wrote, is I’ve convinced everyone I know that someone else must know me better.

The company paid my moving expenses up to a certain amount per day for the first three months after relocation, and the loophole on their end was that the money couldn’t be put toward rent. So I lived in a hotel where the daily act of jamming the key card into the slot in the door and jiggling the handle fruitlessly for several minutes sometimes triggered a migraine. My favorite thing about hotel rooms is the blackout curtains. There was a rotating cast of neighbors above, below, and on either side of me that I pictured as one single entity, an ouroboros of stomping feet and children’s screams and shrieking water pipes and CNN turned all the way up. But for a while I lived beside one family in particular. They were unremarkable during waking hours, just a husband and wife with a toddler, nondescript in every aspect. We exchanged hellos in the hallway and at the breakfast buffet. But at night when they fucked a Russian accent would materialize, and it punctuated the woman’s moans with a single, repeating phrase: Do you understand. Do you understand. Do you understand. Some nights they were so loud and the act was so prolonged that in despair I pounded my fist on the wall between us, screaming: No, I don’t. Help me understand.