I’ve wasted a lot of my life worrying about death. Now, I’m not too concerned about what happens in the afterlife (I’ll leave that debate to the philosophers and the fundamentalists). Instead, my worry is confined to that single moment right before you die, those final seconds when you think: “Shit, I’m about to die. Right now. I’m dying.” It seems to me that this awareness of dying that arrives at the moment of death might be the very thing that kills you. It’s absurd, I know, much like all the years that come before those final seconds. I also know that the art of David Shrigley makes me much more comfortable in coming to terms with the profound hilarity of life (and death). Take, for instance, Shrigley’s death-defying drawing below: 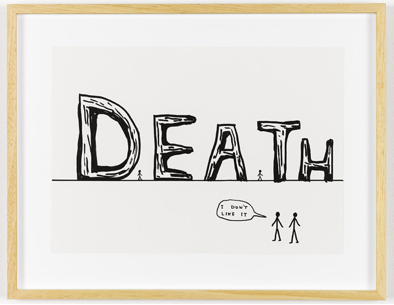 Here death looms on the horizon, but instead of being anthropomorphized as a pale guy with scythe and a robe, Shrigley literally spells it out for us: D-E-A-T-H––death as/is a monument to itself. I don’t like it, one of the stick figures says to the other. And neither do I. If death is art, it’s bad art, Shrigley seems to be saying to us. Pardon my French: it’s a cliché.

Man, if you follow the news these days, the only thing scarier than good old-fashioned death is the absurdity of modern life. Personally, I’m scared of everything, which also means I’m scared of nothing. 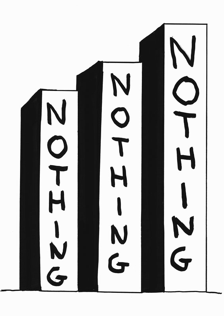 I was out walking today and I wondered if I was headed in the right direction. But the street signs said I was in the same place I’d always been. 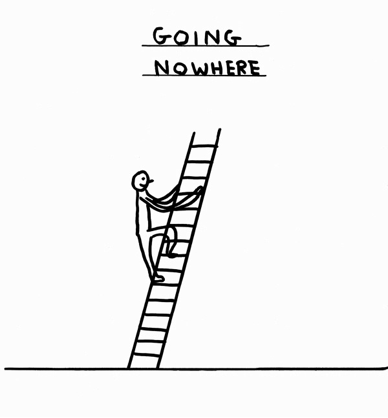 The mythologist, Joseph Campbell, said that a midlife crisis occurs when you spend half your life climbing a certain ladder only to discover that it’s against the wrong wall. However, in Shrigley’s world, we don’t even have a wall. Here the ladder is propped against nothing and the character is going nowhere and it’s even harder to tell if he’s headed up or down the ladder or frozen in fear. Regardless, he’ll end up in the same place. We all do.

Q.: What do you do if you think of numbers and see the word numbers? 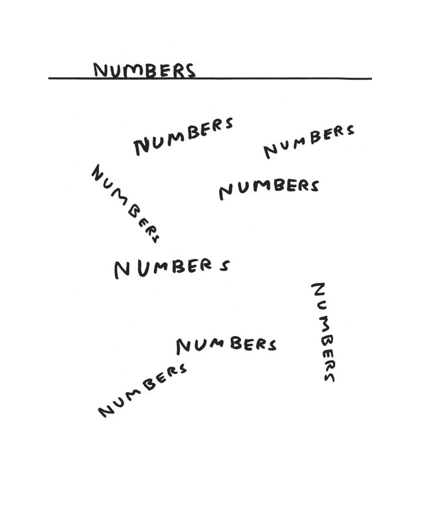 Every day I look more and more like my father. I look at the television. The television looks out of control: on it, a guy in a suit is running away with our future.

Every day I wake up older, but yet I feel the same.

If time is an illusion then the universe is a decent magician.

In a moment when you least expect it, you might hear someone say: Don’t panic. If you aren’t already panicking, then you know you should start right then. If you’re lucky, you might only hear those words once or twice in your lifetime. If you’re really lucky, you’ll find a panic button nearby (if you’re super lucky, you’ll also believe in luck). 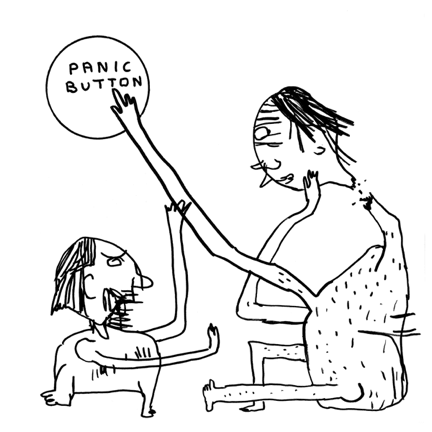 These grotesque figures look somehow familiar. Like you or me and the people we love. The guy on the right is a desperate wreck: head missing, neck snapped like a chicken. It’s a mess, and one of his very own making. He reaches for the panic button while his companion reaches out to stop him. Don’t panic, he seems to be saying while reaching out to help. There is a connection in the midst of catastrophe. Those two words––for once––act as a reassurance rather than a warning. Warning: everything is cool. Don’t freak out. Please.

“Reassurance” means “to take away fear or doubt.” And I doubt that anything can really reassure me, but the thing that comes closest is art.

These days the world is scared. These days we’re scared of the world. It feels mutual, this fear, so I suppose we’re all in it together. And artists like David Shrigley remind us of this: what we have to fear is fear and its origins are both outside and within us. Shrigley’s jokes are no joke. It’s like Muhammad Ali says: The truth is the funniest thing. 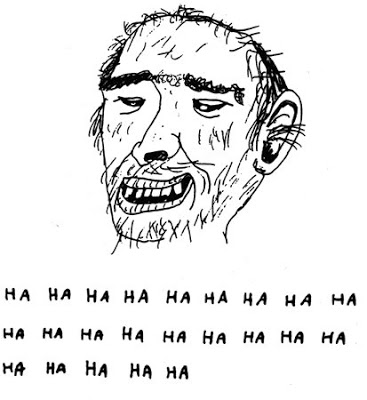 Ryan Ridge lives in Louisville, Kentucky. His latest book, American Homes, is out now from the University of Michigan Press.